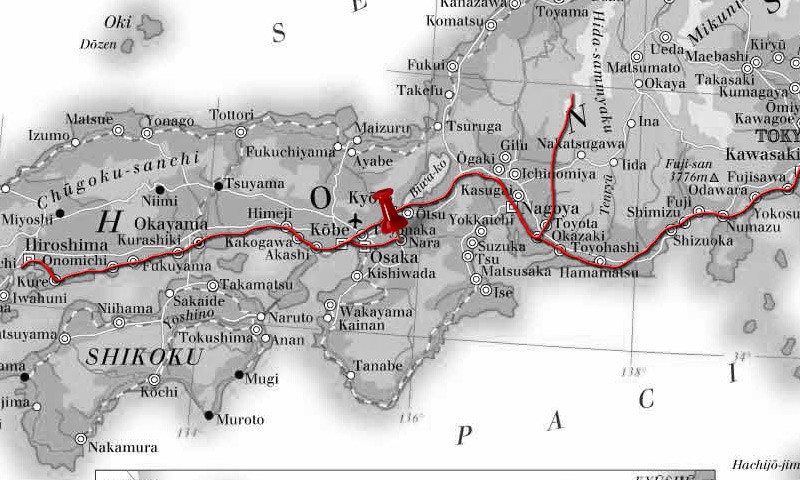 This morning we looked out to see a rainy start to the day. I remember looking at the weather report a couple of days ago and it said today Osaka was supposed to be sunny and 19 degrees. Stu phoned down to reception and asked if they had a weather report. The person he spoke to said "hang on a minute.... um, it's raining". Yeah, thanks for that!

Hopeful that the day would brighten up, we set out and got the train to Nara - this was about 45 minutes out of Osaka. The main sight to see here is the huge bronze statue of Buddha in the Todaiji Temple.

We rook the recommended walking tour of Nara which takes in the east side of the city - Nara Park - and essentially all the main things to see. Stu misread the map initially so we set off in the completely opposite direction, but we were soon back on track.

The first thing along the walking tour to see is the gate to the Todaiji Temple. An impressive structure in itself, but as you walk through it you can see the massive beva king statues on either side which stand guard. These are huge statues, very impressive. It is just unfortunate that they are housed in a fenced off area (I assume to keep them protected) which makes taking a good picture quite difficult.

Once through the gate the path leads up to the temple itself. An awe inspiring structure, it is actually the largest wooden building in the world and stands at 48.74 metres high, by a depth of 50.48 metres. The building was completed in 752 AD, but due to fires destroying the building on two separate occasions the current building was built in 1709 and is only two-thirds the original size. Still very big though!

Inside the temple stands the Vairocana Buddha - one of the largest bronze statues in the world standing at nearly 15 metres tall. It is made from cast bronze which was then plated with gold. Whilst the statue was built in the eighth century, it has sustained plenty of damage over the years. Subsequently, the current hand of the statue was made in the Momoyama period (1568 - 1615) and the current head made in the Edo period (1615 - 1867). It is a very impressive structure and is flanked by two further, smaller gold plated Buddha statues either side.

You are able to walk around the back of the Buddha statues, where there are also other statues to be seen, as well as a model that was built in the early 20th century of how the temple would have looked before it was damaged by fire and rebuilt in the 18th century.

There was plenty of opportunity for Stu to take some great pictures here, but as we have found in many of the big attractions we have visited in Japan, there are lots of people around - particularly big crowds of schoolchildren as well. You sometimes have to fight your way through or wait for a break in the crowds to get through.

A few minutes walk away from the Todaiji Temple is the Great Bell of the temple. A massive bell, and steps have been built so you can walk underneath it and look inside. It seems to be the obligatory 'man' thing to do to walk underneath and give it a whack to see if it makes much of a noise. Hitting it with a coke bottle doesn't really have much effect.

There were a couple more shrines to see along the walk here. We found a good place to have lunch along the way, to keep the energy levels up.

More walking along the route took us past many more shrines, until we reached the Five-Story Padoga. This Padoga is the second tallest Padoga in the whole of Japan (the tallest being in Kyoto). Next to this was an Octaganal Hall - and here our tour of Nara came to an end.

It was still only about mid afternoon, but as we fly to China tomorrow morning we wanted to make sure we got back to the hotel early enough to ensure we have time to pack our bags up properly and get an early night (we have to leave our hotel around 6am tomorrow!)

Once we'd got back to Osaka we reserved our seats on the train that takes us to the airport tomorrow. We also wandered around looking for a cash point so we have cash to see us through until tomorrow. It seems that you cannot use the Japanese ATMs here to get cash out, the only way is to find an HSBC or Citibank ATM. Luckily, we found one right next to the station (after looking a bit lost for a few minutes). Then we grabbed some bits for dinner and headed back to the hotel.

Tomorrow is going to be a long day. We fly at 10am to Hong Kong, where we change and get a connecting flight to Beijing at 3pm local time. So final arrival time in Beijing will be 6:15pm local time! Just enough time to get to our hotel, eat and then sleep ready for the start of our tour of China!

(Sut note: Internet might be sparse and certainly locked down due to the Great Firewall of China - blog updates may become sporadic).