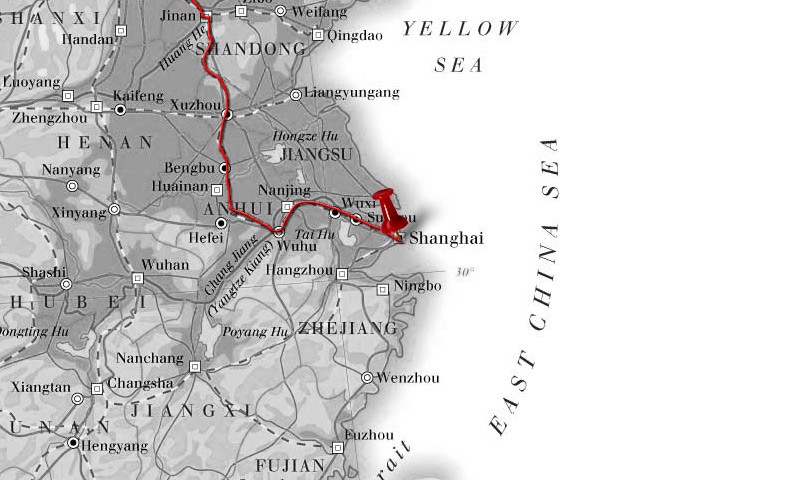 We actually got a pretty good night's sleep on the train. I think I woke a up a few times, but it was better than I expected. The only irritating thing was that they played 'wake up' music at 7am, then turned on the TV straight afterwards (there is a small TV in each sleeper). Unfortunately there was no way of muting it or turning it off. I can't understand why they want to wake you up so early - the train wasn't arriving in Shanghai until 11:30am! Our sleeper was also quite warm, and again the heating is centrally controlled and we couldn't turn it down. (Stu note: it's all part of the communist attitude of defering control to someone else)

In the morning when everyone was up we watched a film on Stu's laptop, and as we approached Shanghai station we packed up all of our belongings. It isn't easy for six people to pack up their bags all at the same time in one sleeper, but we just about managed it in time.

Once off the train we headed to the taxi rank and got in a few taxis to take us to the hotel. Ricky had written the hotel name and address on a piece of paper to give the driver, and the taxi fair was included in our trip cost. Our taxi driver still managed to take a wrong turn though, and had to ask a passer-by on the street where the hotel was - we couldn't really help him as we had no clue and cannot speak Chinese!

We were not sure what to expect with the hotel in Shanghai as Ricky had previously told us that our first hotel in Beijing and our last hotel in Hong Kong were the best hotels we would have. Going on the first hotel in Beijing, I was was expecting the worst! However, the hotel is actually quite nice. It is basic again, as we were expecting, but the rooms are bigger, and most importantly they are actually clean! So we cannot complain at all.

We all felt a bit grubby though after being on the train all night, so we managed to fit in a quick shower before we headed out for our first day in Shanghai. The first thing we needed was food, and Ricky took us to a nice restaurant a few minutes walk from the hotel. We had a banquet style lunch, so lots of Chinese dishes with choices of cabbage, aubergine, chinese bacon and beans, spicy chicken, beef stew, rice, mushrooms - it was delicious once again. There were lots of chilli in some of the dishes, but Ricky advised us that these are just for flavour of the whole dish and probably aren't meant to be eaten (which didn't stop Stu and Tyson!)

After lunch Ricky took us along the famous Bund of Shanghai, where there were many interesting skyscrapers and other buildings. The most intriguing of these has to be the TV and radio tower - shaped like a huge rocket, and the financial building which looked like a massive bottle opener - this is also the third tallest buidling in the whole world. You can go up this building and walk along an observation deck, and it also has a glass floor at the top.

After a walk along a mile of the Bund we met up with the others again and headed back to the hotel for a rest.

Back in the hotel we put the TV on for a bit of background noise and saw a ridiculous advert come on. They obviously still allow advertising for tobacco and cigarettes over here (not surprising as people can still smoke everywhere, on trains etc.). Despite not understanding the language, it was quite clear that they were trying to portray these cigarettes as being less smelly and not making you cough, and they showed one guy enjoying his cigarette while his wife and children sat by looking really happy - very disturbing!

This evening's entertainment was an acrobatic show at the theatre. We all met in the lobby at 6:15pm and got the bus to the theatre.

We weren't sure what to expect with an acrobatic show, and wouldn't have thought it would be our type of entertainment, but we both thought it was amazing and thoroughly enjoyed it. Some of the stunts they performed were truly amazing. It seemed that when a stunt didn't seem like it could get more dangerous, they made it more dangerous! They had various different acts; plate spinning, pipe balancing, pot balancing, bicycle stunts, pole jumping, hoop jumping etc. The finale was the Ball of Death, where they had motorcyclists inside a giant sphere and weaving in and out of each other to the tune of Star Wars! They managed to fit five motorcyclists inside, absolutely brilliant!

So after a fantastic show, Ricky decided to organise a change from the usual Chinese food, and we went to an Italian restaurant instead. I had spaghetti carbonara and Stu had mushroom pasta, with some garlic bread, and it was actually quite nice. Unbelievably, our total meal (which included a bottomless soft drink of coke/orange/sprite etc) cost just �3.90 for the both us. Total bargain!

It was also Ricky's birthday today, so we had bought him a chocolate cake and presented it to him at the end of the meal, and sung 'Happy Birthday' to him. He seemed genuinely surprised.

We managed to get the last bus home just in time and despite the crazy driving managed to make it home alive. What a great evening!