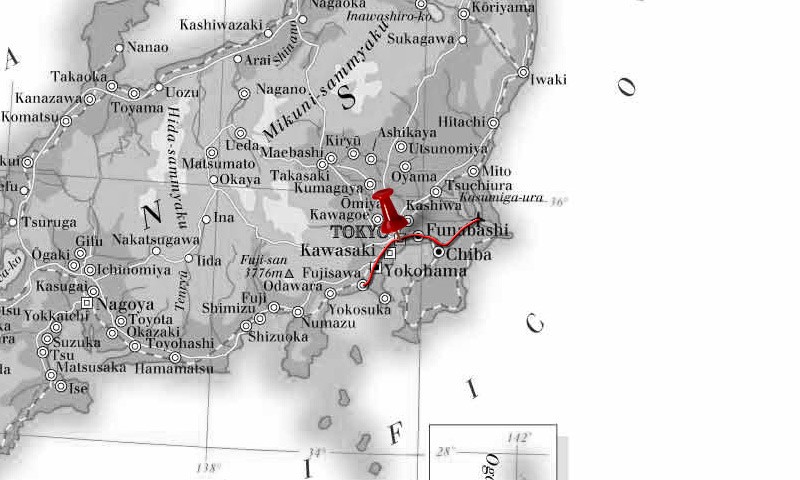 We awoke to a wonderfully sunny day today, at least 21 degrees. The best bit? the humidity has completely dropped and it feels great.

Stu discovered a place called Kamakura after searching on the internet about what we could do today. It's just under an hour on the train from Shinjuku and has some shrines and temples situated there. The Lonely Planet guide highly recommended it so we decided to give it a go. The highlight of the train journey getting there was that we saw Mount Fuji for the first time since our arrival in Japan! The downside is that we only saw it for a few seconds at a time on our train journey so Stu didn't get the chance to take a picture. Hopefully we'll have some more clear weather days and get to snap it another day.

Upon arrival in Kamakura we took a stroll to the Tsurugaoka Hachimangu Shrine. This walk first took us along Komachi-dori ('Shopping Town'), which consisted of a long stretch of lovely looking gift shops and eateries.

We arrived at the temple and had a look round. It was impressive, although it appeared to be a relatively new temple (Stu note: Sarah means built in 1063). A further 10 minute walk took us to the Kencho-Ji Temple - a very impressive temple with some structures dating back to the 13th century. The Hojo (main hall) was of particular interest as this housed the Shakyamuni Buddha and the Fasting Buddha statues.

It was on our way to the Kencho-Ji temple that a young Japanese guy stopped us for a quick chat. He couldn't speak much English at all but decided to tell Stu that I was beautiful! Stu later commented that he didn't think the guy 'was quite right in the head' - thanks Stu! But maybe he did have a point as the guy offered us a gift - a wooden samurai sword! Stu tried to explain that we couldn't take it, but he insisted that we take it, so I guess we had to. He then gave us both a big hug and wished us a happy day. Bizarre! (Stu note: by 'not right in the head' I literally mean one of his eyes was permanently looking sideways and he had a big hairless scar up the side of his temple to his crown).

We wandered back down Komachi-dori to head back to the station as there was another temple worth seeing in Hase. This meant taking 3 stops on another train to get there. But it was only a short trip, and well worth it. Here we went to the Kotokuin Temple which contains the Great Buddha. The seated Buddha, Amida Nyorai, is known by the familiar name of the Kamakura Daibutsu and is the principle deity of Kotoku-in temple. This is a national treasure and was constructed during the 10 years from 1252. It is 13.4m in height and weighs 121 tons - an imposing structure.

There was one last recommendation to see here in Hase - the Hase-Dera Temple. According to legend, in 721 AD a monk carved two statues of the eleven headed Kannon (the Buddhist Goddess of Mercy) and one of these was thrown into the sea near present day Osaka with a prayer that it would reappear to save the people. Then fifteen years later it was washed ashore not far from Kamakura sending out rays of light. The temple was then constructed to honour this statue in Hase. The statue is amazing, covered in gold leaf and containing the eleven heads, each with a different expression to signify that the deity listens to the wishes of all types of people. Unfortunately there was a strict rule that no photos were allowed, but you can find a picture online here. (Stu note: no pictures allowed, but postcards were kindly offered for ¥300. Thanks Monks. Thonks.)

We were however allowed to take a picture of everything else around this temple, including a golden seated statue of Yakuyoke (protector from Evil Spirits) Amida Buddha and the great view overlooking Yuigahama/Zaimokuza Beaches and Sagami Bay with Zushi Marina and the Miura Peninsula in the distance.

It was now time to head back to Shinjuku and our hotel - all this walking can be very tiring! We took the small train back to Kamakura, and then caught our connecting train to Shinjuku. Unfortunately, our return to Shinjuku coincided with the peak rush hour when everyone was leaving work, so we were standing for the whole 60 minute journey! I suppose that is what you get in such a busy city - at least we weren't the ones working!

It certainly was great to see a more traditional side of Japan today, and it made for a great day out.

We leave our hotel and Shinjuku tomorrow, and we are heading to Takayama. We've booked our train reservations, and the first leg of the trip will be on the Shinkansen (bullet train) - can't wait!

Stu just nipped out again to the Tokyo Metropolitan building to get some better night shots of Shinjuku, as the weather has been a lot clearer today.