A Bicycle Made For Two 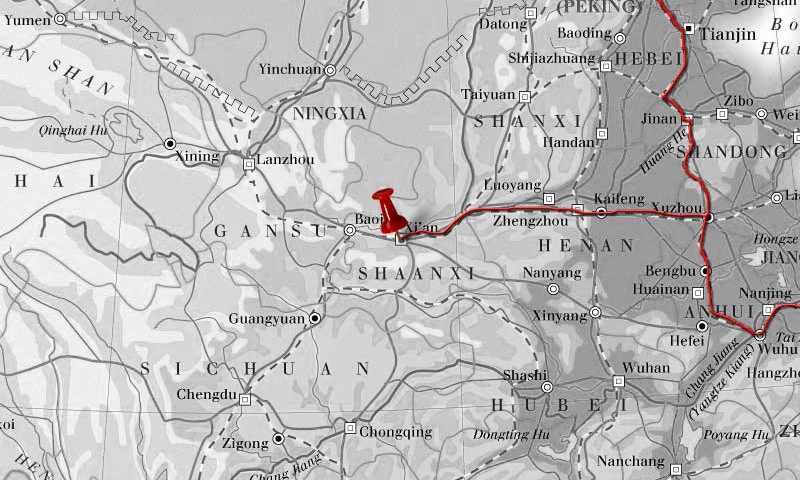 The train arrived in Xi'an only slightly late, around 8:30am. I think Stu had slept quite well. I did get some sleep, but the combination of a rattling train and small, hard bed meant I did wake up quite a few times. I think I woke up each time my arm went numb and I needed to turn over.

A guy blasted through the train this morning shouting quite loudly, I think he was selling breakfast snacks. That finally woke me up in the morning, and I just had enough time to grab a coffee before the train arrived in Xi'an.

Ricky had warned us that the taxis in Xi'an were not that great. After we left Xi'an train station we saw that the taxi queue was ridiculously long, and there were only three taxis. Therefore, we had to get the bus. This was no big deal really as the bus only took about fifteen minutes, and because our transfer transport was included in our trip costs and the bus cost less than a taxi, it meant we could have a free drink when we got to the restaurant for lunch!

When we got to the hotel and checked in, Ricky advised us that he had a friend of his who ran a laundrette and could collect any clothes we needed washing. This was so handy as although it would cost, it would still be fairly cheap (as we are in China) and it's a lot easier than washing our clothes in the sink and having to wait for them to dry. The clothes should be ready tonight, or tomorrow at the latest.

We had some time to grab a shower and freshen up before meeting the group in the lobby at 11am.

Ricky then took is for an orientation walk around Xi'an. I must admit, our first impression of Xi'an is that it is very polluted. The smog here is a lot worse than when we were in Beijing, but Ricky did advise us there were lots of factories and industrial areas around Xi'an.

We took a walk past the Bell Tower and Drum Tower, both very close to our hotel. Ricky told us that the last big earthquake in Xi'an was in the 1500's and people believed that it was caused by a big dragon. Therefore they built the drum and bell towers to ward off the dragon. Ricky said they haven't had an earthquake since these were built! (Stu note: I'd rather they implemented earthquake-proof buildings, like the Japanese)

Next we walked around the Muslim quarter. Ricky told us there are around 70,000 Muslims living in Xi'an, and this whole area has food and souvenir stalls with Chinese Muslim food, which he advised us was different to the Muslim food that Arabic people would cook and eat. There were lots of different types; bean paste chunks, fried spicy potatoes, Chinese pizza, kebabs etc. It was interesting to take a look around.

For lunch we stopped at a lovely restaurant and had our own banqueting room to ourselves. Ricky ordered us some lovely dishes; spicy noodles, egg and tomato noodles, beef, aubergines, sweet and sour pork, rice, steamed bread, spicy chicken (the first dish I haven't enjoyed so far), fried spicy potatoes and pork and celery. It was delicious once again - Ricky is doing well at picking some tasty dishes for us.

After this Ricky took us to one of the city wall gates. The city wall of Xi'an creates a perfect rectangle around the centre of the city and it is a raised wall which is about eight metres wide. All the buildings within the city walls are not built any higher than the city wall, but outside of the wall you do see high skyscrapers and apartment blocks. I think this was once supposed to emphasise the greatness of the wall.

On the city wall you are able to hire bikes and ride right around the wall - a 14km distance. All the people in the group, including Ricky got some bikes, but Stu and I decided to try our luck with the tandem bike. It looked like fun and we'd both never ridden one before. Stu took the front and I rode at the back. It was a bit scary at first as Stu wanted to ride fast and kept wobbling the bike but once we got used to it, it was good fun. It just felt a bit surreal for me being on a bike but not being able to steer! We enjoyed it though, and stopped every now and then so Stu could take some pictures. It was really smoggy though so not easy to take pictures of things in the distance.

It was a great ride around the city wall, but we were all feeling a bit tired afterwards - the lack of sleep the previous night probably didn't help either.

On the way back to hotel we stopped at the supermarket to stock up on a bit of food and drink and then went back to the hotel. Greg and Nick wanted to watch the Spurs v Gunners football match and found an internet cafe where they could watch it over the web, Louise went to bed, Tyson went to bed early as he wasn't feeling too well, and Tegan and Jo came to our room for a bit to play some cards and iPad games. We just grabbed a sandwich from Starbucks downstairs for dinner as lunch had been so filling that we only needed a light snack. Jo headed to bed fairly early, but Tegan stayed for a few more hands of cards before we called it a night around 10pm.

We're both looking forward to tomorrow as we will be going to see the Terracotta Warriors, and on my birthday too!