No More Woof Or Meow 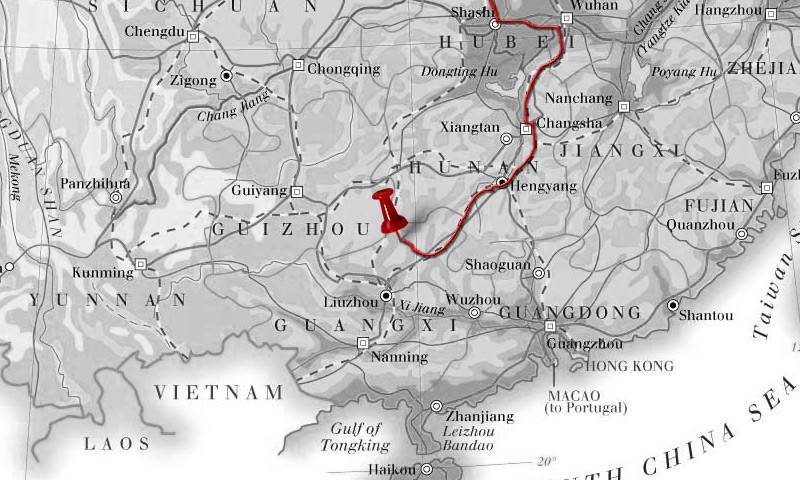 We met our cookery teacher, Linda, in our hotel room at 9:30am. She took us on a brief walk first to meet up with some others who would be in our cookery class. The weather was still wet today, so I think we picked a good day to do an indoor activity.

The other people in our group seem nice. We have three siblings from the US - Ariel, Sarah and Adam. They have been travelling Africa and Asia, and they have been joined in China by their parents Gary and Lyn. There is a guy on his own called Dave who has been living in Shanghai for three months. There were also a group of three others who joined us later, two girls (one from Birmingham UK, the other French) and a guy from Melbourne, Australia - all staying in a local hostel. (I have forgotten their names!)

Our first task was to go to the local food market with Linda to buy some of the food we will need. Linda warned us before we went in that we might find the meat section of the market quite distressing, as they would butcher the animals right in front of you. I don't think anything could have really prepared us though.

The first area of the market we walked through was the vegetable section. All the vegetables looked amazing, really fresh. We could recognise most things, but there were the odd fruits and veggies that looked strange to us. Linda bought some beans and mushrooms, then lead us along to the meat area.

The first thing we saw were the live animals in cages. They had chickens, ducks, rabbits and, most surprisingly, cats! The animals that were alive in the cage would probably be bought by the customer alive, and they would kill them themselves. It wasn't pleasant to see them shut up in tiny cages, none of the animals really had space to move around in them.

Behind the live animals were a series of alcoves where people were butchering the animals. It's nothing like the UK here where you go into Sainsbury's, pick up your pre-prepared chicken breasts and have complete detachment from where it came from. You get to see it all. We watched as one woman was removing the guts from a duck and then chopping it up into small pieces. Then we noticed a skinned and cooked cat hanging up on a spike on the wall. However, the worst was still to be seen. Stu walked a bit further down the meat section to another alcove. In here there were a couple of live dogs being held in very small cages. Next to them was a dog hanging upside down with it's throat cut and blood all over the floor. I didn't see this at the time but Stu showed me the picture afterwards. I'm not normally squeamish but it was really horrible to see the live dog watching the dead dog hanging there. We are so used to seeing dogs kept as pets, so this was very weird to see. A couple of the people in our group from the US said they couldn't look as they have pet dogs back home. (Stu note: as Asia has no laws against the cruelty or protection or animals please imagine the worst. I haven't included the worst pictures on this blog, google 'Chinese Dog Market' images and discover for yourself).

As we continued our walk around the market we saw some dried rats and birds hanging up, there were also various live animals and reptiles being held in tubs of water on the floor - snakes, frogs, fish, turtles, snails. Nothing looking particularly appealing, but it is fascinating.

After having a good look around, Linda lead the way back to her restaurant where we would begin our cookery lesson.

Firstly we sat round the table with Linda and talked a bit about the market. Linda confirmed that some Chinese do indeed eat cat, but that it is not as popular as dog meat here. She said that most restaurants serve dog meat, but it was unlikely that we would be served it without knowing as the dog meat is more expensive than other meat. Linda told us the saying about the Chinese: 'The Chinese eat everything with four legs, except the tables and chairs. They also eat everything that flies except aeroplanes'. Ain't that the truth! She also told us that apparently the term 'dog meat' is used as a term of friendship. So some Chinese might say 'You are my dog meat' which basically means 'You are my friend'.

Linda took us upstairs to the room where we would do our cooking. We each had a section of the bench with our own wok, utensils, ingredients and sauces. We were going to be cooking three dishes each - sizzling beef, spicy chicken and spicy green beans. One of the other groups was doing a tofu dish instead of the beef. I think we chose the right ones.

First we had to chop up the vegetables for each of the dishes. We all just followed Linda's lead, it was all quite straight forward. Then we had to marinate the beef and the chicken. This was done using egg white and later some corn flour.

The spicy green beans was the first dish to cook. This was fairly simple, and the great thing about doing it yourself is that you can add as much or as little chilli as you like. I made sure it wasn't too spicy for me.

Once the green beans were cooked we moved on the beef dish. Again, quite quick and simple. We cooked the beef partially first, removed it and cooked the vegetables, then cooked them all together. Next we heated up and iron skillet, and placed the beef on top when it was searing hot - to create the 'sizzle' for the beef. We could then go downstairs in the restaurant and eat our first two dishes, and they also served us some rice to go with it. While we ate, the other group cooked their tofu dish.

After we'd finished the first part of our lunch - which was delicious, if I do say so myself - we headed back up to the cookery room to cook our last dish of spicy chicken. Once again, everything was fairly simple to follow, and we could add our own measure of spice. Once this was finished we could head back down and finish off the rest of our lunch.

There was so much food, so there was no danger of going hungry. The cookery lesson plus all the food only cost is £12 each, which I think is really good value. I'm glad we opted to do this.

After we'd finished our food, we said goodbye to the cookery group and headed back to our hotel. We had paid an extension charge on our hotel room so we could keep the room all day. It saved having to check out before we left for our cookery lesson , and also meant that we could chill out in our room for the rest of the afternoon and use the Internet if we needed to.

I started to get a bit of a headache so had a couple of hours sleep to try and get rid of it, while Stu could sort out some of his photos.

We met up with the others at 6:30pm in the lobby, and we had a bus come and pick us up from the hotel. This was taking us to the train station, from where we would get our overnight train to Shenzhen (the border city from where we get into Hong Kong). The bus was already nearly full up with Chinese passengers, so most of us couldn't sit together. It also stopped a few times along the way to pick some more passengers. There were no seats left so the conductor got out some plastic stools and put them down the centre isle - they must have been uncomfortable as it took a good ninety minutes to get to the train station. (Stu note: Ricky had actually phoned up the bus company to have a public bus service re-route itself past our hotel!).

It wasn't too much of a long wait at the station to get our train. The train itself also looked a lot newer than the other trains we had been on, so it seemed a lot cleaner too and less noisy.

Stu put on Iron Man 2 from his laptop and we all sat around on the bottom bunks to watch it. I laid on the middle bunk to watch it though so everyone could fit in, but I didn't stay until the end of the film as my headache still hadn't shifted and I needed to go to bed.