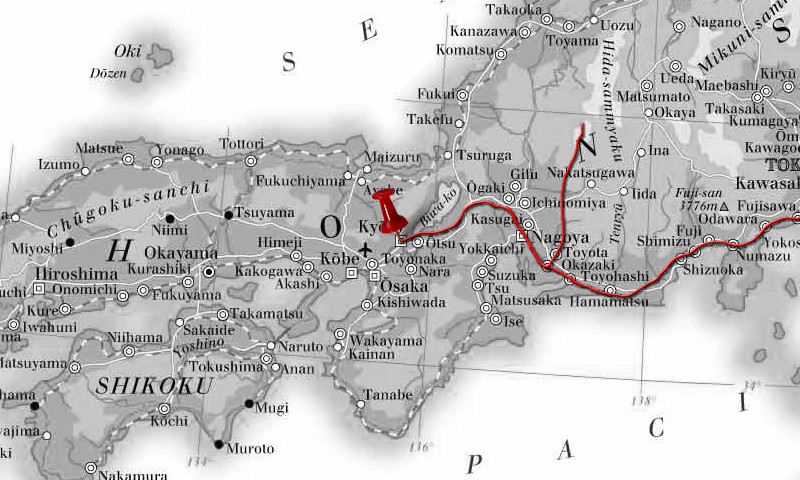 We both slept really well last night. The beds in this hotel were very comfortable and warm.

Breakfast was at 7:30am sharp, and for the first time we were served traditional Japanese breakfast. It was particular to this region as it contained the speciality Hida beef. This was presented raw and covered with a tasty miso paste. The meat was placed on top of a leaf and held above a small flame. The idea being that it was cooked by the flame to your taste. Also on our breakfast platter was tofu, rice, cold soba noodles, miso soup, cooked fish on a stick and a couple of small pieces of cooked egg all served with some hot green tea. The cooked egg was for our benefit, as traditionally the Japanese would have eaten it raw. I think that might have been a step too far for us!

To follow this we were served with dish which contained steamed egg. Whilst this doesn't sound too bad, it tasted raw - Stu ate all of his! I ate some but couldn't stomach the rest. It was all washed down with a steaming cup of coffee. Despite some of the descriptions given, the breakfast was quite nice. I was concerned about not liking it, but for the most part it was quite tasty. The beef was certainly delicious and whilst I do like miso soup, I found it a bit hard going for breakfast. But you never know, I might get used to it!

After breakfast I headed to the bathroom to shower. In this hotel they have separate male and female bathrooms, and they each contain showers and a huge bath. First you enter the changing room where you get undressed, and then you enter the steamy bathing room. It has some showers around the outside of the room (designed for use by many people at a time, but you can lock the door so you can have it all to yourself - which I did). In the centre of the room is a huge hot bath, about the size of a large king size bed. The idea is to shower first, have a dip in the hot bath, then clean yourself again in the shower. A great start to the morning I have to say.

We were considering staying another night at the same hotel, but the lady there informed us that the hotel was fully booked the following night. She also said that most other hotels will probably be booked too, as there was a week-long festival coming up and there would be many people flocking to Takayama. This was a bit of a shame, but luckily the lady was happy for us to leave our bags at the hotel for the day while we did some more sightseeing. We decided to book a train to Kyoto later in the afternoon and get a hotel there for the night.

After popping to the train station to book our train reservations, we took a walk towards the morning markets. There was lots of fruit and vegetables for sale as well as other gifts and trinkets. Some amazing apples - about twice the size of ones back home. We felt compelled to buy some.

Next we took a walk along the signposted trail of temples and shrines in the town. There were many to see, each one very beautiful. It's amazing that the wooden structures are so old; they look like they could have been built this century! The walk we took was well signposted; you pass a map every other street corner, so there is no danger of getting lost.

We took a walk into the wooded park area of the town. This took us some steep trails among the trees, but we were well rewarded with great views over the town, and some amazing views of snow-capped mountains in the distance. It was very much worth the effort.

The Japanese certainly have a thing about vending machines. You can barely walk down any road without passing at least one vending machine of some sort - either containing drinks or cigarettes. Imagine if they sold cigarettes in vending machines on the street in the UK! What I love about the drinks vending machines is that you can get both hot and cold drinks in a can. I bought a cafe latte today, nice and warm.

After a long walk around the sights we decided to grab some lunch. We had ended up in the same area as where we had noodles yesterday, so it made sense to go there again as it was so nice last time. I decided to try the soba noodles with grated Yam, while Stu went for the Udon noodles with chicken and Welsh onion (i.e. leek). They must have recognised us from yesterday as they brought over a complimentary dish of mountain vegetables - very nice. We had the same seated positions in the restaurant giving us views of the steam-filled kitchen and nattering cooks!

It was now time to head back to the hotel, pick up our bags and then get to station for our train. First we headed back to Nagoya, from here we got the Shinkansen onto Kyoto.

Upon arrival in Kyoto we grabbed a cab to the hotel - we were feeling quite tired after a long days walking and train travel. We knew we had splashed out a little more on this hotel - the Hyatt Regency in Kyoto - but I don't think we realised how nice it was. We had booked a standard room, but they had upgraded us to a deluxe room (I presume they had an overbooking) which meant waiting a few minutes for our room. This wasn't a problem as it gave us time to check out the hotel bar.

Once our room became ready a porter came long to show us to our room. He was really nice and helpful and brought us up some menus for the restaurants so we could make a choice about what to eat.

The room is amazing. It is really spacious, has the most huge and comfortable bed. It has a big wet room and bath, minibar, widescreen TV (with English language channels) and space-age toilet.

It was whilst unpacking in the room that Stu realised he still had the room key from our hotel in Takayama! Luckily, the porter said he would deal with it. He phoned the hotel for us (as he could converse with them in Japanese) and explained that we would post them the key. It was quite funny watching him on the telephone as he was continually bowing and showing respect even though he wasn't visible to the other party! He told us they were very happy that we had it and would be sending it on. Then the porter popped it in an envelope for us and said he would post it off - problem solved!

They have three restaurants in the hotel - A Grill, and Italian and Japanese. After a recommendation from the porter and a quick look at the menus from all of them we decided to go for the Italian. I have to say that the Japanese do Italian food pretty well. Stu had a calzone pizza and I had gnocci. Both were excellent. We ordered tiramisu for dessert which I'm afraid to say wasn't quite so authentic, but still very nice.

I think we are going to be enjoying staying at the Hyatt, but it's only for a couple of nights so we will have to make the most of it!