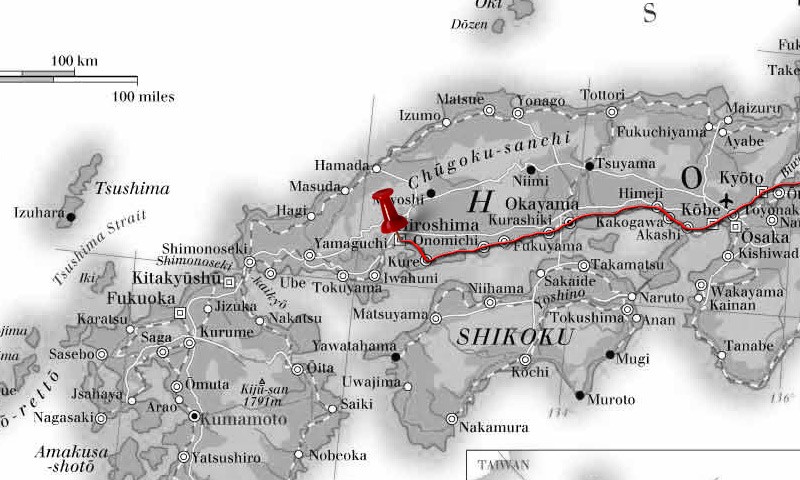 This morning after breakfast we checked out of the Ana Hotel and took the free shuttle bus to Kyoto station. From here we could catch the Shinkansen (bullet train) to Hiroshima. We hadn't reserved our seats for this journey today, but they always set aside a few train carriages for unreserved passengers. The train wasn't too busy so we managed to get two seats together. The train journey was only around ninety minutes, although we struggled to keep our eyes open as we both were feeling tired.

On arrival at Hiroshima we walked to our hotel, only five minutes away. It's located near the station, so we can hear the trains, but it's not very noisy and shouldn't present too much of an issue.

At the hotel we were advised that check-in wasn't until 4pm! It seems ridiculously late for check-in, but we did get a good rate for our room on Expedia so we can't complain too much. They kept hold of our luggage for us, so no great problem.

The first thing we saw after arriving at the Peace Memorial Park was the Atom Bomb Dome. On August 6th 1945, this building was severely damaged by the first atomic bomb ever used in warfare and has been kept as a lasting symbol to convey the horror and destruction caused by nuclear weapons. In 1996 this dome was registered as a World Heritage Site, and despite the vast reconstruction of the rest of the city of Hiroshima, it seems fitting that this building be kept as a reminder of this destructive event.

After walking further into the park and across the bridge we came to the central area of the park and saw the Peace Pond, which has the Flame of Peace at one end and the Cenotaph for the A Bomb Victims at the other. It was around this area that a group of school children came over to us. They were obviously all on a school excursion and needed to go up to 'foreign looking' people and ask them questions. They wanted to know where were were from, what we thought of Japan, what our favourite Japanese food was etc. It seemed a good exercise for them to practice their English. After answering a few questions for them they gave us each some origami gifts which they had made, mainly in the form of Cranes (a symbol of peace). Whilst this was nice the first time, we continued to get asked by more and more school children (the same questions) so it got a bit tiring after the fourth or fifth time. We decided that this might be a good time to dart into the Hiroshima Peace Memorial Museum and make our escape from them!

The entry fee was an extremely cheap 50 yen each. It was a great museum with lots of interesting and sometimes quite graphic exhibits. It was very busy; it seemed as though all the children in Japan had come for a day trip! It had exhibits which included people's clothes after the blast, steps where someone had been sitting with a dark shadow where they had been vaporised. There were also bottles, roof tiles and lunch boxes which had been melted out of shape, as temperatures at the hypocentre of the blast reached 4000 degrees celsius! They also showed photos of the city before the blast and how it looked afterwards. It was unbelievable how everything was completely wiped away, barely anything left standing at all. It showed where the blast actually occurred, which was 600 metres above the ground - I hadn't realised they explode the atomic bomb above the ground (Stu note: this is done to ensure a maximum kill radius). We read the stories about how, just after the blast, people who were severely burnt but still alive threw themselves into the water to escape the burning - they soon began to find masses of dead bodies floating down the river. It all sounded totally heartbreaking. It seems an important lesson needs to be learnt here (Stu note: don't aggravate a nation capable of weaponising nuclear energy by annihilating a substantial portion of their navy in a surprise attack. I'm kidding, but let's not forget that all who participate in war conduct acts of atrocity).

After going through the museum we realised that we'd totally missed lunch, so grabbed a quick snack at a local cafe. Then we took a walk up to Hiroshima Castle.

This castle was built in 1531 but of course was destroyed by the atomic bomb explosion in 1945, and so it was rebuilt in 1958. It was free to walk through the castle and grounds, but there was a charge to walk up the castle tower. On each floor of the tower they had various exhibits on display, although the main draw about coming up the tower was the view from the top.

After leaving the castle we took the streetcar back to Hiroshima Station and wandered back to our hotel where we could finally check in to our room. To say the room was small was a bit of an understatement! But it was still nice and comfy and all we really needed for one night. We could hear the odd train in the station but the noise didn't bother us as it wasn't too loud. Hey, the room was cheap so we can't really complain!

We decided to eat out tonight, as we'd seen a few places to eat along the walk from our hotel to the station. We found a reasonable place to grab a beer and some food. It was really good, it made a change from eating food from the mart on an evening!

We've decided to visit a place called Miyajima tomorrow which is under an hour away from Hiroshima. We decided that the best option would be to book another night at the same hotel (as hotels in Miyajima are expensive and few and far between). I went onto Expedia to book the same hotel, but it was only when we informed the staff at the hotel of our booking did we realise that I had in fact booked their sister hotel, not this one! It seems that they have another hotel with almost exactly the same name, but somewhere else! Fortunately for us though, this hotel is just a few minutes walk away from our present hotel, so no huge catastrophe. It's a shame because we were looking forward to leaving our bags where they were!