Hoi An, My Son

At Least We Have Lunch To Look Forward To! 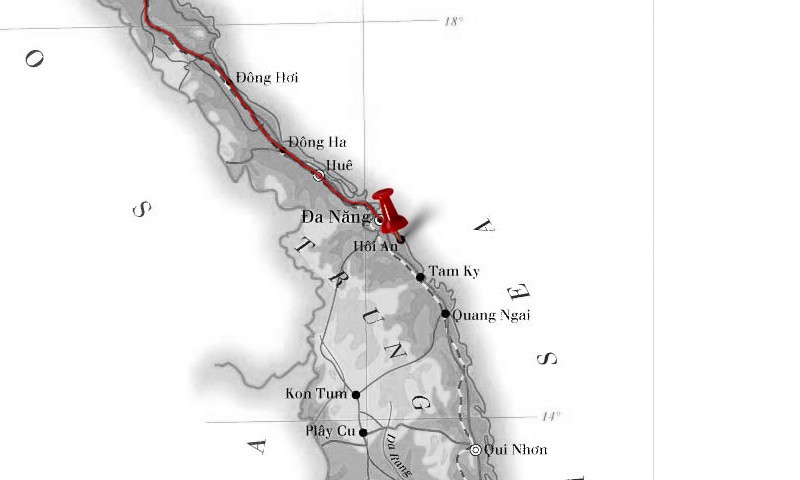 We took breakfast early in the hotel today as we had to meet the rest of the group at 8am to get our bus to My Son (pronounced 'me sun'), the most important remains of the ancient kingdom of Champa (an ethnic minority in Vietnam) and a Unesco World Heritage site. Whilst there are other Cham sites in Vietnam which are better preserved, none are as extensive and few have such beautiful surroundings.

My Son used to be the most important intellectual and religious centre many centuries ago. It may also have served as a burial place for Cham monarchs. American bombs have reduced many of the towers to ruins, but there's still plenty to see here.

Our bus made a couple of stops before arriving at the site, to pick up some other tourists. It was a really hot day today, and once we arrived at the site it seemed that the humidity soared.

As well as having Thanh, our group guide, we also had another guide to tell us about My Son and lead us around. Our new tour guide seemed very nice, but unfortunately his English pronunciation was not as good as Thanh's, and it was quite a struggle to understand what he was saying most of the time. He often repeated words and phrases in an effort to ensure we understood, but it just meant that we heard something we didn't understand again and again!

Our guide led us around the towers when we arrived. There are towers located at a number of different sites, but he showed us around the main site which was the best preserved. We would be allowed our own time to explore the others if we wished to.

Our guide showed us around and even inside some of the towers. One of which offered a nice, but very brief, relief from the stifling humidity. The towers themselves only let light in one way, through the front door, so are extremely dark inside - but cool. The brickwork of the towers is quite interesting as they are laid extremely tight together but are not held together by any mortar. You can see where the original bricks lay and where newer bricks had been fitted slightly later as the newer bricks have moss growing between them, whereas the old bricks are so tightly fitted that they do not. Researchers are still not entirely sure how the Champa managed to get the bricks fitted so tightly together.

Our tour guide seemed to talk incomprehensibly for what seemed like ages, and then we were given time to explore by ourselves. We headed over to some of the other sites, but there was a lot less to see here due to the damage they had suffered.

After having a good look around, we headed back to the entrance, where there was a performance of Champa music and dance. Then we all met up again and returned to our bus for our journey back to the hotel.

Instead of taking the bus all the way back to the hotel though, we would be going part of the way by boat. This sounded like a more scenic option and we would also be provided with lunch on the boat too - great, as were all really hungry.

The boat trip was slightly disappointing. Whilst it was a comfortable ride, and the breeze provided by the movement of the boat was great, there was very little to see along the way. Either side of the river there was little going on. However, the big disappointment was lunch. The lady on the boat started to pass round plates of rice to everyone, which I assumed would be the accompaniment to something else - but it wasn't. The small plate of rice was our lunch - a bit of a let down.

The boat made a brief stop at a small village, apparently famous for it's production of wood products. There were shops containing some great wooden carvings, and you could even watch as some were being made. There were also some boat builders by the side of the river.

Back on the boat we headed back to central Hoi An, and then a bus was waiting to take us back to the hotel.

We both felt quite tired on getting back, and used the few hours we had as free time to relax. Stu had a bit of a sleep, while I wrote up the blog.

Tonight we were meeting Tegan and Tyson for dinner. We headed out a bit early at 6pm and wandered down to the river footbridge, where we would meet them later on. Stu wanted to get some night shots using his tripod beforehand.

As we were hanging around, I spotted Pat sitting down and wandered over to have a chat. Apparently the rest of our group had also arranged to meet at the footbridge for their dinner too. They were heading to a place called Mango Mango (recommended in the Lonely Planet guide). We told them we would meet them after our dinner with Tegan and Tyson.

At 7pm we found our Canadian friends coming over the footbridge and headed to a restaurant nearby. It was great to see them and catch up on their trip in Vietnam.

Our dinner was ok. I had a set menu for 79,000 dong (about £2.50) which consisted of white rose (tapioca dumplings), spring rolls, cau lao (noodles with meat) and saut�ed squid - quite nice. Stu and Tyson decided on a break from Vietnamese food and opted for pizza. However, Stu made the mistake of asking for extra chilli on his pizza. When he tried it he said it was the hottest chilli he had ever eaten. Then I watched something I had never witnessed before - Stu taking chilli OFF the pizza!

After a great meal and catch up, we wandered over to find the rest of our group. We introduced Tegan and Tyson to everyone and after waiting for everyone we headed to a bar.

We found a place which seemed nice enough. It played some good music and had some interesting modern art on the walls.

People gradually started to trail off and go home after the first round of drinks, but Stu, Michelle, Tegan, Tyson, Monique and I managed to last until gone midnight - although I only had a couple of beers and was drinking water most of the time. Monique was having fun making friends with another group of Aussies. One guy - who called himself Muff - invited her to a naked beach party! He came over and introduced himself to us, and we realised immediately what a complete idiot he was, so we soon decided to call it a night and make a swift exit.

When we got outside it was raining slightly, which actually meant it was lovely and cool. Tegan and Tyson soon went their separate way back to their hotel and we wished them farewell. Hopefully we'll bump into them again before we leave Vietnam - but if not we shall probably say hello as we go through Canada at some stage.