Swimming In The South China Sea 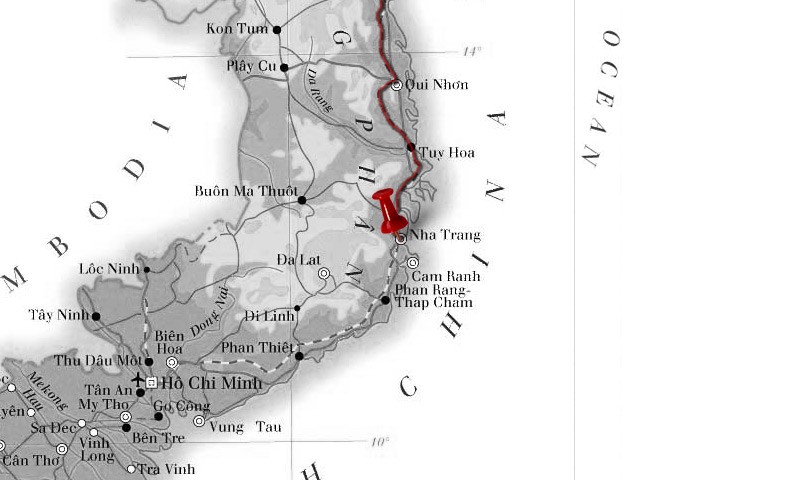 We had breakfast in the hotel first thing which was quite nice, and then got a bus from outside the hotel at 9am as we were having a boat trip today - although Stu was a few minutes late as he decided to have a last minute shave before leaving the room!

The bus took us to where we would be catching our boat. Nearby there were some ladies selling various bit and pieces, and a few in our group decided to buy some bits for the trip - including Stu who bought himself a rubber ring, as we would have the chance to do some swimming off the boat later.

Our boat was fairly small, not as big as our boat on Halong Bay, although it didn't need to be too big as we would only be on it for a few hours. It had a seated area on the main deck, and a smaller area up top where you could sit in the sun. We had the boat just for our group too, which was nice.

Thanh said we were lucky with the weather today as it was really hot and sunny. He said that the last tour group he had brought here had rain for the whole boat trip - what a disappointment that would have been.

We had another tour guide for our boat trip. His name was Mr Lam, and he said we could call him 'lam chop' if we liked! He was really informative, and could speak great English so we could understand him easily.

Our first stop on our boat trip was over to Mieu Island. This was a much more interesting place than Nha Trang itself, as we got to see local people cooking food on the street, and a lot of the local children as we walked past the school on the island. Most of is tried a small waffle that a lady was making on the street. It was made with egg, flour, milk and coconut - very tasty, and only 3000 dong (about 10p).

We walked right through the island, over to the side where all the fishing boats were kept. Our guide also told us about the cock fighting that goes on. Apparently it is illegal, but the people on the island know that the police are far enough away in Nha Trang to not be a threat. Every now and then as we walked around, we did see quite a few cockerels in cages which were obviously just hanging around until fight time. It wasn't nice seeing them in small cages.

We headed back to our boat after a good look around, and we headed to an area near the coast where the boat stopped and they allowed us to jump off the boat and do some swimming. The water was a lovely temperature, and we could jump off both the bottom and top decks of the boat into the water. They even had some snorkel masks we could use.

Snorkelling was great fun. We saw lots of different types of fish, and a few colourful tropical looking ones. We also saw some starfish, a sea snake (kept my distance from that one, even though it did look pretty dead!), coral and even some sea urchins. It wasn't as colourful as somewhere like the Great Barrier Reef, but still good.

Soon we were back on the boat as lunch was about to be served. Another boat pulled up along side us where our lunch was being provided from, and it was a really good spread. We had squid, beef, chicken, noodle salad, rice, spring rolls and green beans. There was loads of food and it was really tasty.

After lunch the boat headed to a beach where we could get off the boat and sit on some deck chairs, fortunately provided with some shade by some big parasols. It was nice to relax for a while, and seemed the perfect time to enjoy an ice cream. There were a couple of women on our trip to provide pedicures and a few of the woman in our group indulged, though there is nothing I could think that I needed any less at the moment!

There was the opportunity to do parascending along the beach, but I had done it before some years ago and was very happy to stay in my deckchair. Andy and Louann from our group decided to give it a go though, which provided some entertainment.

Whilst the weather had started out very hot and sunny, the weather gradually began to turn more cloudy and windy as the day went on - although it still didn't feel cold. Thankfully, we returned to the boat around the time the weather had turned, and we headed back to Nha Trang. A bus was waiting for us to take us back to our hotel for about 4pm.

We had a couple of hours or so before we had to meet everyone for dinner. We walked to a nearby restaurant which was very nice. Some of the group decided to stay out for a couple of drinks, but Stu and I were feeling quite tired and headed straight back to the hotel to go to bed. Just when I got into our room I received a text from Jo - the girl from Bristol who was in our tour group in China. She had met up with Tegan and Tyson in Nha Trang and they were heading out for drinks. It was a shame we felt so tired as I would have loved to have met up with them. Hopefully they will still be around tomorrow and we might get the chance to see them then.