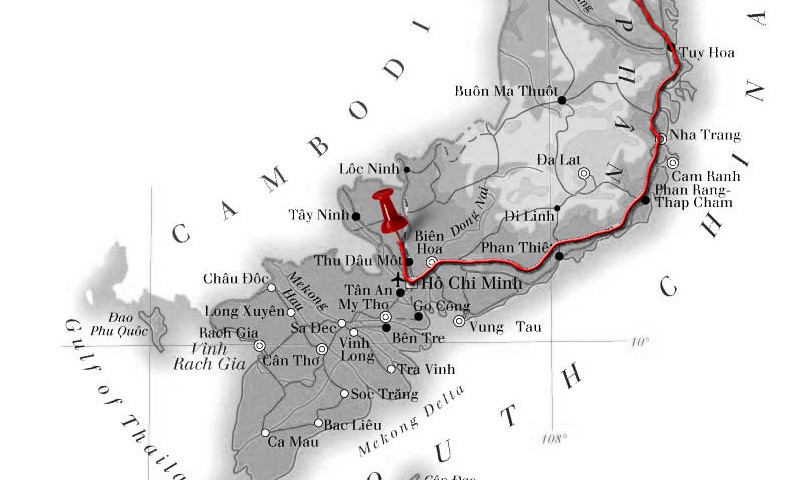 I didn't get very much sleep on the train overnight. I'm not sure why as it wasn't too uncomfortable. I think it was a similar story for everyone else.

Unfortunately, our arrival time in Ho Cho Minh City (perviously known as Saigon) was 5:30am! So no lay-ins for us this morning.

There was a bus waiting for is in the station when we arrived to take us to our new hotel. Due to the early arrival we were not yet able to check into our own rooms. However, a couple of day rooms had been booked for us to share, so we could dump our luggage, get a shower etc. Whilst the hotel is really nice, these seem to be the smallest hotel rooms we've had so far, so a bit of a squeeze to fit six people in plus their luggage, and for each of us to shower too! After a night on the train though, you always need a shower afterwards.

Breakfast in the hotel was not included in the price this morning, as we hadn't spent the night at the hotel. Some of the group decided to head outside to get breakfast. If I wasn't feeling so tired I may have done the same, but it was a lot easier to just eat in the hotel and pay the 100,000 dong (�3.30) for the breakfast - expensive for Vietnam. We all had a bit of a giggle as we watched Michelle pour what she thought was hollandaise sauce onto her bacon - not realising it was actually condensed milk! This is not the first time she has made such an error. The other day I also watched as she sprinkled sugar on her scrambled eggs!

At 8am we met the rest of the group in the lobby and got our bus to take us to the Cu Chi Tunnels - about a 1.5 hour drive away. The Cu Chi Tunnels are an immense network of connecting underground tunnels and part of a much larger network of tunnels that underlie much of the country. They were the location of several military campaigns during the Vietnam War, and were the Viet Cong's base of operations for the T?t Offensive in 1968. Incredibly, these tunnels were used by Viet Cong guerrillas as hiding spots during combat, as well as serving as communication and supply routes, hospitals, food and weapon caches and living quarters for numerous guerrilla fighters.

When we first arrived at the tunnels we were seated and watch a short documentary film about the tunnels, and their importance during the war. Then we had the chance to walk around and see various sections of the tunnels, and also traps that were made in the ground to capture the enemy. Some of the them were extremely clever, and many designed to inflict a lot of suffering.

We made a brief stop as we walked along, to have some tea and be able to try some tapioca - it tasted like a cross between a potato and a parsnip, really good dipped in some salt, crushed peanuts and pepper.

We carried on walking and the sections of the tunnels that we saw were incredible. They had widened a few sections of the tunnels specifically to enable tourists to get through. I couldn't believe the tunnels had actually been made wider, as they felt very cramped even now. You could walk through up to three sections, but I found one section was quite enough and made my way to the surface after that. Andy was the brave one amongst us who made it right through to the end.

It is quite incredible to think how people would have spend so much time inside these thin tunnels. It goes to show what sheer survival instincts these people had and how much they could tolerate, as they would often have to spend days in the tunnel to avoid detection.

The tunnels are so cleverly designed, and work so well as the Americans found them difficult to find and hard to force people out of them. The role of the tunnel systems can not be underestimated in its importance to the Viet Cong in resisting American operations and protracting the war, eventually culminating in an American withdrawal.

Once we had walked past all the tunnel openings and traps, there was the opportunity to have a go at shooting with an AK47 on a shooting range. Only Andy decided to have a go. As we waited for him we watched as a woman who was making circular rice paper in a hut nearby, and drying them out in the sun.

After we had seen it all we headed back to our bus to return us to the city. Thanh said we would be stopping at a noodle restaurant that President Clinton once visited called Pho 2000, not too far from our hotel.

The restaurant had really speedy service, and the beef noodle soup was great. A great idea to stop here.

After we had all eaten we were due to be picked up by cyclo outside for our tour of the city. A cyclo is a means of public transport with a three wheeled bicycle at the back ridden by the driver, and a seat at the front for the passenger. It is quite a nice and lazy way (for the passenger) to get around. We all had a cyclo each and it was interesting to say the least, weaving in and out of all the crazy Saigon traffic.

Our first stop on the tour was at the War Remnants Museum. This is a fascinating, if graphic, illustration of the Vietnam war, containing incredible photographs, stories, artefacts etc. It focuses on what happened during the war and the after effects. A really interesting place which taught me a lot - a must-see for anyone paying a visit to Ho Chi Minh City.

We got back on the cyclo outside the museum and moved along the streets a bit further, going past the city hall, the opera house and other points of interest. I took a few movies with our little camera, trying to capture some of the crazy traffic.

Our next stop was at the massive Post Office and Notre Dam Cathedral, both built by the French in the 1800s and both which have managed to survive the bombings during the war. Very impressive buildings, and worthy of a few pictures. The post office also had an HSBC ATM inside, which came in very handy for us.

Our cyclos returned us all to the hotel around 4:15pm, and we had a couple of hours rest before we had to meet for dinner. Once we were back at the hotel we could also check into our own rooms, thankfully.

Just before we had to leave our room to meet the others for dinner, we managed to have a brief chat with Stu's brother Russ on Skype, as it is his birthday today. It was nice to see him, Davinia and little Pheonix again for the first time in a couple of months

We met everyone downstairs at 6:30pm, with the intention of finding somewhere to eat near the food markets. Some of the people in our group were determined to eat street food, but most of us were not too fussed whether we ate on the street or in a restaurant, as long as the food was good.

After a bit of walking around and realising that the food markets were only just being set up, we decided to grab a drink in a bar first. We ordered a few beers and soon realised that the prices in Saigon are a lot higher than elsewhere in Vietnam. We didn't want to eat at this bar as their menu didn't look very appealing, and seemed a bit pricey too, so after a drink we headed out onto the street.

It is quite difficult to organise a large group of twelve people, so invariable we managed to lose people along the way, and ended up walking up and down the same streets trying to work out where everyone wanted to eat. In the end, we just wanted to stop anywhere and found somewhere with some tables and chairs on the food market.

I played it safe and ordered some fried rice and spring rolls, but I think some of the others found the food there a bit naff. Also, the service wasn't great as they brought us the wrong dish at one stage, and tried to overcharge Natalie. Oh well, at least we gave the street food a go.

Most of the group decided to go straight back to the hotel after food, but Stu, Michelle, Natalie, Andy and I decided to go for a drink in a bar round the corner from our hotel. It seemed like a nice enough place. They had a few people up on the stage singing some songs, which was ok. A lot of Celine Dion and Mariah Carey though! Unfortunately, when we decided to get the bill for our one round of beers we realised we had been a bit stung. We had seen two prices for the beers on the menu, and assumed that the smaller price was for a small beer - which we had all ordered. However, the lower price on the menu turned out to be the daytime price. We had been charged the night time price, which was twice the daytime price, and was closer to the price you would pay in the UK! Oh well, a lesson learned there. We decided to call it a night and headed back to the hotel.