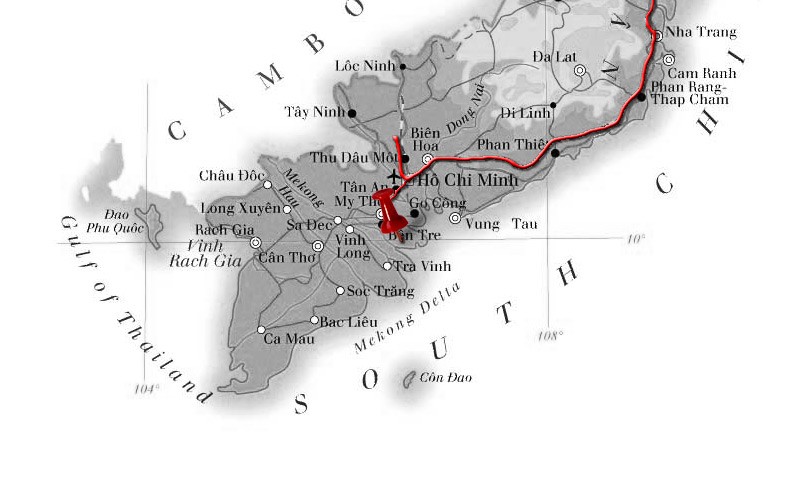 We had our breakfast included at the hotel this morning, and then met the others downstairs in the lobby for 8am. We would be getting a bus to take us to the start of our boat trip along the Mekong Delta. This journey took around 2.5 hours on the bus, with one brief stop-off, so some of us took this as a good opportunity for a bit of a kip.

Upon arrival onto our boat we were introduced to our guide for the day. She was a really friendly, and more importantly a great English speaking guide, who gave us all a bit of information along the way.

Our boat was very nice, with some deck chair styled seats to make our journey nice and relaxing along the river.

We made our first stop at Coconut Island - I'm sure you can have a guess at the reason for the name. Yes, they have lots of coconut trees and basically use all parts of the coconut for various different uses. The first thing we saw was the local people making some coconut candy. Apparently they use the coconut oil and add it to a caramel mixture to make a soft toffee, then they roll it out and cut it into separate sweets which are then wrapped in rice paper, wrapped in normal paper then packaged up. We got to try the freshly made candy which was still warm and only just been made. It was delicious, and we all immediately headed over to the counter to purchase some. It came in various flavours: plain, chocolate, peanut, ginger, and one type which contained some sort of green leaf. We bought up a few packets here. They did have some banana sweets too, but they weren't as nice.

Next we had the opportunity to hold a Python that was kept in a basket nearby. I was happy to let other people do it. Fran, Natalie and Monique were all feeling brave and gave it a go.

Next we all piled onto some motorbike driven carts which took us through the streets and to another area of the island. Here we could see a bee hive and even had the chance to poke our finger through the bees to taste the fresh honey. It felt a bit strange as you could feel the bees buzzing around your finger, but nobody got stung and the honey tasted delicious.

Around here we also had the opportunity to see some of the many items made using the coconut tree. The wood had a very interesting grain, but we don't really have the room in our rucksacks to buy anything from here. They had some nice looking kitchen utensils and jewellery boxes though.

We were taken somewhere where we could sit and enjoy some refreshing fruit. The fruit was served with a dry dip of chilli and salt, which sounds a bit strange but apparently the Vietnamese often dip fruit into the chilli to ease digestion - it's supposed to stop you getting wind! It actually tasted quite nice too.

We got back onto the motorbike driven carts which took us to another stop on the island where we could have lunch. The main dish for lunch was a local speciality of fried elephant ear fish, which was really tasty. We also had some spring rolls, some type of banana fritter, soup, rice and shrimp - it was really nice.

After lunch we got into some small rowing boats which fit about three of us each, and got rowed from a small inlet of the river out to where we could get back on our main boat once again. We got the opportunity to wear a conical hat along the way, the hats we have often seen woman wearing throughout Vietnam. I'm sure we looked pretty daft though.

Back on the boat, we began to head back to the part of the river we had joined from, to get our bus. Our guide offered us a complementary coconut as a complementary drink. You literally dunk in a straw and drink it up. It was very refreshing. After finishing the drink I think most of us fell asleep on the trip back to the shore.

Once back on the bus we took the long journey back to Ho Chi Minh City (Saigon). Most of our group managed some sleep on the way back. I did try but the journey was too bumpy for me to get any sleep, so I just enjoyed the view along the way and listened to my iPod.

We got back to the hotel around 4:30pm and had a couple of hours to ourselves before we had to meet for dinner for our last group meal of our Vietnam tour!

Unfortunately Fran decided not to come along for our final meal, and instead had a wander to the markets and got some food out there. It was a bit of a shame, as it would have been nice to have everyone there for the last meal. Michelle and Louann did come along, although they were a little late. They are both going onto a tour of Cambodia straight after the Vietnam trip, so they had to have a meeting with their new group before meeting us for dinner.

We had discussed where we wanted to go for our final meal, and Andy and Michelle had come across what sounded to be a great place recommended in the Lonely Planet guide. They told Thanh about it and assumed he would book it for us. However, when we were heading out for dinner it became apparent that Thanh had booked somewhere completely different! Bit of a shame, but never mind.

He had told us that the place he had booked meant we would have a dining room to ourselves, but another disappointment in that we didn't have our own room at all. Plus, another tour group was also in the dining area which meant it was quite loud.

Despite this, the food was quite nice in the restaurant. Thanh recommended a couple of speciality dishes, which Stu and I opted for. I had the beef cooked in bamboo - very nice, and Stu went for the coconut beef which he said was nice too.

Michelle and Louann managed to turn up just in time to get their food order in too.

The service in the restaurant wasn't the best - poor Pat didn't get her main course until most of us had nearly finished ours! We spotted Thanh having a chat with one of the guys who worked at the restaurant, and it seemed that maybe we had come here because they were friends of his.

Louann had ordered the same dish as me, the beef cooked in bamboo, but I had ordered rice with mine. Just as our food arrived Louann decided that she wanted some rice too, and mentioned this to the waiter. Seconds later, as my rice arrived at the table, Louann took my rice as her own! I said to her twice that this rice was actually for me, as she had literally only just ordered it, but she appeared to pretend to not be able to hear me (despite sitting opposite me on the table!) Thankfully the waiter came along with some more dishes of rice so problem resolved.

After a fairly pleasant meal, we all headed back to the hotel, where we met back up with Fran. Thanh rounded us all up in the lobby to have a chat with us. He just wanted to say thanks to us for being a nice group, hope we enjoyed ourselves etc. I think we were all in agreement that Thanh was a good tour guide, and he certainly knew his stuff. I think we found that sometimes he could be difficult to talk to, particularly at meal times when he seemed to clam up a bit. But on the whole, he was a good guide to have and he did have a good sense of humour.

After bidding Thanh farewell, and saying goodnight to Pat who was heading straight to bed, the rest of headed round the corner to an ice cream parlour. We all ordered something tasty and sat upstairs to enjoy our ice cream, cakes etc.

Then we decided to head back to the hotel for the night. However, Louann and Michelle were in a different hotel tonight so they can start of with their new group tomorrow to Cambodia. Here we wished them both well and said goodbye. I'm not sure they are too happy with their new group - but then, how could they possibly compete with our group?!

Back at the hotel we also bid farewell to Mia and Monique who will be leaving at 6am tomorrow to get their flight back home. Then we all headed up to our rooms. I decided to pack my bag before going to bed, so I wouldn't have to rush around in the morning. It was no surprise that Stu decided to go straight to bed and leave the packing until tomorrow!