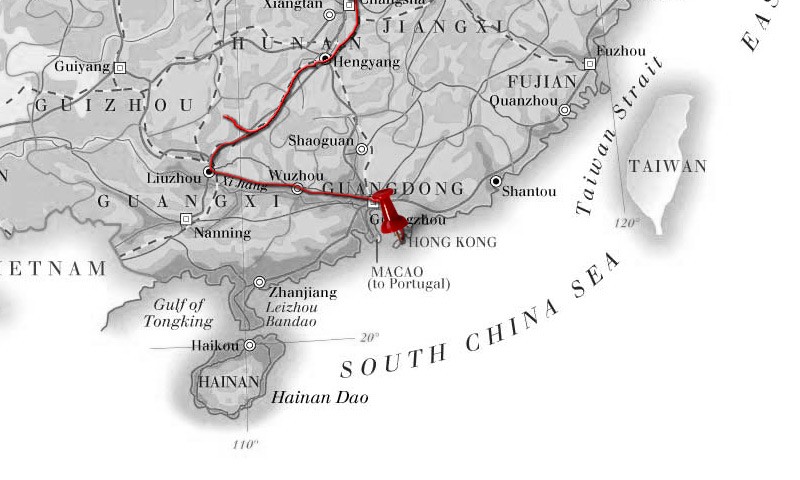 Breakfast was included in the price of our hotel which was handy. It was nice to have cereal again in the morning.

Stu went back to bed after breakfast as he has come down with another cold and wasn't feeling great. We stayed in the hotel room for a couple of hours so he could rest.

We left the room again around 1:15pm and headed for the subway - today we were going over to Lantau Island to see the big bronze Buddha there - apparently the largest in Asia! Lantau Island is bigger than Hong Kong Island, and is actually the largest of all Hong Kong's islands. (Stu note: not more Buddha pictures!).

We got off at the final stop on the subway line at Lantau Island, and proceeded to the cable car terminus to take us to the Buddha area. The cable car was really good. It lasted around twenty minutes and takes you over the big hills with a great view back over towards Hong Kong. You could pay extra and get one of the Crystal Cabin cable cars, but Louise, Greg and Nick had done this the previous day and told us that it wasn't worth it. They said the glass wasn't perfectly clear - and besides, the best view is going to be out of the side windows, not directly below you. We managed to spot the big Buddha in the distance when we were still ten minutes away from arriving - it looks pretty big!

The first thing to do on arrival was to get some food. They had a wide variety of different cuisine options; European, Indian, middle-eastern, Japanese etc. We opted for Indian and got a couple of chicken biryianis - quite tasty!

We walked through the small market area here and proceeded straight to the steps up to the Buddha. It was quite a few steps to get up there, but a great sight from the top and bottom of the steps.

The Buddha is not old, the sign next to it said it was opened in 1996, but it is still an awesome structure. You are able to walk all the way around it to take pictures from different angles, and there are smaller statues appearing to provide offerings to the Buddha, all around the main statue.

I think Stu's first comment on arriving at the Buddha was "We've come at the wrong time of day!", referring to the fact that the sun was behind the Buddha meaning that photos would not be as good. (Perhaps we should have left the hotel earlier then Stu?) (Stu note: I apologise for being ill).

We grabbed an ice cream and sat down for a minute or too, before descending the steps and heading over to the monastery. This was very pretty and contained some smaller golden statues inside. Stu even managed to capture some monks praying inside.

As we wandered back through the small town towards the cable car we bumped into Tyson and Tegan who were just about to head back too. We managed to share a cable car back to the subway station with them, and then went our separate ways after that. We would be meeting them later with the others for food anyway.

We barely had ten minutes to get ready when we got back to the hotel, before we had to leave again to meet the rest of the group again. Thankfully our meeting place was near the ferry port, so not too far from our hotel. We were probably about 10/15 minutes late meeting everyone - or in Stu's world, we were on time! (Stu note: we were on time).

As an easy option we decided on eating western food tonight, and came across a TGI Fridays. We could even sit outside, although there was no view unfortunately due to the fact the building we were in was surrounded by even taller buildings!

The food was quite average I have to say - not quite up to the standard of a TGIs back in the UK. Or perhaps I just chose the wrong meal(?) The food was quite expensive, and my steak didn't have much flavour to it and wasn't very hot. Stu and Nick ordered fajitas which came out on a semi-warm skillet, not sizzling at all as you would expect.

After food we decided to try and find a jazz bar that Greg had found out about earlier, called Ned Kelly's Last Stand. Unfortunately we didn't actually know where the place was precisely, but we knew it was somewhere around Canton Street (which doesn't exactly narrow it down, as Canton Street is pretty long!)

After twenty minutes or so of walking up and down, seeing the same places, losing Tyson, then finding Tyson, we decided to do the sensible thing and ask someone. Stu thought asking the old lady selling massages was the best person - out of all the people in Hong Kong! Needless to say she couldn't speak English other than the word "massage", and didn't seem the jazz club type! (Stu note: at this point I thought it might provide some amusement).

Greg and Stu popped into a hotel along Canton Road and finally got some directions. We followed the directions but it still all seemed a bit unlikely. Stu wandered up some steps, there was plaster coming off the walls, signs pointing towards massage places and restaurants, and we thought this couldn't possibly be it. However, the steps brought us out into another road and we actually found it, at last! (Stu note: I have the internal compass for jazz).

As we walked into the bar, there was already a live band in full swing so we quickly found a table near the front and ordered some beers. It was a small place but very cosy. Whilst there seemed to be a few locals around there was also a large contingency of westerners around, and Aussies as you might expect.

The band were really good. They had a Geordie singer and trombonist who did all the talking and a few gags in between songs. They had some local guys who made up the rest of the band; one on trumpet, one on clarinet-sax and saxophone, another on keyboard, banjo and guitar, another on bass guitar and also a drummer. It was quite a line up, they were amazing! They did a few classics as well; Mack The Knife, and the Benny Hill theme tune being the ones I can remember and name!

It was a really good night, and the bar was such a great find by Greg - nice one!

Once the band had finished playing we decided to call it a night as we were all catching planes out of Hong Kong tomorrow. Tegan and Tyson would be getting on the same plane as Stu and I to Hanoi, but the rest of the group were going elsewhere. Greg and Louise would be flying to Thailand, and Nick would be going home to the UK. So we bid farewell to Greg, Louise and Nick - it has been such good fun spending our time with you guys, and we hope to see you again sometime soon!

Stu and I headed back to the hotel around 1am after another great night in Hong Kong.