On The Way To Hue 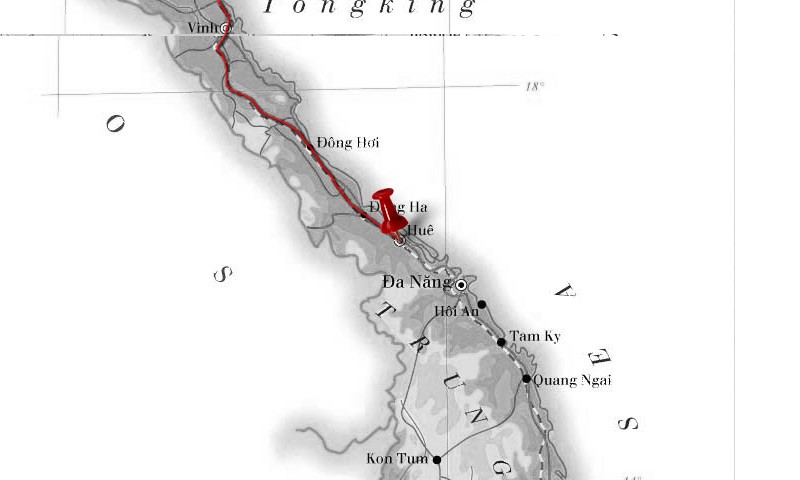 We took breakfast aboard our boat at 7:30am, which consisted of eggs, toast and coffee. The coffee in Vietnam is superb, it is really strong and tasty. Apparently Vietnam is the second biggest exporter of coffee after Brazil. The traditional way to drink it in Vietnam is with a spoonful of condensed milk in the bottom of a cup, pour in the coffee and then stir it together - really good.

The boat began heading back to land once breakfast had started, and afterwards we checked out of our rooms on the boat and had to pay our bar bill from the previous day and night. Ours came to 990,000 dong (around £30 for both of us, which included the cost of my kayaking yesterday). We spent the rest of our time on the boat on the top deck taking advantage of the free time and warm sunshine.

Once off the boat we had a minibus waiting to take us back to Hanoi. But we made a stop first of all at a place which makes and sells pearls. First we were given an introduction about how the pearls are formed. Then we were invited into their shop. There is an obvious emphasis here on getting you to try on the pearls and then buy them. None of us were really interested and just had a walk through the shop. I don't really like contrived situations like this where you feel expected to buy something, so was happy to leave. The best thing about this stop off though was the shop next door selling ice creams - just what was needed!

Once we were back on the bus it was straight back to Hanoi. I was feeling quite tired on the journey and managed some light dozing along the way.

Back at the hotel in Hanoi we had been allocated a couple of rooms for our group to use to store our luggage, have a shower etc. To my dismay I found that my big rucksack had been ripped on the front, straight through to the inside pocket! I was not a happy bunny at all, although some duck tape has covered the hole up for now. At first I suspected that someone had tried to cut into my bag on purpose (as I had locked the zips), but the rip looked fairly jagged, and I assume it must have been brushed past something in the hotel when they moved our luggage. Even so, it was really annoying. However, as Louann suggested, it now looks well travelled already!

Pat, Andy, Natalie, Louann, Stu and I went to Koto to get some lunch. Pat, Andy and Louann hadn't been there before and all really enjoyed it. We also ordered some takeaway food to be delivered later to our hotel, as we will be getting an overnight train to Hue (pronounced as 'hway') tonight and will need something for dinner. That will be much better than a pot noodle!

Once lunch was finished Pat, Andy, Natalie and Louann went over to the Temple of Literature on our advice that it was worth a visit while you are in the area. Stu and I had visited the temple a few days ago, so we headed back to the hotel. Stu took advantage of everyone being out of one of the rooms so he could have a shower. We also packed a few bits into our daypacks for the train, as we remember from China how awkward it is to get anything out of your big backpacks once on board the train.

Our takeaway food order from Koto arrived on time, and the whole group left the hotel with Thanh at 6pm to walk to the station for our overnight train to Hue. Apparently, just as we were walking out of the hotel the receptionist said to Stu "I'm really sorry that you are leaving. Don't forget me!". He had obviously made a good impression there!

It was only a brief ten minute walk to the train station, and we were able to get onto the train straight away. We had sleepers all next to each other. The sleepers are different to the trains in China as each sleeper has just four bunks, and it also has a door which you can lock - superb! This meant that the group took up three sleepers, and Thanh was sharing the next sleeper with some people from another Intrepid tour.

We ended up sharing a sleeper with Andy and Pat - Andy and Stu took the top bunks, so me and Pat were on the bottom. Because there are only four bunks instead of six it means that you can actually sit up on the top bunks too.

When we first got on the train we decided to eat our food first. Then it was time for some cards. Mia, Natalie and Michelle joined us in our sleeper for a while and we had a few games and a couple of beers - it was an enjoyable way to the pass the time.

We decided to call it a night around 10:30pm, so I headed for the toilets for the first time. Surprisingly there is a western toilet on the train as well as a squat toilet, however Isabel did warn us that the squat was a lot cleaner than the western toilet! The toilet I used actually seemed quite clean.

We all got into bed, closed our sleeper door and tried to get some sleep. It was reassuring being able to actually lock the door - particularly for Stu who is always paranoid about the security of his camera. But it is probably more needed on Vietnam trains as Thanh did warn us about people trying to steal luggage on the platform and in the train.

The only issue that I have with this train versus the China overnight trains, is that the sheets don't seem quite as clean. The best option is not to look at them too closely, otherwise you just won't get any sleep. But it is good that there are only four bunks as you don't feel as cramped.