Letting Off A Bit Of Steam 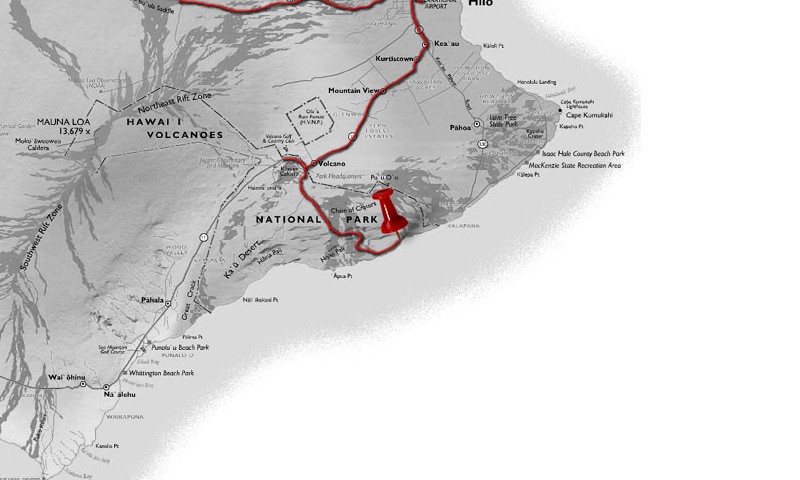 This morning we didn't set any alarms to wake us up as we needed to have a good night's sleep. I awoke this morning feeling totally refreshed after having slept perfectly.

After breakfast I drove the SUV back to the rental garage up the road, while Stu had a shower and also starting looking into helicopter trips.

When I got back we decided to call up about a helicopter trip which looked good - it basically flies you over the volcano, the waterfalls and other areas around Hilo for about 50 minutes. Plus, they have the doors off on the helicopter, which is especially appealing for Stu so he can take better photographs.

We booked our trip for tomorrow morning, and cannot wait!

Meanwhile, our plan for today was to take a drive to Hawaii Volcanoes National Park. Here you are able to drive around the rim of the Kilauea Crater, as well as take a drive down the Chain Of Craters Road which descends down to the coast past many other old lava flows and craters.

Before we went to the National Park however, we took a brief trip to Rainbow Falls and Boiling Pots, which is just about 20 minutes drive out of Hilo. Here we got to see a lovely waterfall, which appeared to drop over the side of a huge cave. Just before the waterfall is an area known as Boiling Pots, as it contains lots of small pools of rapidly flowing water, which almost looks like it could be boiling.

Next we took the drive to the National Park, which is driving south-west from Hilo. The park itself is $10 to enter in a car, and the pass is valid for a whole week - which seems fairly reasonable as there are plenty of things to see and do here.

Once in the park we followed the Crater Rim Drive anticlockwise, and made our first stop at the Steam Vents. When we saw them mentioned on our map of the park I don't think either of us were expecting very much. We had seen lots of these on our trip to Rotorua in New Zealand a couple of years ago, and didn't think these would be as good. We were wrong. We parked up the car, and there were huge steam vents everywhere around us. The most impressive being the ones at Steaming Bluff, coming right over the edge from the huge Kilauea Caldera crater area. It was a lot of steam! In the centre of Kilauea Caldera we could also see the Halema'uma'u Crater in the distance.

Our next stop along the road was at Kilauea Overlook, which gave us a much better view of Kilauea Calder and you could see more closely the amount of steam that was billowing out of the Halema'uma'u crater itself. A fantastic sight.

The last stop along this section of the Crater Rim Road was at the Jagger Museum. No, not Mick, but this was named after the curator of the museum and featured information about volcanoes and eruptions that occurred in recent history.

Outside of the museum was another fantastic view of the crater, and they had even set up a small telescope so you could take an even closer look.

We headed as far as we could down to the Pu'u Pua'i Overlook, which gave is a great view over the Kilauea Iki Crater. There was a walking trail you could follow right down across the base of the crater itself, as we saw some people down there doing it. But this trail was a four mile loop so we didn't think it was worth the bother. Besides, I'm sure the view was a lot better from above!

It was way past lunchtime by this point and we were both feeling really hungry. With nowhere to buy food in the National Park, we took a brief drive out to Volcano Village, just a mile or so back down the road. Here we found a little place serving reasonable priced food. We both opted for chicken teriyaki, which came with rice and salad. Now, my interpretation of the world salad would mean tomatoes, cucumber, salad leaves, maybe onion, carrot etc. Obviously the Americans differ in their interpretation. They mean pasta or potato smothered in mayonnaise! Anyway, the meal was ok but pretty basic, but it served its purpose. Volcano Village itself didn't look especially inviting. The local store had a huge sign outside warning of the dangers of Meths! So after our food we had no reason to hang around and got back into the car, back to the National Park and back on the Crater Rim Road.

We had driven past the Thurston Lava Tube last time, only because the car park seemed full. (Lava tubes are natural conduits through which lava travels beneath the surface of a lava flow). This time there were a few spaces so we made a stop. The walk itself through the lava tube was just a 20 minute roundtrip which seemed fine. I have to say, we both immediately thought about our disappointing trip to the Undara Lava Tubes in Australia, and realised what a much better site this was. Firstly, it only cost us $10 (rather than the $95 AUS the Undara Lava Tubes cost) and it was also not a 200km detour out in the middle of nowhere. And, one of the Undara Lava Tubes was shut too! Here we could walk right through the lava tube from one side to the other.

Beyond the Thurston Lava Tube we couldn't proceed any further along the Crater Rim Road clockwise due to the road closures, so we joined the Chain Of Craters Road from here. This is a road which leads to the south coast from the Kilauea Crater, and is a 36 mile round trip. There are lots of things to stop for along the way. There are masses of old lava flows covering a huge area. It makes for a very strange landscape, but fascinating all the same. There are also a few other craters to stop and have a look at.

Eventually, the road leads you down 3,700 feet to the coast. Here you can clearly see the new land masses created by the lava flow as it extends beyond the mountain. The road itself winds its way down to the coast, and you enter the 'Tsunami Evacuation Zone' (eek!), but it comes to a halt at the bottom as the road is closed and cars cannot proceed any further. Here you have to park up, but you can continue to walk along the road on foot.

You soon realise the reason for the road closure a little way back. After a 15 minute walk past the closure sign the road is blocked by a huge solidified lava flow which had flowed down the mountain, across the road and towards the sea. It looks pretty cool, if a little worrying too. You can walk on top of it, and wedged right in the middle is the old 'Road Closed' sign, which is quite amusing.

Sunset was fast approaching, so we watched as the sun set behind some cloud then got back in the car and made our way back to our hotel.

I think we have been fairly lucky with the weather today - and in fact during our whole time in Hilo so far. Hilo is supposed to rain a hell of a lot, and so far we have only really experienced rain in the evenings. Today was cloudy for the most part, but we saw some sunshine as the afternoon went on which was really nice.

It has been another great day on Hawaii Island.

We check out of our hotel tomorrow and into a new hotel on the West coast of the island. But we have our helicopter ride in the morning first - should be good fun.