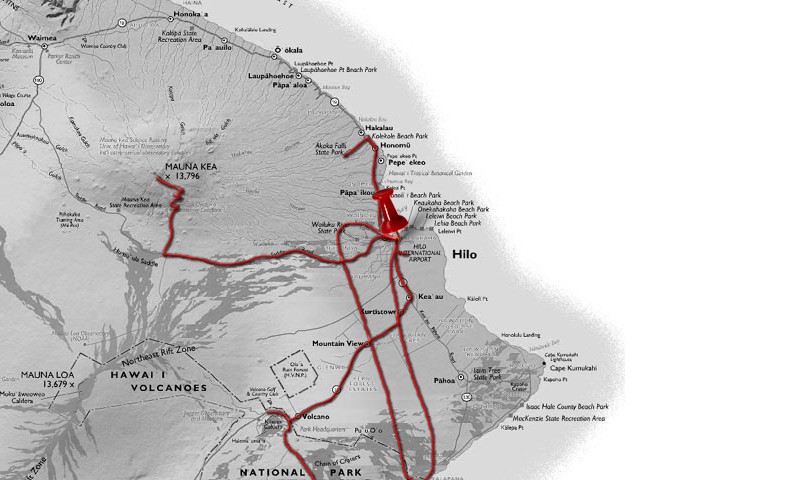 Today was the day of our helicopter trip. We had to get to the airport at 9:45am for our briefing, and then our flight was at 10:30am. Luckily, the trip leaves from Hilo airport, which is just a ten minute drive from our hotel.

Stu was a bit disappointed to learn that he wasn't allowed to take his camera bag on the helicopter, although of course he was allowed to take the camera itself. He wanted to take the bag so he could take his different lenses, so instead he had to strap the lenses to his belt with velcro and lock his back away.

While we waited for our briefing we sat in the waiting area, and also met the other passenger who would be on our trip, a friendly woman from Michigan. The trip we were going on was the 50 minute long 'Doors Off' tour, which would take us over the Kilauea volcano, over waterfalls and other areas of Hilo. Unlike most of the other helicopter trips we saw advertised, this one takes the front and back doors off the helicopter, and it only takes a maximum of four passengers so everyone gets a window seat. Stu especially wanted this tour so he could take better photographs. Our tour just had us three passengers, and the American woman was in the front with the pilot, Stu and I in the back.

After a safety briefing we were taken out to the helicopter, put on our life belt and got inside. We had a headset so we could talk to the pilot if we wished, and hear his commentary during the tour.

Soon we were taking off and ascending up high over Hilo. We found that it got extremely windy up in the air, more than we had expected. When we had done our helicopter tour in central Australia a couple of years ago we had done it with the doors off also, but the helicopter only had doors at the front. Our helicopter today had doors at the back and front which had been removed, so it made for a much more windy experience. It was also quite surreal looking down next to your seat and just seeing the ground getting further and further away.

As we first ascended we headed in pretty much a straight line to go to the Kilauea crater to see if there was much lava flow today. Kilauea is one of the most active volcanoes in the world, and part of the volcano has been continuously erupting since 1983. We had been told there were a couple of flows that were active yesterday, so were fairly hopeful.

We soon began to fly over some of the recently solidified lava, and then we noticed a huge plume of steam up ahead. As we got closer our pilot advised us that this was the main area of activity on Kilauea and that we should see some lava here.

As we slowly passed over and around the crater we could actually see some fresh lava flowing. We saw a few small spurts of lava, and then a few other areas where it was flowing along. It was totally amazing to see - something you're not going to see too often in your life. You could really feel the heat from it too, even though we were high up in the air and it was so windy.

We spent a few minutes circling around the crater so that everyone had the chance to see it properly from each side and take lots of pictures. As we moved on we were able to see where another section of lava had set fire to some trees.

As the pilot flew is a bit further along where the flow had solidified, we could see that some people had built houses here and were living there - on the actual lava flow! They must be crazy.

We could get a appreciation of the vastness of this area from the air, it is incredible. We flew briefly over the sea and had a good view towards the coast, and then we headed closer to Hilo again and saw some beautiful waterfalls from the air. It was around this point that Stu's lens case became detached from his belt, so for the rest of the journey I was holding onto it extremely tightly. I don't think Stu's camera insurance covers lava damage!

Before we knew it, it was time for us to head back to Hilo airport again and land. The flight had been amazing. We are so chuffed we got to see some lava flowing - another trip highlight for sure.

After landing we got the opportunity to pose for a photo with our pilot, then it was off to collect our bags and head back to the hotel.

I had already packed my stuff before we left for our helicopter trip, but Stu just had to quickly pack his stuff so we could check out of the hotel.

The American woman who was on our helicopter trip advised us to pay a visit to Akaka Falls, which is about 20 miles or so north of Hilo. We had to drive over to the west of the island today to check into our new hotel, but was in no great hurry so we thought we'd check out the waterfall she recommended first.

Arriving at the falls there is a car park which costs $5 to park in, or you can just park the car on the road before getting to the car park for free. It doesn't take a genius to work out where we parked!

At the entrance to the falls there was a Hawaiian guy sitting down making various objects from huge leaves. He had made some bowls, hats etc., they looked pretty cool. Unfortunately I have no room in my backpack otherwise I may have bought one. He had a Jackson Chameleon on his arm and was letting people pick it up and hold it. I hesitated at first, then decided to give it a go. It was all fine, and Stu took some pictures of course.

The walk around to Akaka Falls was a 20 minute roundtrip. It was a nice peaceful walk, and there was a great payoff when we got to see the falls themselves - very impressive.

After seeing the falls we drove back to the nearest local town to find a spot for lunch. We found a great little place which did a fantastic pastrami wrap. We also opted for their homemade ice cream for dessert - very tasty.

After lunch we hit the road again to make our way over to Kailua Kona on the west side of the island. We have booked a hotel here for the next four nights. The drive would be about 80 miles or so. Stu slept some of the way as he was feeling very tired, but I ploughed on with the driving without a stop. The journey did take around a couple of hours, as you can't drive very fast over here.

Upon arrival in Kailua Kona we made our way to the seafront road where our hotel was located. The hotel is called Uncle Billy's, and it's in a very similar style to our hotel in Hilo. It's fairly low budget and looks a bit tired, but it was really cheap and it seems clean and tidy enough.

We checked into our room and took some time to relax. We arrived about 5pm so had some time before we had to think about dinner. Well, we tried to relax. For a while the guy downstairs spent about 20 minutes just shouting and swearing at his kids! But after that, it was a lot better.

We headed out for dinner around 7:30pm. We noticed that they have a Bubba Gump Shrimp Company restaurant here - we visited one of these restaurants while in Hong Kong and it was quite nice. So we decided to head there as an easy option.

We had ten minutes to wait for a table to be ready so just took a brief walk along the shops along the seafront. We also caught a glimpse of some Hula dancers in action.

We were soon being called for our table, and were seated at the back of the restaurant right next to the sea, which was really nice. The food was great again, but incredibly filling. Feeling quite stuffed we made our way back to the hotel.

We watched a bit of TV for a while - well in truth, just spent the time flicking through the channels as it was all total rubbish - then went to sleep.