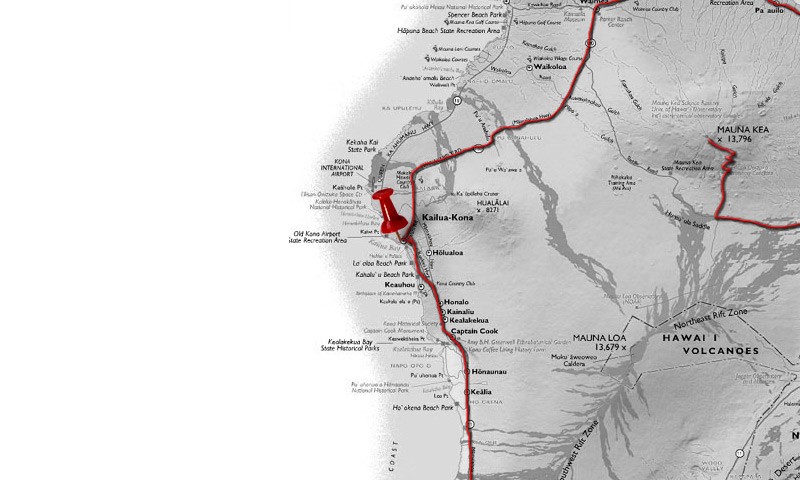 I was just drifting off to sleep last night when the 'swearing man' in the next room came home with his wife and decided to have the loudest conversation known to man at 2am! As annoying as it was, at least we have earplugs so I was able to block him out and get a good night's sleep eventually.

This morning we were up around 9am. This meant we had missed the hotel's complimentary breakfast - again - but we decided to grab a bite to eat at one of the restaurants on the seafront before heading out for the day.

Today we decided to drive along the Kona Kohala coast, heading south from Kailua Kona.

After enjoying driving the coast for a short while we made a stop at Pu'uhonua O Honauau National Historical Park. This park preserves the site where, up until the early 19th century, Hawaiians who broke a kapu (one of the ancient laws) could avoid certain death by fleeing to this place of refuge. The offender would be absolved by a priest and freed to leave. Defeated warriors and non-combatants could also find refuge here during times of battle. The grounds just outside the Great Wall that encloses the puʻuhonua were home to several generations of powerful chiefs.

Whilst there is little to see of the original structures here, caused by years of ocean damage, they had a reconstructed temple and other thatched structures.

However, what made this really worth the visit were the fantastic wooden carvings which stood around the reconstructed mausoleum and other areas of the park. This, as well as spotting some sea turtles in the shallow bay (oh, and nobody standing at the entrance kiosk so we got in for free) made this well worth the stop.

After leaving the park we carried on our coastal drive. We took a slight detour down to Kealakekua Bay, and then continued our drive. Stu decided he wanted to make a stop for lunch, and noticed a pizza place detailed on our map in a town called Ocean View, so we headed here for our next stop. With only a few dollars left in cash, the pizza place not taking card payments and the nearest ATM not accepting Stu's card, we thought we were out of luck. Luckily, after trying my card in the ATM we successfully withdrew some cash, and Stu got his pizza. Phew! No idea why his card didn't work though.

I didn't realise that Stu had ordered a 15 inch pizza though! We drove up to a scenic spot up ahead to eat a couple of slices but there was no way we were going to finish it now. We thought we might have the rest for dinner later.

Continuing our drive we noticed in the distance a wind farm located on a stretch of the coast heading further south. We soon came to a turning which took us past the wind farm and further down to the southern tip of the island. Here we would come to the southern most point of the United States. The route got a bit bumpy for the last mile or so as the paved road became a bit less well maintained, but we took it slow and steady - we no longer had a four wheeled drive so couldn't go too fast here.

At the end of the road we parked up, and noticed quite a few people around the cliff edge. As we wandered up towards them we realised that some of them were actually jumping down into the sea, and it was quite a height. There were an American couple just about to jump off the edge, so Stu offered to take their picture and send it on to them later. They seemed really grateful and gave us their email address so we could forward on the photo to them.

After psyching themselves up for a few minutes they finally made the jump together. Rather them than me, but it was cool to watch.

A few metres back from the cliff edge was a big cave-like hole in the ground. On closer inspection it was actually a hole through to the sea. It looked a pretty dangerous way to get into the water as the waves would frequently come crashing in and up against the rocks there. However, there was one guy who said he was going to jump down into it. It looked terrifying, and I think I was both fascinated and scared to watch. After waiting a few minutes to try and time it right for a high wave to come in, to deepen the level of the water (and lessen his chances of hitting rocks under the surface) he finally made the jump. We waited to make sure we could hear his voice after jumping, just to make sure he did survive - which thankfully he did.

We got back in the car and made our way back up the, sometimes bumpy, road to get us back onto the main road again. It was about 4pm by now and we noticed that the fuel level was looking really low. We had enjoyed our coastal drive today and thought it was a good point to start heading back. If we had continued much further round this road going anticlockwise round the island, we would just end up back in the Volcanoes National Park - which we have already visited.

We made it to the petrol station with the fuel level just one notch above empty, and decided to put in about three gallons of fuel. We don't want to fill up as we are supposed to return the car empty of fuel, as we won't be refunded for any fuel left in it.

We then began to leave the south of the island and make our way back to hotel. It was a slow going drive, as is usual in Hawaii. It probably took us just over two hours to get back, which is around 60 miles (96 km). It also started to tip it down with rain on our way back too, which was actually quite nice as it cooled the air down quite a bit.

As we were approaching Kailua Kona, we noticed that the sun was just about to set on the horizon, and it was a brilliant deep red colour. We were on a main road at the time and couldn't stop, so I pulled off the main road as quick as I could and find a place to stop to allow Stu to get a picture. Just as I stopped the car I could see the last of the red sun going down beyond the horizon - damn, we were just a fraction too late!

We continued back to the hotel. Here we had the remainder of our pizza for dinner. It made sense to eat the pizza rather than pay to eat out again tonight. We also had a couple of glasses of wine, as Stu bought a bottle the other day.

We found Godfather II on the tv, so settled down and watched that. Stu nipped out halfway through to grab us a couple of chocolate bars as a little treat - that's my Valentine's gift apparently! A nice relaxed evening.