Out And About In Honolulu 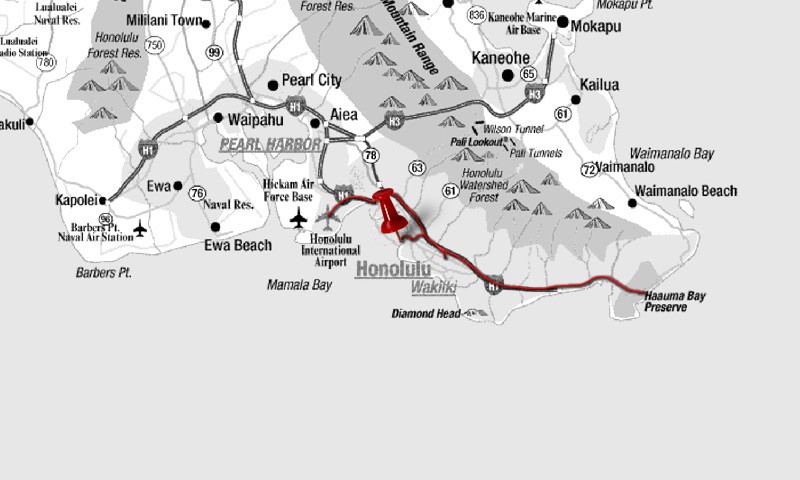 Today started off a little later than expected. Stu had to do a bit of work last night, so we were a little late getting up this morning. After getting showered, having some breakfast and discussing what we were doing today we probably left our condo around 11am.

Last night, after reading a few reviews online, we opted to buy a sat nat application for the iPad. It looks really good so far, but the real test will be when we take it out on the road. It should make things a bit easier, especially when we are driving on the mainland.

Today we decided to head into Honolulu first for a bit of a walk around. We found a car park near the Aloha Tower Marketplace where we could stay for three hours for $3 - bargain. (The sat nav application made a big error almost immediately by trying to get us to turn into a road which we weren't allowed to turn into. From here on though, it worked fine).

First we walked over to the Aloha Tower itself. At the time of building in 1926, this iconic tower was Honolulu's tallest building at 184 feet (56m). It is now surrounded by street level shops and restaurants. We noticed a lift at the bottom of the tower and decided to go up. We checked with a security guard who was seated near the lift. After checking our bags (well, I'm not sure he actually looked in the bag at all as he was more interested in eating his lunch) we got into the lift and headed for the observation deck on the top floor.

There were four doors at the top, each opening to a different side of the tower, and of course a different view out. Whilst the tower is only ten floors high, the views were still very pretty and Stu managed to get some lovely shots.

After coming back down from the tower we took a brief wander past some of the shops in the marketplace. What struck us immediately was how quiet it was. It must have been at least midday by now, a time you would expect to see people flocking around the shops and restaurants, but it was almost deserted. Did they know something we didn't...? I guess it is technically winter - although it still feels like the peak of summer!

Most of the shops were pretty standard fare - jewellery, clothes etc. We did see a cool ukelele shop though, and there are of course the stands selling lei flowers and Hawaiian shirts. At the front of the marketplace is a guy in a small stand to offer help to visitors. Everyone who walks in or out of the marketplace gets a "Thanks so much for stopping by guys" or a "You have a wonderful day". He sounds like the happiest man in the world - which is pretty cool for someone who essentially spends all day sitting in a box giving out maps to Japanese tourists!

We had checked directions to the Iolani Palace with the happy man, and headed straight over to it - just about a ten minute walk from the marketplace.

The Iolani Palace is the only royal palace in the whole of the United States, and served that function for just eleven years. King David Kalakaua took up residence when building was completed in 1882 followed by his sister, Lili�uokalani, who reigned for only two years before the monarchy was overthrown in 1893.

Following it's royal function, the palace became the seat of government, and in 1895 Lili�uokalani was imprisoned here for nine months. Once the government moved to another building the palace became a set for Jack Lord's office in the television series Hawaii Five-0.

The grounds of the palace are a lovely place to walk around in, and the building itself is fairly impressive. There is the opportunity to purchase tickets for a tour inside the palace, but we were quite happy to just walk around outside. There are some magnificent trees in the palace grounds, and we even spotted some interesting looking parrots in some of them.

Across the road from the Iolani Palace is the statue of Kamehameha the Great, who ruled the islands from 1795 to 1819. He is Hawaii's most revered monarch. This Hawaiian chief is credited with uniting the islands of Hawaii. The bronze statue, with its gold leaf feathered helmet and cloak, is one of the most famous sights in Hawai�i. The original statue was lost in a storm, and this replica was unveiled by King Kalakaua in 1883. However, apparently the original statue was recovered by divers the same year and erected in Kapa�au.

As lunchtime had well and truly arrived, and it has been a lovely hot day so far, we decided upon some refreshment. Earlier we had walked past a few nice eateries just by the harbour, so we headed back that way. Stu immediately opted for the Hooters restaurant there - I can't imagine why...

Lunch was actually quite nice. We both opted for fish and chips and a couple of refilled soft drinks - which we have come to realise seems to be the norm here. Stu got a bit of a dressing down from the waitress for not finishing all of his chips though. I believe the waitress said he was "a disgrace to all women". Not quite sure what she was on about, but I guess these girls aren't hired for their intellect.

After lunch we headed back to the car. Just as we stopped at the barrier attendant, I handed over our parking ticket and our $3, only for her to inform us that it actually cost $15! Apparently, in order to qualify for the $3 price we were supposed to get our ticket validated from one of the restaurants in the marketplace. Bugger! (We didn't see this written anywhere on a sign, only the cost of $3!) There was no way we were going to get ripped off for parking, so I parked the car up again while Stu made a dash back to Hooters to get our ticket validated, and then we could proceed out of the car park only $3 out of pocket.

It was still only early afternoon, so we decided to take a scenic drive back to the east coast, and head towards Makapu'u Point and Lighthouse. I had read in a brochure that it was supposed to be a good lookout here, so it seemed worth a visit.

The coastal drive itself over to Makapu'u point was lovely in itself. There were a couple of scenic lookouts along the way where we could park up and jump out the car and take a quick look. There were some lovely views of the mountains, as well as great views out to sea. While we were at one lookout we even spotted a whale just after it has breached and splashed back into the water. We kept a lookout for more whales after this. Although we could see they were out there, and could spot the odd splash and squirt of water, we didn't get any better views. Perhaps another day.

We soon arrived at the car park for the walk to Makapu'u. It's only about 15 miles from our condo in Waikiki, so not far away at all. From the car park there is a pathway to take you to the lookout and lighthouse. However, there were no signs to indicate how long the walk would take. We were aware that we didn't bring any water with us, but we assumed it would probably be ok.

The walk was uphill, but fairly gentle. Whilst the sun was still blazing, there were some welcome sea breezes and the odd bit of shade as the pathway winded around the coast. We spotted a few more whales out to sea, but unfortunately none of them were breaching. We did spot an unusual bird though, and Stu managed to capture some good photos.

The walk to the top probably took around half an hour, but was very pleasant and not too exerting. (Feeling glad we had the refills of soft drink back at Hooters earlier!) The lighthouse itself was lower down the cliff, so whilst we couldn't walk to it we could view it from above.

There was a lovely lookout at the end of the path, a really impressive sight. Then we took the even more pleasant walk downhill back to the car, and headed back to the condo.

Stu took a bath when we got back while I headed to the supermarket down the road to get some bits for dinner. After two days in a row of eating something fried with chips I was craving some vegetables, so stocked up on some salad items and freshly cooked chicken from the deli.

This evening we put on the tv in the condo for a while, just as a bit of background noise. We managed to catch a programme called 'Man v. Food'. It's basically a show where the presenter visits restaurants all over the US and attempts various food challenges - like eating giant, oversized pizzas, burgers etc. In one place, which happened to be a restaurant not too far from us in Waikiki, he took the 'Mac Daddy pancake challenge'. This involved him attempting to eat a 4lb stack of giant blueberry pancakes (each one the size of a 12 inch pizza) in 90 minutes. Apparently around 400 people have attempted the challenge, but only four have succeeded. Needless to say, the presenter also failed. I don't think I'll be attempting that one!

We were planning on visiting the Diamond Head Crater tomorrow, but luckily I checked the website which advised that the trail is closed tomorrow for renovations. It's open again on Friday though so we'll probably go then. Tomorrow we are thinking about heading to the Pearl Harbor Memorial - although reviews online seem to suggest you need to get there really early to get tickets to the memorial on the water, so we'll see what time we can get up...