Standing Inside A Giant Redwood 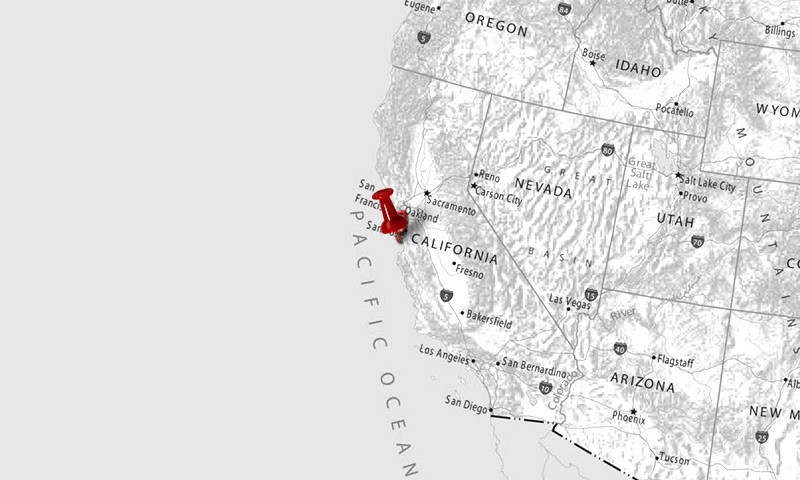 We both slept pretty well last night, our first night in our motorhome. We were cozy and warm inside, despite the cold and rain downpour outside which I think lasted all the way through the night. Thankfully, by the time we were up this morning the rain had stopped, although it still looked quite dull outside.

After some breakfast, we both had a shower using the facilities at the campsite - which weren't too bad. The only slightly puzzling aspect was the toilet (the ladies block only had one), which was positioned about 15 centimetres from the door meaning you had to effectively sit on it 'side-saddle'! Very strange, seeing as there was about a foot gab between the back of the toilet and the wall!

Anyway, we had a brief look at the map to see where we would be heading today. The general direction would be down to Santa Cruz, heading back towards the coast again. Stu had spotted a nice drive which would take us through some State Parks along the way.

Our drive took us through some lovely forested areas with lots of winding roads - my favourite type of driving! We found a scenic spot to stop at along the way where we could make some sandwiches and a pot of tea for lunch and admire the view. Stu took some photos here too. Then it was back in the van to continue our drive.

We soon began to drive into the Big Basin Redwoods State Park. This is California's oldest State Park. It was established in 1902, and is home to the largest continuous stand of ancient Coast Redwoods south of San Francisco. Archaeological evidence has been found to show that prehistoric people inhabited the old growth forest, although sporadically, within the Park. Numerous resources would have been available to California Indians in the old growth forests, such as basketry material, plant foods like acorns and bulbs as well as animal prey for hunters.

Upon arrival at the park headquarters you need to pay a fee of $10 to be able to park there. The woman at the kiosk also provided us with some information about possible walks we can do in the park. We didn't feel like doing anything too strenuous today, but opted for the fairly flat walk along the Redwood Trail loop. The leaflet about the park cost 25 cents, which gave me the perfect opportunity to get rid of all the one cent coins I had been collecting since arriving in the US!

The trail took us past some of the biggest and most significant coast redwood trees in this region, and was really enjoyable. The redwoods are amazing, so incredibly tall, spectacular to see.

We saw the tallest redwood in the park, which stands at 329 feet and is known as Mother-Of-The-Forest. The base of the tree has been completely hollowed out by fire so you can stand inside. It was a bit spooky though standing in and looking up into the darkness of the tree.

Another redwood tree known as Father-Of-The-Forest was close by, and is estimated to be 2,000 years old. I think the shape of the front of the tree may be the reason for its masculine title...

Another impressive looking tree on our trail is known as the 'Chimney Tree'. This tree is completely hollow from bottom to top. We actually stood inside the base of the tree and could see the sky out of the top of the tree. Yet unbelievably, this tree is still living and growing. The theory is that several fires over the years have ignited the heartwood of the tree, eventually creating the chimney effect. This stands as a shining example of the durability of coast redwoods.

Also along the trail were some other redwoods which unfortunately have succumbed to the effects of fire. We saw quite a few burnt out shells of redwood trees, as well as some which have rotted and decayed over the years too. Impressive to see such large trees which have fallen over and just been left to rot.

The Opal Creek which runs along part of our trail was moving really fast, due in part I am sure, to the heavy rainfall last night. We spotted quite a few mini waterfalls in the park and along our drive today caused by the rain.

After an enjoyable walk along the redwoods trail we found ourselves back at the car park and continued on our drive. This road would continue to lead us through the park, and eventually out towards Santa Cruz.

Apart from a brief stop in a local town to pick up some after dinner treats, we drove non-stop to Santa Cruz where we would look to stay for the night. As we drove near the beachfront I could just spot some of the roller coasters in the distance - they could well be the same ones as seen in the film The Lost Boys (as Santa Cruz is where it was filmed). I didn't spot any vampires though...

After a bit of a drive around town we eventually found an campsite, just in time before the daylight completely went. We had leftover spaghetti bolognaise for dinner (which always tastes nicer the next day, I don't know why) and we settled in for the night.