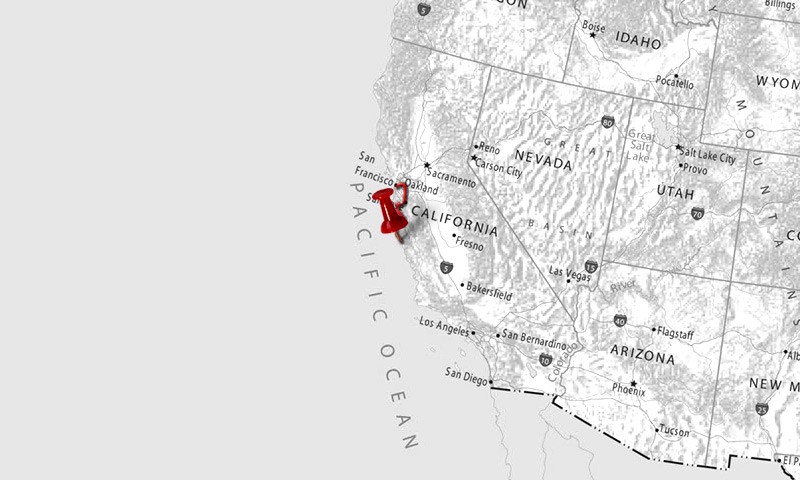 Despite being cosy and warm and very comfortable last night I had a bad headache, so therefore had another restless night. At least we were up a bit earlier than yesterday so we could get going.

After Stu went to register at the campsite office and pay up, it turned out that our campsite didn't cost $55 as stated, but $61.60! This is because they add the tax on afterwards, something they do quite often in the US so we have noticed. Stu told the lady who he paid "It's very expensive, isn't it?", to which she replied "Yes, it is!". Well, at least she's honest.

After leaving the campsite we headed over to the Walmart nearby to stock up on supplies. Stu went in while I waited in the motorhome. When he came back he said that the choice of food in Walmart was terrible. He struggled to come out with some fresh vegetables at all, which is surprising considering the size of the place.

We decided to take the 17 Mile Drive which is a driving loop just south of Monterey which takes you through Pebble Beach and the Del Monte Forest. It's was a nice drive and there are some lovely views out along the coast. It also appears to be where the rich live, as there are plenty of huge, fancy houses along the drive too. I'm not entirely sure the reason for the $9.50 charge to take the drive, but it was enjoyable. Pebble Beach also has a world famous golf course where the US Open has been held on many occasions.

After leaving this driving loop we continued driving south on highway 1, and took the turnoff at Point Lobos State Reserve. Here we could park up our motorhome and take a walk right up to the cliffs, where we could see both harbour seals and sea lions laying on the rocks down below. The sea lions were a little harder to see as they were on the rocks further away, but one of the park rangers had set up a scope where you could see them really close up.

We took a nice walk around the coast here, looking at the seals and admiring the coastline. Stu got some lovely shots and we were once again really fortunate with the weather as there wasn't a cloud in the sky and it was actually quite nice and warm. The only slight issue was Stu slipping on a rock and scraping his hand and arm a bit. There was only a little bit of blood though, and the camera was held aloft so no damage was sustained there.

After a nice walk along the coast we got back to the motorhome and decided to exit the park and continue our drive south. We would be heading towards the coastal drive known as The Big Sur. This is a 94 mile (151 km) stretch of coastline finishing at San Simeon. We managed to make a start on this drive and saw some wonderful, dramatic scenery. However, the day was getting on and we decided to find a campsite to stay the night. The first place we came across was $50 for the night, but they had no wifi. We continued onto the next which was $45 and had wifi but only in their office. So we decided to try at the next state park as we knew they had campsite. Here the sites were $35 but there was no power hookups and certainly no wifi. We decided to head back to the middle place we saw and swallow the $45. The setting of the campsite seemed really nice and it was right next to a lovely river, and there was hardly anyone else staying here so it was really peaceful.

Stu cooked up a great dinner of chicken and rice, washed down with a nice glass of wine. Then he had a little bit of work to do while I started work on today's blog. When I nipped out to use the toilet in the campsite I noticed that we have a beautiful clear night sky here tonight, and the stars look amazing as there is very little light pollution here. Stu and I both stood outside for a while looking up in amazement - it still always blows my mind seeing all those stars up there.

Tomorrow, we continue our drive along The Big Sur.