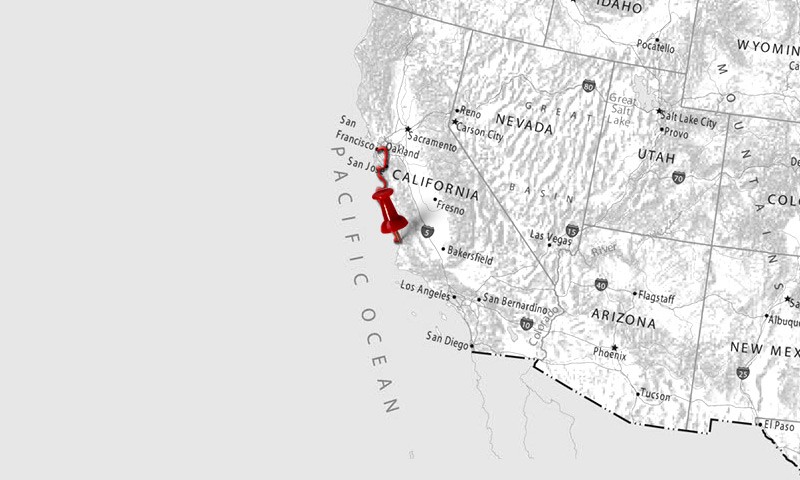 It was a sunny and fairly warm start to the day today. I headed off for a shower at the campsite shower block, and have to say the showers here were really clean and very spacious which makes a pleasant change. It cost 25 cents for every two minutes of the shower, which isn't too bad. When Stu headed over later he must have picked a bad shower though as I saw him walking out of one and into another. It did look quite funny seeing him wander out with his towel round him, yellow shower puff in hand, and go to the next one.

While still in the campsite we spotted a woodpecker sitting on a nearby tree. Unfortunately, as soon as Stu went to get his camera the woodpecker flew away. Typical. It was to be the beginning of a fantastic day for spotting wildlife however.

After leaving the campsite we continued our journey along The Big Sur.

There was more dramatic scenery to come along this amazing stretch of coastline. The drive itself is enjoyable enough, as it winds its way around the cliffs. The view out to sea is truly amazing. There are also plenty of opportunities to stop and take it all in. More often than not when we made a stop, we were accompanied by some chipmunks. These little creatures were very friendly, probably because they thought we had some food for them. Another couple who stopped at the same time as us decided to start feeding them bread, which did irritate me. How many times do people need to be told not to feed wild animals?

Talking of chipmunks, Stu seems quite determined that these are not chipmunks at all, but squirrels. I tried to point out the fact that they didn't have a bushy tail, and that we are in completely different terrain to where squirrels normally live, but he wouldn't have it.

You tend to meet up with the same people along these kind of drives, as each of you stops off at the same spots. We saw a guy a couple of times who was driving his mother around. We got talking to him when we stopped to watch some birds of prey swooping around the coastline. After chatting with him, he seemed to think the bird in question was a condor, as it had a bald, red head. We saw lots of these birds along our drive from time to time.

At another stop off we were greeted by several birds and animals all at once. We had a couple of huge seagulls, some chipmunks, the swooping condors above us and some rather unusual noisy birds. They were about the size of a starling, with black, iridescent feathers and they made the weirdest sound which just sounded like a slurp. When I first heard it I thought it was some kids making the noise, but then realised it was all these birds. It was truly the weirdest bird noise I've ever heard. Stu took a video of them so hopefully we'll be able to demonstrate this at some stage.

We took the opportunity to stop for a coffee when we saw an Espresso Bar further along the road. The coffee was burnt, but it was still a much needed caffeine hit to help with the driving today. Whilst Stu nipped to the loo and I waited outside, I spotted a tiny bird in the tree. It was only when I saw it sitting near a regular bird that I realised just how small it was - about two thirds the size of a starling I would say. I wondered what it was at first, and it was only when it began to flap its wings that I realised it was a hummingbird. If only Stu had been here to capture it on camera!

Further along The Big Sur, as we drove past a very small beach area, Stu said he thought he saw a seal on the beach. We noticed that some people had parked up and were looking, so decided to turn round and park up to see what it was. Sure enough, on the beach were five male elephant seals laying on the sand. They weren't doing very much, but now and then making the odd burping sound.

We didn't realise that this wouldn't be our last encounter with the elephant seals today, and that there would be even better to come.

A little further on there was another small beach area with a car park, so we decided to stop here. There were a few more elephant seals on this small beach, but we decided to take a walk along a pathway which lead further round the coast. Along the way we spotted a few wild rabbits. They didn't want to come too close, but didn't seem too afraid of us either.

Eventually this pathway led us to a much more secluded beach which was filled with elephant seals, both male and female. (The male ones are the most distinctive because of their immense size and their unusual overhanging nose). We were also a lot closer to these seals as the edge we were standing on came further down to the beach area. We spent a good 25 minutes or so just standing around here watching the seals. Some were just coming out of the water and making their way up the beach, others were having little arguments with each other or playing around. They were fascinating to watch and I could have sat there for ages. They make such loud noises too, like nothing I have ever heard before. Stu got some great shots too.

After leaving the elephant seals behind, we noticed that time was getting on. It would be getting dark soon and we needed to find somewhere to camp for the night. We stopped at a post office around San Simeon (the town which marks the end of The Big Sur) to ask if they knew where the nearest campsite was. They told us that the San Simeon State Park was just five miles further down the road. Perfect.

Upon arriving at the park we saw that nobody was at the entrance kiosk (which seems to be a familiar sight, we have noticed. I assume because it is off-season). So we continued to drive to the campground just to check what it was like. There would be no electric or water hookups at this campground, but we are ok without them, at least for one night, as the heater can be powered by the battery and we can use the on-board generator for powering electrical appliances if needed. There are also no showers, only public toilets, but on the plus side the campsite is only $20 which seems pretty cheap compared to what we have been paying.

After deciding we would stay here the night, we headed to the dump point to get rid of our grey water and empty the toilet - the less glamourous side of camping. Then Stu wanted to head back to see the seals again for sunset, so we drove back to one of the nearest vistas to watch the elephant seals as the sun went down.

Heading back to the campground in darkness, we parked up and settled in for the night. We hadn't stocked up on any more food for tonight so we made a bit of a random dinner using two tins of vegetable soup, some leftover chicken, onion, green beans and pasta. Sounds dodgy, but was actually really tasty.

Stu and I both looked through some of the pictures from today, then we decided on an early night as we were both feeling very tired.