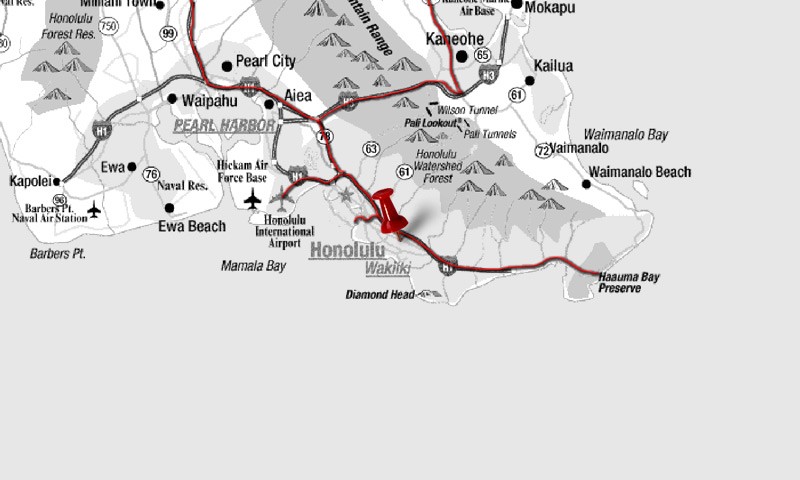 After getting to bed around 12:30am last night, as Stu had some work he needed to finish, we decided against the Pearl Harbor Memorial trip for today. We weren't in the mood to have an early start. Instead, we got up around 9am, had some breakfast in the condo, and set off around 11am. (Yes - Stu had some more work which needed to be done. The joys of running your own company I suppose!)

We decided to head out of the city today and take a drive up to the north coast of the island. This would mean taking the main highway most of the route, right along the east coast and heading north.

Unfortunately, as soon as we came out of our car park and tried to turn onto the main road we hit a complete standstill. It appeared there was a firetruck up ahead and police were blocking the entire road. We didn't realise this until we had literally just pulled out onto the road.

The road itself is one-way (like many of the roads in Honolulu) so we just had to wait it out until we could move far enough along the road to pull off. So, our journey had already taken us half an hour - and we only a few metres from our condo!

After coming off the blocked road, we managed to drive a bit further down a parallel road, and then return to the road a little further up from the blockage - and finally continue our journey.

After leaving the city the road becomes much more enjoyable to drive, just winding around the coast. The first scenic spot we came across, we pulled over. It seemed like a good opportunity to eat our packed lunch we brought with us, finding a nice spot by the water with views across a small harbour and also back towards the stunning mountains. We hadn't brought drinks with us, so Stu popped into a local gift shop to grab a couple of cans of drink and some chocolate bars. When he came back he told me the woman that served him seemed to have problems with adding up. When Stu presented a $20 note to pay for goods costing $3.50, apparently the woman rang someone else up asking "Can you tell me what 20 minus 3.50 is on a calculator, as my till is broken?" I'm not sure she should be working in a job handling money!

After enjoying our lunch on the grass in the sunshine, we got back into the car and continued our drive.

A little further along the road we came across another scenic turnoff. There was a car park here, so we parked up the car and took a stroll over to the coast. There was a thin beach line here, but the main thing to see was the island of Mokolii - more commonly known as Chinaman's Hat, due to it's shape. Facing inland we also had some more lovely views of the beautiful mountains too, so we wandered around here for a while so Stu could take some pictures.

The drive continued onwards around the coast. On the subject of driving, I think I am getting more used to driving on the other side now - helped, of course, by having an automatic car. A few observations about driving over here; firstly, the speed limits are very conservative. The fastest speed limit I have seen on a sign is 55mph, and that was on the motorway. More often than not the speed is about 35mph though, which is pretty slow. That's not to say that people stick to the limits however - more often than not they don't. Secondly, the speed limits are never given in increments of ten, but in increments of five - for example, 35mph instead of 30mph. I'm not sure of the reason for this, but it is a bit irritating.

After seeing Chinaman's Hat we drove past the Kualoa Ranch, a big tourist attraction here on Oahu. Here you can do horse riding, ATV and movie location tours, hula dancing and quite a few other things. We didn't visit today as we just wanted to drive to the north, but we may come back and do a tour before we leave Oahu.

As we approached an area called Hauula, Stu noticed on our driving map a placed called 'Sacred Falls'. We thought it sounded worth a visit, although our map was not detailed enough to work out exactly how to find it. We also tried using the sat nav to work it out, but still no joy. It was only a ten minute drive around, so didn't waste too much time doing this, but we couldn't see it anywhere.

Continuing onwards we saw a sign for the Hawaii Temple. As we looked down the turning we saw a magnificent looking white temple at the far end of a long road, which was lined very neatly with palm trees. We thought this would be worth a look, and headed down the road and found a spot to park.

The temple looks very impressive. It looks very new and has some attractive gardens and lovely water features. We noticed a visitor centre over to the right, and we were half tempted to wander over. Then we noticed a sign which read "the distribution of non-LDS material is strictly forbidden" - so obviously a Mormon temple then! We decided to give it a miss (after taking a few pictures outside, of course!)

A short drive on from here and we were driving over the northern-most part of the island. The water around these top end beaches is known for producing huge waves, and attracts expert suffers from around the world. We stopped at a couple of the quieter beaches, and could see the waves were certainly bigger here than down south at Waikiki, but they weren't at their highest today.

We took a stroll across one of the beaches. There were just a handful of people there so it was really peaceful.

We drove past Waimea Valley, another of the tourist attractions on Oahu, but nothing that particularly interested us. I believe there was a botanic garden and some other things, but we were happy to continue our drive.

A little further on we saw a sign pointing to an 'Historic Town' - which sounded worth a look. This was the town of Haleiwa, essentially a sleepy surf town in the north west of the island.

We decided to take a stop here, firstly because Stu spotted a hardware store and needed to buy some electrical plugs for his laptop etc. (don't ask!) However, after he had done that we were both feeling a bit peckish - all this driving around had been making us hungry! I had a flick through our drive guide and noticed an advert for a sandwich shop, which just happened to be a couple of doors down from where we parked.

We headed into the sandwich shop, ordered a couple of hot pastrami sandwiches and some soft drinks. I have to say, when the sandwich arrived it looked great. It came with a big chunk of carrot - healthy! But the sandwich tasted even better than it looked - delicious!

The day was getting on and we had seen plenty along the way, and decided to head back to the condo. As we had driven here along the coastal road, we decided to take the road back which goes through the middle of the island. We thought perhaps this way we might get to see some of the more inland mountain scenery. We were wrong! We saw a few mountains, sure, but what we saw more of than anything else was the motorway. Oh, and a lot of traffic. As we approached Honolulu the traffic really began to build up, and it was quite slow moving for the last five miles or so. It was actually a relief to get off the motorway and back to our condo.

Stu had to do his tax return (joy!), so I helped him with this where I could and then let him get on with a bit of work. Meanwhile, I also booked us a hotel for the last couple of nights here before we fly to Hawaii Island. Our condo was only available until 6th Feb, but it was the best one I came across and was available for most of the time we needed it, so I went ahead and booked it. It just meant we needed further accommodation from the 6th to 8th Feb - so that is now sorted. I found a hotel just a couple of blocks from our condo, and it has free parking, free internet and a room with a full kitchen - perfect!

We had leftover salad bits for dinner, and then just time for me to get the blog up to date and Stu to finish his work.

Tomorrow we plan to visit the Diamond Head Crater, which we can actually see from our balcony. You can take a walk to the top of the crater and there is supposed to be lovely views. Looking forward to it!