On Top Of A Crater 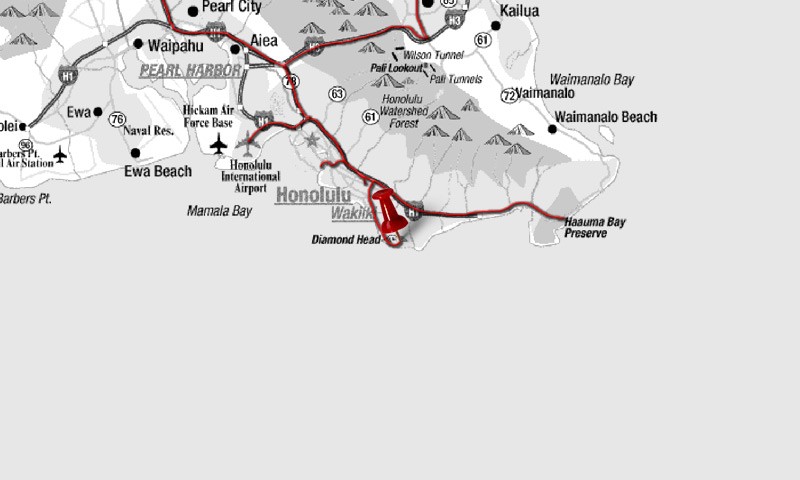 This morning we decided to take the walk up the Diamond Head Crater. The reviews I had found online recommended going either early or late in the day, to avoid the midday sun and the crowds of people. I had hoped to leave the condo around 9am, but it was just after 10am that we actually left - I didn't want to wake Stu when he looked so peaceful :)

To get to the Diamond Head Crater Park from our place was dead easy, it was just 10 minutes in the car. You drive through the side of the crater through a tunnel to get to the main car park, which is basically in the middle of the crater. The charge is $1 per person or $5 for a car - fairly reasonable.

With our entrance ticket we were given a leaflet which contained a bit of information about the crater, which I can summarise for you now. The formation of the island of Oahu itself began around 2.5 to 4 million years ago with volcanic eruptions. The Diamond Head was formed around 300,000 years ago, and it was believed to have formed from a single, brief volcanic eruption.

The crater as it now stands covers 350 acres, and it's highest rim on the southwest side was caused by the wind blowing ash in this direction at the time of the eruption. The sides of the crater have eroded down over time, caused by wind, rain and sea.

The Diamond Head Crater was named as such because Western explorers mistook the natural calcite crystals in the rocks for diamonds when they first arrived in the 1700's. It is the most recognised landmark in Hawaii, and was designated a National Natural Landmark in 1968 as an excellent example of a tuff cone. (A tuff cone is where an eruption occurs in the sea, and the magma is broken down into ash and fine particles. These particles are then blown into the air and cement together into a rock called tuff.)

As we started our walk up to the crater top, we were quite amused by the footwear worn by some of the other tourists around. Whilst any website or article I could find about the walk to the crater advised the wearing of trainers or hiking boots, it amazed me to see people strolling up in flip flips and heeled shoes. Unbelievable! The trainers were definitely needed too. Whilst the path starts off paved, the concrete soon ends and you are walking along a very uneven dirt track which is steep in places. They are currently in the process of renovating the pathway up to the crater, and it's a good job we checked online about this as the trail was closed yesterday and only open today, because of the renovation works.

About 20 minutes into our walk up the crater, we soon realised why the recommendation was to come early or late in the day. Yes, it was hot - but that wasn't too much of an issue. There were just lots of people. This didn't matter at the start of the trail as the path started off easily wide enough. But further up the trail, the path became thinner and thinner. Bear in mind that you not only have people walking up the trail, but also those coming back down. Add into the mix the amount of overweight Americans, and now you see the issue.

Nearing the top of the crater, there is a section where you go though a tunnel. It isn't very long, but we were in there for several minutes due to the queue of people continually stopping for a while, as things became blocked up ahead.

Further on there was a large number of steps to get past, and after that a spiral staircase - not good when you have people going up and down. In the queue behind us was a woman from Vancouver who got chatting to us. She seemed very nice, and we told her that we would soon be in Vancouver at the end of our travels. She said "Oh, I'll have to give you our address and you can stop by!". Really? I don't think so! Why do people say things like that when they really have no intention of acting on it? I wonder what would have happened if I had immediately produced a pen and my address book and asked her to write it down for me...?

Finally however, we made it to the top! The area at the top wasn't huge, but it was easy enough to find some good spots and take in the view. It was an amazing view over Waikiki, towards the city and also over the sea. We even spotted some whales pit to sea too. Well worth the walk up there. Actually, the walk wasn't too bad at all. Lots of reviews I had read said how strenuous it was, but really it wasn't too bad. Yes, the stairs were hard going in the heat, but the rest of it was fine.

After taking in the lovely views for several minutes, we decided to head back down. Thankfully the walk down was a lot quicker. Going up probably took just over an hour, including all the hold ups, but coming down took well under half that time.

We decided to head back to the condo for lunch. I nipped over to the supermarket to get some bits, then fixed us some sandwiches which we enjoyed on the balcony.

I had a bit of a power nap after lunch, only for about 20 minutes or so, while Stu tried to make some headway on the blog.

This afternoon we decided to head down to Waikiki Beach. Stu really wanted to try some surfing, and I was happy to just go for a swim. The waves at Waikiki are supposed to be perfect for beginner surfers as they are really gentle.

We got down to the beach at about 4pm, which was perfect as the real blazing heat of the day had died down, and it was now just lovely and warm. Stu opted for a surf lesson, while I sat down on the beach for bit and watched him paddle out with his instructor.

After about 20 minutes in the sun, the temptation of the water became too much and I ventured in. The water was absolutely perfect! The waves were gentle close to the shore, which made it fine for swimming, and the water temperature was just right too.

I think Stu must have had just over an hour and a half surfing. He said that he stood up on the board most of the time - I wish I had been able to see, but due to the sun's position on the water I couldn't see out that far at all. Unfortunately, he managed to cut the bottom of his foot on some coral while he was out surfing, but he said it didn't spoil his fun too much. He came and paddled around in the water with me for a bit, then we decided to get out and head back to the condo, just as the sun was beginning to set.

After an exerting day, we opted to treat ourselves to a meal out tonight. After showering and changing we took a walk out heading in the direction of the beach, in search of a nice restaurant. We found one which looked really nice just a few minutes walk from our condo. The menu looked great with a mixture of Hawaiian, Thai and American food, and at fairly reasonable prices. But Stu suggested we carry on walking.

I was feeling really hungry, and hoped we would find something soon. There were quite a lot of burger places and grills, but we didn't really want that. We found another restaurant after 20 minutes walking or so which looked good, but after checking the menu we saw that it was really expensive.

After all of that, Stu said "Shall we go back to that first restaurant we looked at?" I calmly replied "Yes", but couldn't help thinking that if we had gone there in the first place I would be happily tucking into my starter by now and sipping on a nice cool beer. Never mind...

It turned out that the restaurant we chose was really nice, so it all didn't matter in the end. I opted for Thai spring rolls and shrimp in garlic butter, while Stu opted for satay chicken and a fish cooked with Ginger called Opakupaku. I also opted for the local beer too, which was really good. A great meal all round.

Another thing I have noticed so far here (I'm not sure if this is just a Hawaiian thing or whether it's US-wide), but as soon as your drink is getting low at a bar or restaurant, the waiter/waitress asks if you want another. This has happened at every place so far, and I like it! There is nothing more annoying than finishing your drink, and then trying to attract someones attention to get you another one. I could get used to this service!

Tomorrow we have booked an ATV (All Terrain Vehicle) tour at Kualoa Ranch (the place we drove past the other day on our way to the north shore). The tour is supposed to take you to see various movie set locations and scenic views, so should be fun. However, the weather forecast says there may be some rain - fingers crossed it's nothing too bad.