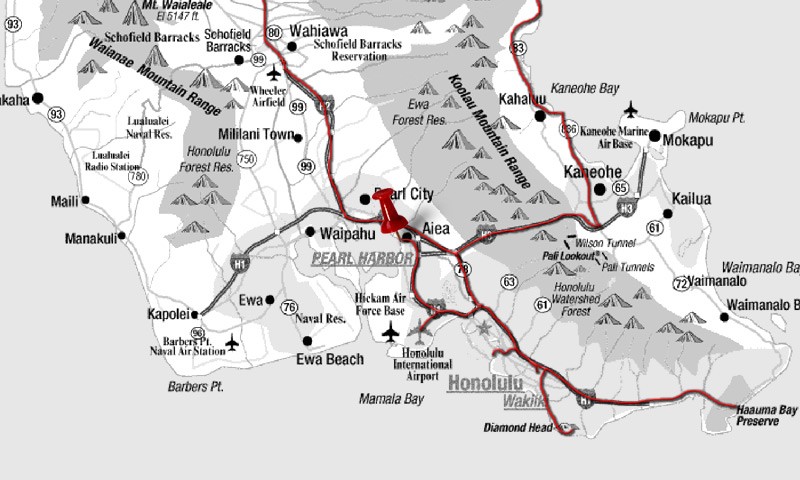 We had an early start this morning as we were going to visit the USS Arizona Memorial at Pearl Harbor. I had read quite often on review sites for the memorial that it is advisable to get there early. The actual memorial itself is only accessible by boat, and when you arrive you are given a ticket to access it. Groups are taken over and it is all based on a first-come-first-served basis. Therefore, arriving too late may mean waiting for several hours before you get to visit the memorial. I had read from one reviewer that they arrived at 9:30am, and would have faced so long to wait that they just came back the next day and got there a couple of hours earlier. As we are flying to Hawaii Island tomorrow we don't have the option of coming the next day, so we wanted to make sure we got there early enough so we didn't have to wait too long to see the memorial.

We ended up leaving the hotel just got 8am. The sat nav said it was only a 15 minute journey, but we knew that it would take longer than that with the speed limits and traffic in Honolulu. The website I found about the memorial advised the journey would take around 45 minutes.

We arrived a little before 9am, and you could see from the car park that there were already a lot of people there. We just saw a load of people getting of a tour bus so we walked quickly enough to get in just before they did.

There are quite strict rules about entering the memorial visitor centre, and the memorial itself. No bags of any kind are allowed. I left my rucksack at the hotel and had my money and keys in my pocket, and Stu had to leave his camera bag behind in the car boot.

At the ticket desk we requested tickets for the USS Arizona Memorial, and were given the 11am time slot. This gave us a couple of hours wait, but this was fine as there were lots of things to see at the visitor centre before going to the memorial.

I am glad we had got there early.

The tickets for the memorial and entry to visitor centre are all completely free, so it makes for a perfect day out. While we waited for our trip to the memorial we took a wander around the huge grounds of the visitor centre, which included exhibits both indoors and outside. There were lots of displays showing the various types of torpedoes, guns and submarine parts. We could see the USS Bowfin submarine moored up. There was the opportunity to walk on it too, but you had to pay for this and we could still get a great view of it from the shore.

We decided to grab a quick coffee before commencing our walk around the grounds.

Along the shoreline there are lots of pictures and things to read about WWII and the attack on Pearl Harbor. There are also many plaques which detail those who served on each of the vessels.

It was an interesting walk around the grounds, and full mainly of people in quiet reflection - with the exception of a group of Japanese tourists who were squealing and laughing while they each took a million pictures of each other, which was rather irritating.

The weather today was forecast to be cloudy and with some possible rain. We had brought our waterproofs with us just in case, but the clouds soon disappeared and the sun came out. It was actually really warm, so we decided to drop our waterproofs back to the car.

We had a few minutes before we had to go for our visit to the USS Arizona Memorial, and so we wandered inside one of the indoor exhibits. Here there were some storyboards, pictures, videos and artefacts associated with the war and the Pearl Harbour attack.

Just before 11am we queued up for the start of our tour. The tour commenced with the showing of a documentary inside the theatre. It was on a massive screen and was really interesting. It told the story of the lead up to, and the aftermath of the Pearl Harbor attack, and I think it was a fitting way to start off the tour, to give people a real understanding of what had happened. It was fascinating to hear about how the events came about, the daring of the Japanese to even contemplate an attack and make their way across the Pacific to Oahu without detection. It was quite unbelievable how, the Japanese fighter plans were detected by the US on their radar system, but they thought it was their own planes returning and so decided to ignore it.

After the documentary finished we were lead out to the dock to board our board, which took us over to the USS Arizona Memorial itself. Unfortunately it had just started to rain at this point (would be a good time to have those waterproofs). Thankfully, it was fairly light rain though and the sun soon managed to break through the cloud and dry things up.

The USS Arizona battleship still lays in Pearl Habor on the spot where it was attacked and sunk. It also marks the resting place of 1,102 of the 1,177 sailors who were killed on the USS Arizona during the Pearl Harbor attack by the Japanese on 7th December 1941. It was this attack which led to the United States involvement in WWII.

The memorial has been built across the middle of the surface of the sunken battleship, and provides an area for people to walk along and view what remains of the battleship, with some parts still protruding above the water. It is sad to think how many of the sailors were never able to have a proper burial and therefore remain, with the ship, underneath the water. Since 1982, whenever a survivor of the USS Arizona attack has since died, their ashes have been carefully placed inside the sunken ship to rest alongside their fellow sailors.

At one end of the memorial it lists all of the sailors who died aboard the USS Arizona that day, as well as the names of survivors who have died in the years since the attack. When looking over the side of the memorial into the water, you can still see drops of oil emerging from the sunken ship and coming to the surface. The USS Arizona has been continuously leaking small amounts of oil since it sunk in 1941, and the condition of the sunken ship is monitored closely by the National Park Service to ensure no significantly large amounts of oil are released to the detriment of the environment. The seeping oil is often referred to as 'black tears'.

The battleship USS Missouri is docked close by to the memorial, and it was aboard this battleship in Tokyo Bay in 1945 where the Japanese surrendered to United States General Douglas MacArthur and Admiral Chester Nimitz, thus ending WWII.

We found the USS Arizona Memorial to be a moving and fitting tribute to those that died. It seemed to be simple, yet well organised.

After our return to the visitor centre we went inside one of the other indoor exhibits we hadn't yet visited, and after a good walk around inside we decided to call it a day. I imagine you can spend a whole day here looking at everything, but I think we managed to see everything we wanted to.

We took a drive back to the hotel and fixed ourselves some lunch. I think Stu was feeling the effects of the early start this morning and took a short afternoon nap too.

We had considered visiting Hanauma Bay this afternoon, as it would be our last opportunity to do so due to flying to Hawaii Island tomorrow. Hanauma Bay is supposed to be a great spot for snorkelling. But as Stu was feeling tired, and we wouldn't get much time at the bay by the time we would arrive, we decided against it. We will get plenty of opportunity to do snorkelling when we get to Hawaii Island anyway.

This evening we took a walk out to get some food at a nearby restaurant, and then came back to the hotel. I got some of my packing done this evening as we will need to check out of the hotel by 12pm tomorrow.