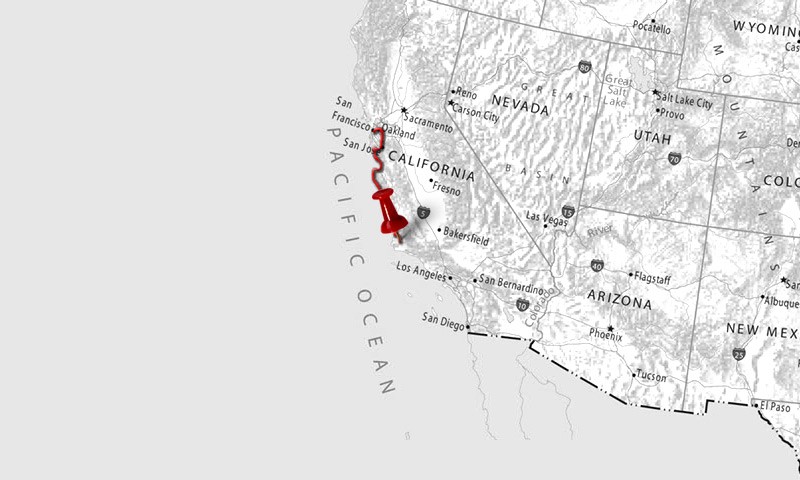 As there were no public showers at this campsite, Stu decided to use the shower in the motorhome this morning - which is essentially having a shower in a box. I decided to wait until the next campsite.

Using the public toilets here was an interesting experience. Upon opening the lid of the toilet there was just a huge black hole down to a sewage pit below. The horror film 'IT' suddenly came to mind and I found it quite daunting sitting over a huge abyss and made my way out of there as quick as I could.

After leaving the campground we headed back up the road to the town of San Simeon, as this is where the entrance road towards Hearst Castle is. Our guide book states that you need to make a reservation for one of the tours to Hearst Castle in the summer as it is one of the biggest tourists attractions in the whole of California. We didn't have a reservation but decided to see how busy it was, being that it is still winter.

Hearst Castle used to be the largest private residence in the whole of the US. It was constructed in 1919 financed by the newspaper tycoon and movie producer William Randolph Hearst. For 28 years craftsmen laboured to create the building on 'the enchanted hill'. Despite me not really seeing the big attraction of the place, our guide book described Hearst Castle as 'unmissable' so we decided to see what the fuss was about.

When we got to the car park at the visitors centre, Stu nipped in to see if we would be able to get on one of the tours today. It seems that off-season is certainly the best time to come as tour 2 was starting in 30 minutes and they still had tickets left. We left the motorhome and headed in to get our tickets and then get onto the tour bus. Only tour buses go up to the castle from the visitor centre.

The bus winds its way up to the castle at the top of the hill while a narrators voice comes over the speakers to give us a bit of history about the place. It was designed by architect Julia Morgan between 1919 and 1947 for William Hearst, who died in 1951. His original idea was to build a bungalow, although after a month of discussions with his architect the design took on much more grand scale.

The castle featured 56 bedrooms, 61 bathrooms, 19 sitting rooms, 127 acres of gardens, indoor and outdoor swimming pools, tennis courts, a movie theatre, an airfield and the worlds largest private zoo. Zebras from the zoo collections still roam around the grounds, and we spotted some today after we left.

The castle contains many different architectural styles, mainly influenced by the owner's travels around Europe. Hearst clearly spent money very easily, as on the one hand some rooms contain centuries-old ceilings from Spain which must have cost a small fortune and have been finished perfectly to fit in the room, yet other parts of the building have bare cement walls and were clearly never finished. It's a bizarre place, but was really worth the visit. The highlights are certainly the outside 'Neptune Pool' and the library, both amazing in their own ways. Apparently the Neptune Pool was rebuilt three times before it was to Hearst's exact taste.

Thankfully, each tour group is pretty small so you get a good chance to look around properly in each of the rooms, and don't feel you are being rushed at all. Plus, it gives Stu plenty of time to take some great pictures. Our tour guide was really informative and answered everyones questions.

After the tour, which took around 90 minutes or so, we got the tour bus back to the visitors centre. We were both quite hungry by now so got a bit of lunch here. The food was actually really nice.

When we got back in the motorhome we carried on our drive on highway 1 heading south. There were no other stop-offs today, other than to stop in Santa Maria for some food shopping and to find a campsite. We found a campsite not far from our freeway turnoff and after a couple of days without proper internet, we finally have wifi again!

Stu cooked up a great meal of fajitas tonight, and we both had the chance to catch up on emails etc. I also took a shower in the campsite shower block. Not the best shower in the world, but at least I feel clean again.