More Than A U2 Album 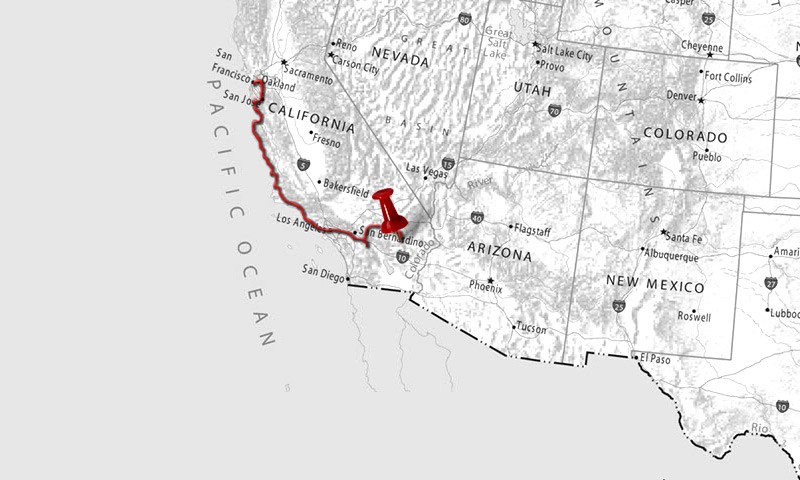 We awoke fairly early this morning. The intention was for Stu to sort through a lot of his photos for the blog, as we are getting a bit behind with it. He had several days to do, and I needed to check through what I had written too. The wireless internet at our campground can only be used in their office, so Stu got everything ready and then took the laptop into the office to upload some blog entries. Unfortunatley, while checking his emails he noticed that there was a major problem to do with his business which he had to resolve. He managed to do it, but unfortunately this ate into our time a little. We eventually left the campground at midday though, which wasn't too bad.

The weather is quite strange today as although the sun is really hot, the air is really cool. This actually makes it quite pleasant, although you still have to be careful of the sun's rays.

Joshua Tree National Park is pretty huge. We decided to drive into one of the main campgrounds first, to find out the availability of camping in the park, get a map etc. We were advised that camping tonight shouldn't be a problem in most of the campgrounds, but Friday and Saturday night will be booked up already. That's fine for us as we are only intending on camping here one night.

We had a quick bite to eat for lunch and then drove out of this campground and entered the National Park from a different way, as the only way further into the park from this way was by hiking.

The entrance fee for the park was $15, which was fairly reasonable. From the entrance we took the main road through the National Park, heading south-east. There were plenty of areas to stop off and take pictures. The landscape here is amazing. It's a huge desert area with large rocks and boulders as well as, of course, plenty of Joshua Trees. The trees themselves are so unusual. They have really thick branches which twist in all directions. Upon closer inspection the leaves which come off it have serated edges and a sharp spike at the end - quite lethal looking. The Joshua Trees aside, the lanscape reminded us a lot of some areas of Australia, particularly western and central areas.

Along the first few miles of the National Park we saw some interesting wildlife like lizards, chipmunks, kangeroo rats and even a roadrunner! Sadly, the roadrunner was too fast for us to get a photo. Meeb meeb!

As we got further into the National Park, we spotted more lizards, a couple of Black-tailed jackrabbits, some Pinacate beetles and what we think to be a Scott's oriole (bird).

When we arrived at Hidden Valley near the centre of the National Park, we parked up the motorhome and decided to take the one mile loop walk through the hidden valley. The walk starts at a small picnic area and winds its way through some massive boulders and through an area which was once a cattle rustler's hideout. It was an impressive walk where we saw plenty of wildlife, trees etc. However, the loop was a little hard to follow as there were loads of other little trails leading off from it. So, less of a loop walk and more of a walk there and back. But it was still good. Although Stu constantly feeling the need to climb the boulders was a bit irritating. It looked so dangerous and I was convinced he was going to fall.

We continued our drive further into the National Park, and stopped along the way for more great photo opportunities. We noticed the daylight was beginning to fade, and Stu wanted to make it to a campground before sunset so he could get some pictures.

We headed to Jumbo Rocks campground as was fairly close by. Camping here was just $10, although no hookups here just some public toilets, but that's fine. We made it in time for sunset. Stu hiked out a little to get in amongst all the big boulders and got some great pictures. I was trailing along behind as the ever-faithful photographers assistant carrying the tripod. Stu got some amazing shots, it was well worth the time taken.

This evening I cooked up a 'spag bol' for dinner, then afterwards we headed out again for photos. It was obviously dark by this point, but Stu wanted to get some night shots. He took a few pictures of the stars, and the moon as it was looking really bright and it was a perfectly clear sky. I managed to spot a shooting star too, so was very pleased.

Stu also tried some experimental photography using a torch light. He would set up a long exposure shot on one of the joshua trees, or a boulder and then use the torch light as a paint brush to light up the whole object. It had some pretty impressive results.

He also used this technique to write things in the night too - some good, some extremely childish. Boys will be boys...

As we were taking some shots a family wandered by with their kids, taking them out for a nightime stroll. They stopped for a brief chat to see what we were doing. They also invited us over to their camp for pancakes and bacon. A very tempting offer, but we had not long eaten and I was looking forward to getting back into the motorhome and into the warm.

We had been out for an hour or so and it was quite chilly here in the evenings, so we wandered back to the motorhome. I went inside but Stu stayed out a little while longer to take sme more shots. I was happy to get in for a nice hot cup of tea.

It has been a great day. The Joshua Tree National Park was well worth the visit, a very special place.