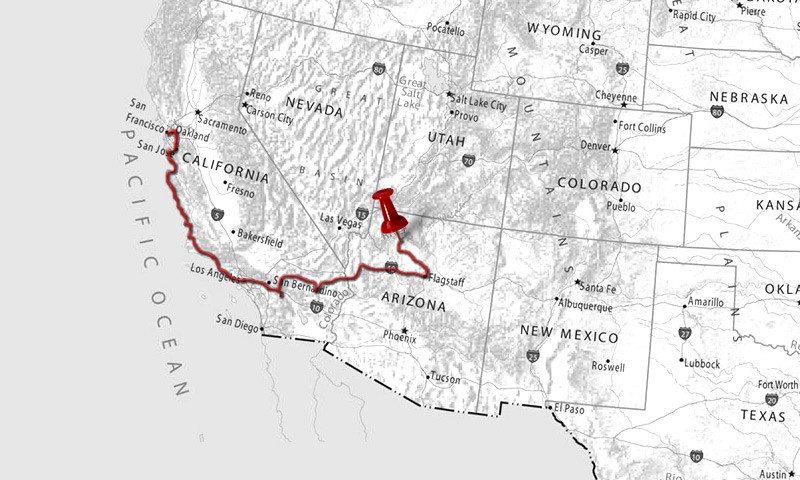 Yesterday we decided to stay another night at the RV park in Kingman, as Stu wanted to spend some time sorting his photos for the blog. We also needed to get some laundry done so it made sense to take a day off the road. It is nice to have a couple of days in one place so we can relax a bit.

This RV park is amongst the best we have come across in terms of being very clean and the lady who runs the place is really friendly. The only slight downside is that the trains make a bit of noise when they pass through the town as they sound their horn, but I guess you can't have everything.

After chatting with my brother (Mark) on skype briefly, I discovered that there was a surprise party being held back in Dartford for my mum's 60th birthday. Mark said we might be able to skype again when they are at the party, so we gave it a go. As it was a surprise party everyone was hiding in the kitchen at my aunt and uncle's house waiting for my mum and dad to arrive. Unfortunatley, just at the moment when the surprise happened our wireless internet died! Thankfully though it did return and I managed to say hello to my mum and wish her a happy birthday.

I spent a few hours getting the laundry done, while Stu did a bit of work. I don't think he expected to be doing too much work today as he had hoped to get his photos up to date. Unfortunately, there was a lot more work to do than he thought and he ended up doing this all day instead of the photos.

Today we left our nice RV park in Kingman and got back onto the freeway heading east, towards a place called Williams. There was nothing of particular interest in Williams, other than this being where we intended to join a different freeway heading north towards the Grand Canyon. We made a brief stop on the way just to have some lunch.

Once we got to Williams Stu remembered that he needed to buy a new hard drive - he wants to keep a back up of all the photos we have and has been running out of space since we were in Hawaii. Therefore, none of our photos from Hawaii onwards have been backed up. Losing them doesn't bear thinking about!

Despite having mentioned for the last few weeks that he wanted to get a new hard drive, he decides that while in the Arizona desert he wants to buy a new one now! Having already arrived in Williams it was clear we weren't going to be able to get one here, it is just a small town. Instead, we would have to take a bit of a detour further east towards a city called Flagstaff. This wasn't too much of a problem however, as Flagstaff was only around 30 miles away and we could get on a different freeway from there which would take us north up to the Grand Canyon. Plus, we were in no massive hurry today anyway.

After a bit of driving around Flagstaff looking for a computer shop, Stu dropped into a petrol station and looked through the yellow pages they had. He found a few, we plugged one into the sat nav and off we went.

The computer shop was just a couple of miles away, and when we arrived it was closed! Thankfully, there was another computer shop a few doors away which looked even better. Stu successfully purchased a new hard drive and also a device for charging the laptop in the cigarette lighter of the motorhome - so we can charge it while driving.

The hard drive debacle over with, we could continue our drive towards the Grand Canyon. We took the 180 freeway heading north. It actually worked out quite well that we went to Flagstaff, as the drive along the 180 freeway was very scenic. We could see a huge snow-capped mountain along side us for some of the journey. It seemed that we had entered a more alpine region here, as we had pine trees either side of the road and a few feet of snow beneath them. Thankfully the roads were clear though, but it was amazing how the climate seems to have changed so dramatically from the desert we had a few hours ago.

Flagstaff has an elevation of around 6,500 feet and this climbed to around 8,000 feet along the 180 freeway. I guess that explains the change in climate.

Of course, I am the only one doing the driving on our tour as Stu doesn't have a licence. I do really enjoy the driving though, so that is fine. The only slightly irritating thing I have found is that as I am driving, Stu is in charge of the music. He has a habit of putting his iPod on shuffle, which is great as you get a nice selection of different music. However, it seems that whenever a decent song comes on he has a habit of skipping it and then leaving on some dire track. One particular moment the other day he skipped a Beatles track and left on Bruce Springsteen! Unforgivable!

We arrived at a campsite just short of the actual Grand Canyon National Park entrance. It was about to get dark, so even if we drove up to the canyon now we probably wouldn't see much. Besides, this would be the last campsite before the canyon that had hookups for the motorhome and also free wifi, so we decided to stay here. We can set off for the canyon tomorrow first thing.

It's a good job we arrived here on a Sunday evening, as there are only a handfull of RVs in the campsite. I imagine if we were here on a Friday or Saturday it would be a very different story. As we drove up on the 180 we saw a lot of cars and RVs coming back the other way - a good sign for us that they were leaving after the weekend.

The campground is quite big, and we got a spot which gave us the best access to the wifi. Unfortunately, it means we are more of a walk from the shower block as a result but I guess that was the trade off. We thought we had it sorted, until a couple of hours later when the wifi decided to pack up! By this time the campground office was shut, so I guess we'll have no wifi until tomorrow morning - and still a long walk to the shower block.

Stu made a dash over to the General Store nearby to get some beef, and I cooked us up a stir fry. Then Stu could FINALLY get cracking on sorting his pictures. Hopefully we will be able to now upload a few more blog entries when the wifi is back up and running tomorrow.