A Little Bit Of Dust 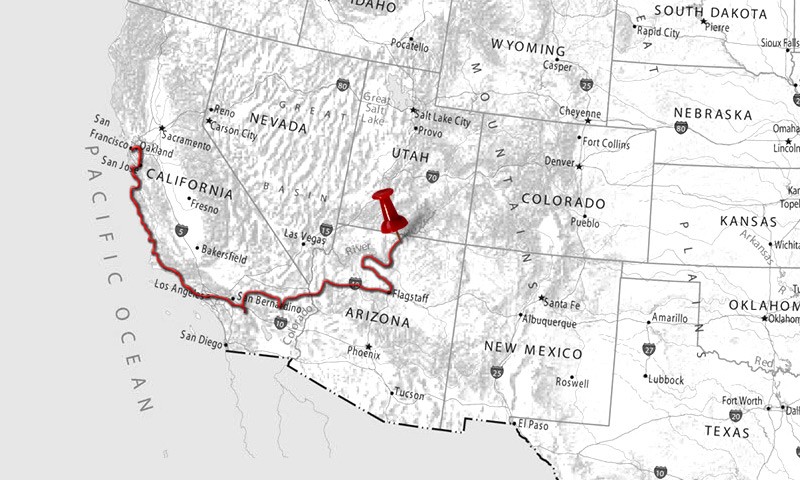 We both woke this morning feeling really tired. I didn't sleep too well last night. However, we had to press on as we had a tour booked for this morning at Antelope Canyon. We had to be at their offices for the tour at 11am, no later than 11:15am, as the tour departs at 11:30am.

In the process of getting ready this morning I wanted to empty the grey water out of our tank. This meant backing the motorhome up a little to line us up with the sewage outlet. Unfortunately I had left my door open as I moved the motorhome forward a little and forgot about the little post where the electric gets connected to. However, I was reminded about this little post when my door banged into it and promptly shut on me! This has left a little scuff mark on the door - I am hoping the rental people aren't too picky about this as it really is a tiny mark.

Anyway, on with the rest of the day. We left the campground about 10:45am as we had looked up the directions to where we needed to be for the tour on the sat nav, and it was only a ten minute drive. We followed the directions which took us to a shopping plaza where we parked up the motorhome and looked around. When Stu had booked the tour the guy on the phone had said their office was next door to Pizza Hut. We didn't see a Pizza Hut here, although there was a Pizzeria - could this be what he meant? I was sure he wouldn't have said Pizza Hut, unless he meant Pizza Hut.

We drove around this car park a little to see if we could see anything, but still no joy. Time was getting on and I was getting worried that we weren't going to find the place in time. At around 11:10am Stu popped into a shop to ask someone if they could help. It turned out the place we needed to be was the other side of town and not this way at all! This meant a mad dash to try and get there before 11:15am.

We arrived just after 11:15am but were relieved to see a queue of people hanging around checking in for the tour. It looked like we had just made it on time, because just after we checked in they started calling people over to board the tour buses.

We had booked onto the 'Photography Tour', and we were seated on the back of a four-wheeled drive truck - not disimilar to one we had been on in Vietnam for our tour of Coconut Island! Soon we were off, heading towards Antelope Canyon.

The first part of the journey was fine as it was by road but once we had reached the turning for the canyon, this is where the four-wheeled drive came into play. We were driving across pure sand, and it was quite a bumpy ride. With all the sensitive photography equipment that was in the back of this truck, I think we were all hoping to arrive fairly soon.

Once at the canyon we were given the usual instructions by our guide about sticking together etc. We walked to the entrance of the canyon which looks like a huge crack in the rock in front of us. Antelope Canyon is a slot canyon which is a narrow canyon, formed by the wear of water rushing through rock. It is significantly deeper than it is wide. This canyon is located on Navajo land and was formed by erosion of Navajo Sandstone primarily due to flash flooding and secondarily due to other sub-aerial processes. (This information I obtained from the internet as our guide, whilst helpful in guiding the group to certain photograph opportunities, didn't give us any information about the canyon whatsoever.)

Once inside the canyon it became clear just how narrow it was. The rock formation inside was amazing though. Over time the passageways are eroded away by water, making the corridors deeper and smoothing hard edges in such a way as to form characteristic 'flowing' shapes in the rock.Walking through the canyon was a great experience and we got to see some great rocks formations and great effects as the light beamed in through the narrow cracks at the top of the canyon. (Luckily, despite the cloudy day we did get some breaks of sunshine). The only real disappointment was the number of people inside the canyon at the same time. The passge is narrow, and because we were on a photography tour, obviously all the people in our group had tripods and wanted to take time and line up their shots etc. Unfortunately the tour groups are packed in, and there is the continuing issue of another group trying to squeeze past in the opposite direction, or people getting in the way of shots. This was quite frustrating for those taking pictures.

At one point, our group had been taken to the section of the canyon where a beam of lights breaks through the rocks onto the canyon floor, with some nice effects. This only happens at a certain point in the day and, being that we were on the photography tour, our guide took us straight there. After just a few minutes another guide comes through and tells us to hurry up and move on because other people want to see it. This was especially annoying as we had paid extra money to go on the photography tour specifically to line up these shots. Thankfully, for the last 35 minutes of our two hour tour we were allowed time by ourselves to go back through the canyon and take any photos we liked, and by this time most of the other tours had left. So Stu managed to take a bit more time to take more shots without the pressure to move on quickly, or worry about people getting in the way - well, not too often anyway.

One thing the tour guides liked to do was to throw sand up in the air for some of the shots, to help highlight some of the light beams coming down into the canyon. While this probably helped a little with the shots, I'm not sure all the photographers were too happy with all the extra sand blowing around - I know Stu wasn't.

So, all in all, I think we were both glad we did the tour as it was an amazing looking canyon. I think we both know it would have been a lot more enjoyable if there were less tour groups in there at the same time though, but still a cool place.

It was another bumpy ride back to the tour office. The wind had also picked up a bit so we were all covered in fine sand by the time we got back. Stu had to do some serious cleaning of his camera and equipment.

We headed over to Safeway afterwards to stock up on some groceries, and then drove over to Horseshoe Bend. We stopped in the car park first and had some late lunch before heading out on the hike to get to the attraction.

Horseshoe Bend is the name for a horseshoe-shaped meander of the Colorado River. You have to walk about three quarters of a mile from the car park to get to the edge, and walking through thick sand at points which makes it hard going, but it is well worth it. The view is simply stunning. The overlook is 4,200 feet above sea level and the Colorado River is at 3,200 feet above sea level making it a breathtaking 1,000 foot drop.

The wind had really picked up while we were here and we could see a storm cloud passing overhead. The wind blew sand and dust in your face when you tried looking over the edge, it felt like being sandblasted! It was worth putting up with though, we couldn't help but keep looking over to see the view below. Stu managed to get some nice shots set up with the tripod too, despite the strong gusts.

We took the walk back to the motorhome after we couldn't tolerate the sand gusts any longer - this was even harder as it was walking back uphill through the thick sand. Once back in the motorhome we discussed our plan for the rest of the day. We were considering starting our drive up to Monument Valley, however it was already 5pm and there didn't appear to be many RV parks along the way in case we wanted to stop. It would be a long drive and we were both feeling quite tired. We decided instead to stay another night in Page, at the same campground as last night, and head off first thing tomorrow. That way we get a restful evening, Stu gets plenty of time to sort through his photos and we can relax a bit. Another long drive was not appealing for tonight.

After hooking up the motorhome to the electric and water I headed off for a shower. Despite brushing off a lot of the sand from today I could still feel it on me. One shower later and I was feeling a lot better. I cooked us up a lovely beef stir fry (stir fry seems to be the favourite meal in the motorhome at the moment) and we settled in for the night.