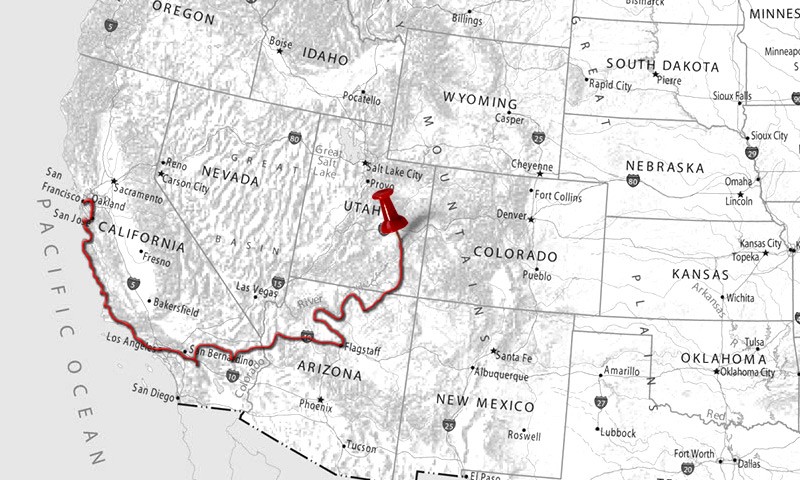 We decided not to dwell too much on the events of last night. Stu tried to contact his insurance company this morning but they were not available, I suppose because it is Saturday. He'll try again on Monday and we'll try and move on with things until then.

Our campsite in Bluff was another fine example of the campsites we have come across since leaving California. Unlike Australia, it seems the more remote we get, the cheaper the campsite but the better the facilities. The showers in this campsite were clean and hot, just what you need.

We left our campsite in Bluff this morning and continued our drive heading north into Utah. Today mostly consisted of driving actually, with some stop-offs along the way. The first of these stop-offs was towards Newspaper Rock. We saw the sign and took the turning, unsure exactly how long the road would be to take us there or what the rock would actually be like. After meandering along a winding road for about fifteen minutes we eventually came to 'Newspaper Rock'. It was basically a large rock with a flat side with some petroglyphs on it. Unfortunately, as detailed on the sign next to it, it isn't possible to date the markings on the rock (so for all we know they could have been done a couple of years ago) but supposedly they are markings from an ancient civilisation. There were some pictures we could make out like men on horseback, snakes, footprints etc. but some of it was harder to work out. I'm not really

sure if I was that impressed by it, simply because you don't know if it's authentic or not.

We took another fifteen minute drive to take us back to the main road again and continue with our drive heading north. Another stop-off pointed towards 'Looking Glass Rock'. When we made the turn it looked to be a gravel road heading up a hill. It's not really a good idea for us to be driving on unpaved roads due to this being a rented motorhome. I think doing so would invalidate our insurance should something happen. We decided to drive up to the hilltop to see how far it was from there. At the top we could see that the road condition deteriorated even further, and we couldn't see Looking Glass Rock anywhere close by so decided to turn back for the main road again. It might have been worth the visit, we'll never know, but after the 'camera incident' yesterday we decided that good luck may not be on our side and we were better off not chancing it.

We drove past some impressive looking rocks along the way to the next stop-off, Wilson Arch. This is a natural sandstone arch which has a span of 91 feet and height of 46 feet. The elevation of Wilson Arch is about 6150 feet. Apparently the arch is caused by cracks and folds of the layers of rock being saturated with water, then ice forming in the fissures and melting under extreme desert heat, and winds cleaning out the loose particles. A series of free-standing fins remained. Wind and water attacked these fins until cementing material gave way and chunks of rock tumbled out. Wilson Arch managed to survive this but lost it's middle section. Therefore, what now stands at the top of a slanted rock face is an impressive looking arch in the rock.

Stu and I climbed up the slope, and Stu managed to get right to the top. I was happy admiring from a little further down.

The next likely stop-off according to our map was the Hole In The Rock. I drove a bit slower to make sure I didn't miss the turn off, as they are not always signposted very well. (Wilson Arch was just signed as a 'Rest Area' with a picture of a camera next to it). However, I needn't have worried as they have painted the name 'Hole N'' The Rock' on the side of the actual rock in six foot high white letters! What I thought would be another impressive natural rock formation - wasn't! Instead, it was a home and gift shop which had been carved out of the rock. The story behind the place starts with a couple called Albert and Gladys Christensen. They first created a small alcove for the young Christensen boys to sleep in at night, but this grew into a man-made home containing 14 rooms, fireplace and bath all carved out of the rock. Whilst it was easy to appreciate the effort that had gone into making the place habitable, it was a shame that it had now turned into quite a tacky place. You enter via the gift shop where you can go on a guided tour of the house, but this cost $5 each and we weren't really that interested. The gift shop itself contains the usual sorts of things - magnets, calendars, oh and postcards of Jesus!

Outside around the house it gets worse. They have all manner of weird structures, signs and displays outside - to be honest they are quite hard to describe. Suffice to say that it all looks incredibly gimmicky. There is a sign pointing to Bigfoot which leads you all the way around a shed, to what is just an actual large foot - hilarious, I'm sure you can imagine.

They also had a mini zoo there (?), a General Store and what seemed to just be junk - although there was the odd piece of impressive metal/art sculpture (a golfer made entirely out of golf clubs, was pretty cool). The other interesting thing was seeing how some birds had made nests in some of the holes on the side of the rock. But, that was where our interest ended really and we got back in the motorhome and continued driving.

Our drive along the highway 191 eventually brought us to a town called Moab. It didn't look of particular interest as a town, but we had driven quite a lot today and it made sense to get some food shopping done and then find a place to stay for the night. Besides, this town is where the Arches National Park is located and we can visit this tomorrow when we have a full day ahead of us.

There were plenty of choices of RV parks here, so we picked one with free wi-fi and found ourselves a site. Stu cooked some delicious fajitas for dinner, and we settled here for the night.

Additionally, for those not yet aware, we have made an important decision today. Over the last few days we have been discussing the subject of Stu's business, which he currently runs jointly with Valere in the UK. He started this business before we left the UK, and the idea was that it would be launched and hopefully not need too much more work done on it. However, whilst we have been on our travels it seems that the business requires a lot more of Stu's attention than he originally anticipated, which isn't very practical considering we are currently travelling on the road in the USA. So, in order for Stu to concentrate on giving his business the best opportunity of success, we have decided to come back to the UK after our tour of the USA is finished (around 1st

May, flight to be confirmed). This doesn't mean we have cancelled our planned travel in Canada, but merely postponed it until another time. It is a shame we have to put it off for now, but after all Stu and Valere's hard work on their business it would be a shame if they didn't give it a proper go, and try and make it a real success. Besides, Canada will still be there when we return.

In the meantime though we want to make the most of the travel time we have left, but we do look forward to seeing everyone very soon.