All Gone A Bit Sideways 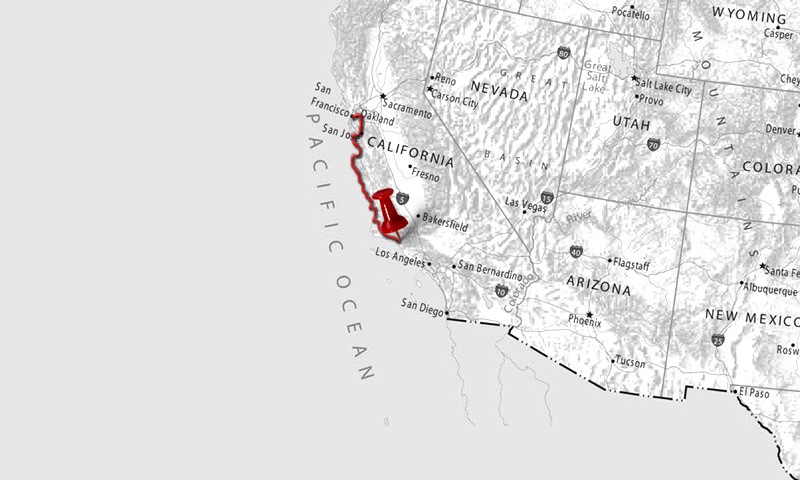 Stu called his old work mate Adrian today. He lives in LA and decided to come and meet us in Buellton, which is where we were heading to stay for the night. This is the heart of wine country here, and being that Adrian likes his wine too he decided to come up and stay at one of the cottages at the same campsite as us in Buellton, then show us around here. We made a reservation at the campsite before leaving Santa Maria. To have a site with full hookups it was over $60, so we opted for a non-hookup site for $27 instead. I cannot understand why some of these campsites are so expensive.

We didn't make any stops along the way from Santa Maria to Buellton, as we wanted to get to the campsite and hang around for Adrian to turn up. We weren't sure what time he would be getting there, so once in the campsite we were happy to chill out for a while. We started to watch the film Shutter Island, which Stu has on his laptop. About midway through we had a knock on our door and Adrian had arrived. We would save the rest of the film for later.

While we still had some daylight left, albeit a little dull and cloudy, Adrian suggested a drive around town to have a little look around. He had hired a car to drive up from LA so it made sense for him to drive us around.

We drove along to a town called Solvang, a really unusual but pretty little place. It's bizarre as the whole place is in a Danish style and it doesn't feel like you are in the US at all. There are loads of hotels and restaurants with windmills outside, really strange. We took a brief walk through one of the streets which had a farmers market on, with some great looking fruits and vegetables. Then as the rain began to fall we darted into one of the wine tasting places here that Adrian recommended.

Unfortunately, the actual wine he wanted to taste was not available, but the desk opposite in the same building was serving, so we gave that a try. It cost $10 to try a few of the wines here, so Stu and I just shared a tasting. The girl was extremely chatty but very friendly, and the wines were good too. Adrian and ourselves both came out with a bottle.

As the weather had got a lot wetter we decided to head back to Adrian's cottage. He had brought a couple of bottles of wine along with him from home, so we cracked open a couple. As this area is also where they filmed a large part of the film Sideways (good film, worth checking out) the campsite office actually rents out the DVD, so Adrian popped over to get it. We had seen it before a long time ago, but Adrian thought it might be good to watch again so the places in it would be recognisable when we see them again.

Adrian had booked us a table for dinner at 8:15pm so we had to leave the remainder of the film until later and grabbed a taxi to the restaurant. He had booked us in at the Hitching Post, a restaurant featured in Sideways and which boasts as having the best BBQ steak in the world. Adrian could testify to it too.

Despite only ordering a steak, you get a lot of extras with it. The meal comes with an entree of either soup or shrimp cocktail, then there is a salad with a choice of dressings, then there is garlic bread, then you get your steak. Had I realised there would be so much food I probably wouldn't have ordered the 12oz filet mignon steak and gone for a smaller one! The waitress did say "...and that's for you?" when I ordered which should have been the clue.

The shrimp cocktail was so retro but very nice, the salad was great too. However, the steak was simply beautiful. Probably the best filet steak I have ever had, it was just melt in the mouth. As predicted by everyone I didn't manage to eat all of my steak, but they kindly wrapped it up in a box for me to take away and have later.

After our meal we got a taxi back to the campsite and headed for Adrian's cottage to watch the remainder of the film. Then we decided to call it a night. A lot of wine and meat had been consumed, and as we were planning on doing some wine tasting tomorrow we had to get to bed. We wished Adrian a good night and headed back to our motorhome.