A Nice Bit Of Exercise 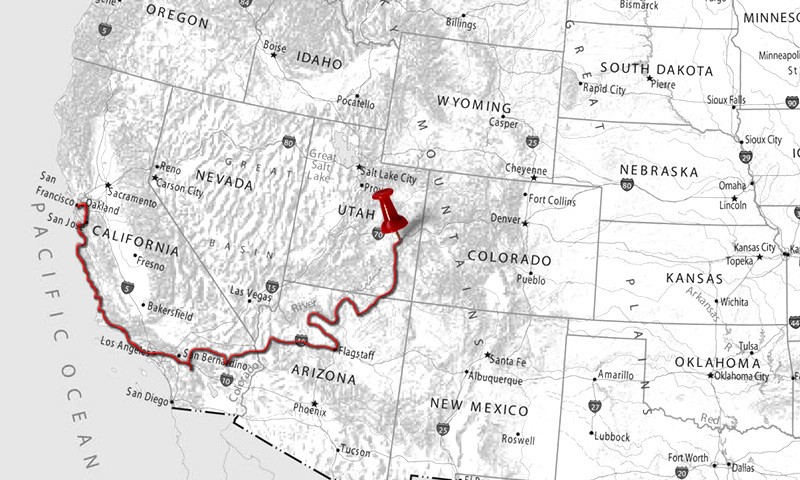 Contrary to what I was saying yesterday about the campsite showers getting nicer the more remote the campsite we stay in, today was an exception. They were not especially clean, and there was only one shower in our block so I had to wait for someone else to finish their shower first.

We didn't have to drive away too far as the entrance to the Arches National Park was just a couple of miles further down the road, and that was our destination for today.

The Arches National Park contains one of the world's greatest densities of natural arches - over 2,000. The park lies on top of an underground salt bed, which was deposited across the Colorado Plateau 300 million years ago after a sea flowed in the region, but was evaporated. over the course of millions of years residue from floods, winds and the oceans covered the salt bed, and the debris was compressed as rock. As the salt layer shifted and buckled the rock layers were thrust upwards as domes, and whole sections fell into the cavities. Faults caused the vertical cracks and contributed to the formation of the arches, along with water seeping into cracks and freezing, thus expanding and pressurising the rock to break. Wind and water continued to attack until the rock fell away and left the arches as they appear today.

Upon entering the National Park we paid our $10 entry and were given a map of the whole park. It appeared to be easy to get around. It was simply a case of driving round the relevant lookouts or trail heads, and then walking along to the arches. Some of the trails were longer than others, and we thought we would do what we can.

There were several good lookout points at the start of our drive through the park, including a good view towards the snow-capped La Sal Mountains about 20 miles away. After this we came to Balanced Rock where we could get out and have a walk along the trail. The rock looks very impressive, and as you might expect from the name it looks to be a large rock balanced upon a smaller stack. However, in reality it is not actually balanced as such, it is simply where the rock at the top is more robust and has not worn away as quickly as the rock supporting it.

There was a drive from here heading toward an area known as The Windows. Here we could take a few different trails to take us past soome of the arches known as the North Window, South Window and Turret Arch.

After another good walk we drove straight up to the top area of the park, taking some more walking trails. One of these trails was to the widest arch in the whole of the National Park, called Landscape Arch, which is 306 feet from base to base. It was an impressive sight. A sign close by described how in 1991 a 60 feet long slab of rock fell from Landscape Arch, leaving behind an even thinner ribbon of rock making up the arch. Apparently, some people were underneath the arch when they could hear what they thought was thunder. Then they spotted some small stones falling from the arch and quickly ran out of the way, just in time before the slab of rock fell. Understandably, the walking trail now stops in front of the arch and no longer allows people to walk underneath it.

We saw some other impressive rock formations and arches along this trail too.

Another thing I also spotted (and I always make a point of keeping an eye out for) were some interesting choices of shoes that people have. Whenever we take walks somewhere I am always amazed by the inappropriate shoe choices people make. Not to be racist here at all, but quite often it seems to be Japanese women who generally wear the most inappropriate shoes. When we have been trudging along dirt tracks in National Parks in our hiking boots, we have often seen them tottering along in their heeled shoes. Today I saw a Japanese woman walking down a dirt track, which has some vertical sections of rock to navigate, in flat soled leather boots (despite the National Park leaflet explicitly saying not to wear this type of shoe). This was beaten however by two young girls wearing flip-flops and climbing up a steep incline to stand under one of the massive arches. Then another person wearing no shoes at all!

We walked back to the motorhome and started to drive back down through the park, stopping at places we had missed on the way going up. We wanted to find somewhere good for sunset, just incase there was a slim chance that there was a break in the clouds and we might get to see the sun setting. We drove back to Balanced Rock to view it here. I made us a cup of tea while we waited to see what happened with the sun. Unfortunately, there wasn't really a good sunset at all, but Stu ventured out anyway. I stayed in the motorhome to stay warm and finish the rest of my tea.

It just started to get dark by the time we bgan to drive out of the Arches National Park. It had been a good day, but we both felt quite tired as we had done a serious amount of walking today.

We didn't really want to stay at the same campsite again tonight and thought we would give another one a try - there are quite a few to choose from in Moab. We tried one but it was charging $40 a night, so we continued on to find one that was about $10 cheaper. They are quite strict on checkout times here though. We were given a card to use at the barrier when we leave tomorrow morning. Apparently, if we use it anytime after 11am we are automatically charged for another day! How lenient of them!

Stu cooked up a lovely stir fry tonight for dinner while I got blogging. An early night for me I think, I'm exhausted!