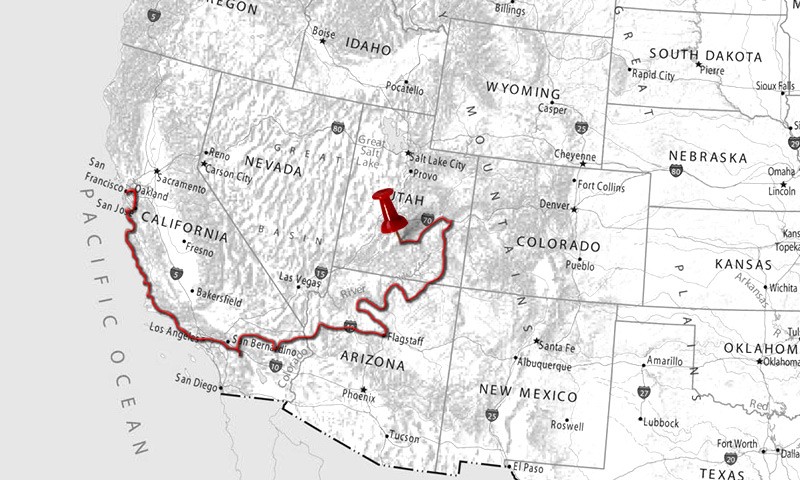 We awoke to a cold, but sunny morning (we are so glad this motorhome has heating otherwise we would have never survived the night!). When Stu ventured outside to see if the campsite office had opened, he was met by the owner who advised him that the campsite is actually shut. Apparently, they aren't due to open until April because they close for the winter (that would explain why the water wasn't working and the showers were shut last night). The owner was fine about it though and said we could just pay him $20, which was fine with us.

After leaving the campsite we started our drive heading towards Bryce Canyon National Park. It was still a fair distance away, but it was a pleasant enough drive and there were some nice mountains along the way.

Just before coming to Bryce Canyon we drove through Red Canyon. We could park up the car and walk up a little trail to get some close up views of some interesting rock formations. They were bright red in colour, and pretty cool.

When we finally entered Bryce Canyon National Park it was getting late into the afternoon. Stu popped into the Visitor Centre to find out a bit of information about the park and the trails.

As recommended in the leaflet given to us upon entering the park, we first drove to south end of the park and then came back up stopping at lookouts on the way. It recommended this in the leaflet because all of the lookouts are on the east side of the road, so this would avoid having to keep crossing oncoming traffic. However, it was also recommended by the ranger in the Visitor Centre as today is supposed to be the last day of good weather for a while. Tomorrow there is supposed to be snow, which means they will probably close the south section of the park. The following day it is supposed to be a thunderstorm too.

As the day was getting on we decided to waste no time and drove right to the south end of the park. We then swiftly made our way back up through the park, stopping at each lookout along the way. Luckily, most of the lookouts are right next to the road so we could park up and get to see them really easily. They were pretty amazing sights. Bryce Canyon isn't as overwhelming and certainly not as big as the Grand Canyon, but it is still very impressive and an awesome sight. (In fact, truth be told it isn't actually a canyon at all but a naturally occurring amphitheatre). Of particular interest at Bryce Canyon are the hoodoos, which are the pillars of rock formed by the wind, water and ice erosion of the river and lake bed sedimentary rocks. The colours of the hoodoos range from deep red in colour through to orange and white colours and are a really amazing sight.

As we were stopping at the lookouts in order, you tend to keep bumping into the same people. There was a nice old couple that we were driving behind when we stopped at the first couple of lookouts. The woman joked that we were following her, and she seemed nice enough. As we looked out across the wonderful sight of Bryce Canyon we chatted a little, and then she commented "God created some beautiful things for us to see, didn't he?". Despite what we wanted to say in reply, I think Stu and I mumbled a sort of "Hmmmm... yeah" and made a swift exit to the next lookout.

By the time sunset was coming around we had, fortunately, just made it to 'Sunset Point' lookout. Because the sun had dropped it was beginning to feel incredibly cold - made even worse by a biting wind which had really picked up pace now. We stayed here for a little while and then decided to go on to the next lookout to see if that was any better - Bryce Point. We decided to stay here for the rest of the sunset.

I wasn't sure we would last the half hour or so until the sun would go down, but somehow we did. I was tempted to dart back into the motorhome and let Stu suffer the cold on his own, but I stayed with him until the end. That's loyalty!

Feeling very cold after sunset we were at odds about where would stay for the night. Stu wanted to try the campground within the park, but this would mean no hookups and no shower block (although apparently we could use showers near the Visitor Centre). I didn't fancy this and wanted to try and find an RV park somewhere outside the park which would have hookups. After a look around the campground in the park I wasn't too impressed. So we took a drive out of the park only to discover the nearest RV park was shut - seemingly because of the winter.

At this point Stu came up with an alternative plan. He suggested we drive to the Best Western Hotel just outside the park, book ourselves a room for the night there and have dinner in their restaurant, as a bit of a treat. It didn't take much to persuade me so we drove straight to the hotel. While Stu checked us in I threw a few things into a bag.

It turned out that Stu had booked us a king room, with an in-room jacuzzi! It was a pretty impressive room, very spacious and with a nice big jacuzzi. This was just what we needed after standing out in the freezing cold. However, as it was around 8:30pm we really needed to get some food. We headed down to the restaurant where we both opted for a steak, following by a gut-busting dessert. Then headed back to the room for a well earned jacuzzi bath. This was such a good idea!

The room also had a hairdryer - a little luxury that I have not had since we were in Hawaii!