In Amongst The Hoodoos 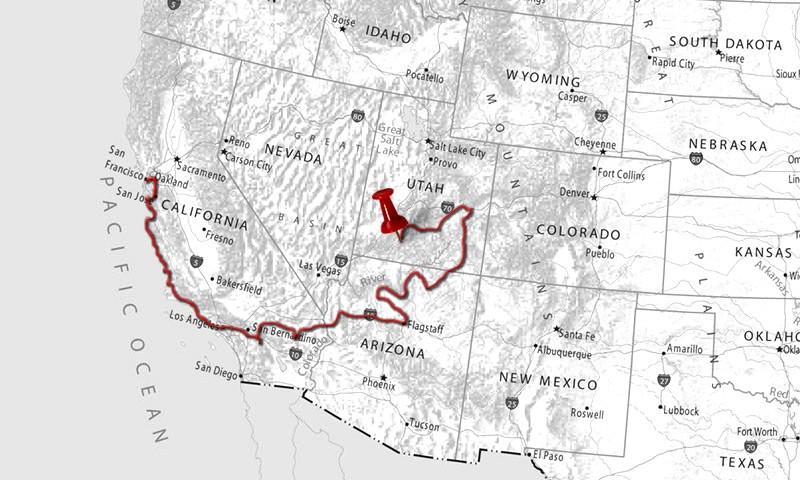 We had been warned that today it was supposed to snow. It appeared to have already settled before we were awake, as when I opened the curtains this morning I saw that a blanket of snow had been left on the cars outside. Fortunately though, it hadn't been a great deal of snow - perhaps an inch - so we should still be ok to drive through the park today.

We both felt quite refreshed after sleeping in a proper bed last night. It was certainly money well spent. We just had to check out at 11am and return to the motorhome.

Stu had a couple of errands to run this morning to do with his company, and then we were driving back towards Bryce Canyon once again.

First we decided to go straight to Bryce Point again. When we were here at sunset yesterday some of the hoodoos were in the shade, so we thought it would be worth seeing them again in the light of day today so Stu could get some good photos of them. We noticed as we turned into the road leading to Bryce Point that the rest of the road heading south in the park was closed due to the snow fall. We were both really glad that we had already seen this end of the park yesterday.

The hoodoos at Bryce Point looked really great in the bright daytime and it looked nice the way the snow had settled on them. In fact, the white of the snow makes a really impressive contrast against the redness of the rock - it looked really beautiful.

After seeing Bryce Point again we continued to view some of the other lookouts that we had not seen yesterday. The snow had made some of the walkways to the lookouts a bit icy and sludgy in places, but we could still get to them with a little extra effort.

After a late lunch we decided to try one of the trails leading down into the canyon. Due to the snow and ice we didn't want to try anything too long or strenuous as the conditions would just make it even harder. We opted for the easy trail called Queens Gardens, leading from Sunrise Point.

The trail started off easy enough, and it was amazing to actually be level with the hoodoos. The path did start to become extremely muddy though, and quite sticky in places. I sometimes struggled to get my foot back out of the mud after stepping in it! I guess it just made the walk a bit more interesting. Also interesting was some of the footwear choices of other people we saw on the trail. Most people had sensibly worn hiking boots of some description. However, there were the odd few who were wearing trainers - some of which had no grip whatsoever. I don't know what they were thinking, walking on a downhill trail in mud, snow and ice in anything but hiking boots!

There were some fantastic views as we descended into the canyon. The covering of snow making the canyon look incredibly striking. It was an awesome sight.

Stu kept darting off the trail and walking down other areas where he spotted good places to take photos. Whilst he probably got some great shots, it meant that he was exerting himself a lot more than I was. Each time he went downhill off the trail, he then had to walk back up. This combined with the fact that we are at an elevation of between 8,000 and 9,000 feet meant that he got tired quite quickly.

In fairness, we had probably made it almost to the end of the trail anyway as it wasn't incredibly long, but Stu decided that he didn't want to continue right to the end as he was feeling tired and a little short of breath. We had learnt at Mauna Kea in Hawaii that Stu doesn't cope too well with high elevations, so we decided to turn back a little early and make our ascent back to the top. I even offered to carry Stu's camera gear for him just to make it a bit easier. I think he was more than a little relieved once we got to the top again.

Our boots were covered in sticky mud after walking the trail, so we spent a good fifteen minutes or so trying to wash it off by walking in the snow and banging our boots against the floor. I think we managed to get most of it off, but they will still need a proper wash at some point.

Feeling very tired Stu suggested another night at the Best Western Hotel. Once again I didn't need much persuasion, so we checked ourselves in for another night - even managing to get the same room again.

First things first, we ran ourselves a jacuzzi in the room. We had plenty more time than we did last night so we decided to watch Black Swan on pay-per-view while enjoying the jacuzzi. It was a good film too!

After a quick shower we headed down to the restaurant again for a good feed, then back up to the room to catch up with some blogging, photo sorting etc.

It has been another trip highlight seeing Bryce Canyon. Next stop, Zion National Park.