Too Tired To Enjoy It All 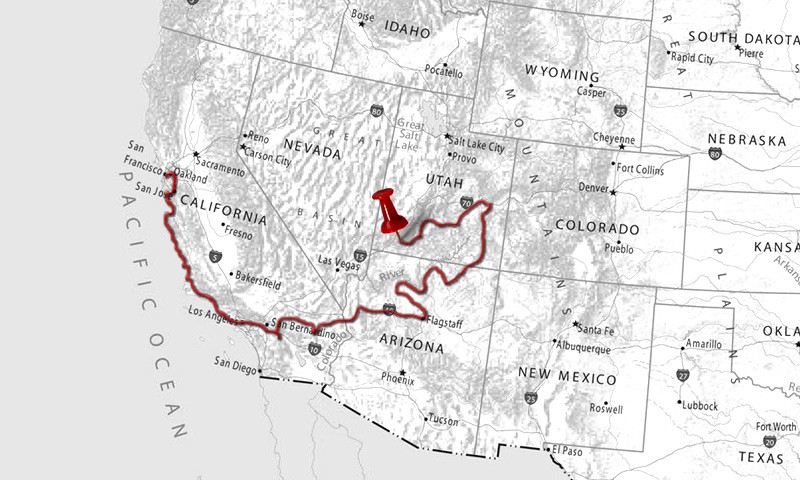 Despite another night staying in the comfort of a kingsize hotel room, neither of us had a particularly good sleep last night. We think it could be due to the altitude - giving us both a headache this morning. We may also be a bit dehydrated perhaps - who knows? We still had to struggle on with the day though.

After checking out of the hotel we decided to pay a visit to Mossy Cove. This was a place recommended to us by one of the rangers at the Visitor Centre at Bryce Canyon, due to the frozen waterfall. It was only a few miles out of our way so wouldn't take long. Stu was really not liking the high altitude still, and was half considering not bothering with Mossy Cove at all. We decided we would drive to it and see how far we would have to walk.

Once we had parked up, the sign about Mossy Cove said it was 0.4 miles one way. We decided this was ok and started our walk. The weather at this moment was snowing lightly. The ground looked really muddy, but fortunately because of the freezing temperatures it was actually pretty solid and not at all sludgy. If we had come here yesterday afternoon I am sure it would have been really sludgy, just like the trail into the canyon was yesterday.

It was a fairly easy walk up to Mossy Cove, with just one section that was a bit icy and required the assistance of some sturdy looking branches on one side to help us up the incline.

Once at Mossy Cove it was really impressive. As you would expect it was a cove in the side of the rock. Where water flows down the overhang and through the rock and had frozen, it had formed some small icicles hanging from the top. Also, where the water had been dripping down it had formed huge columns of ice attached to the cove floor - almost like icy stalagmites. It looked pretty cool.

After this we walked over to find the waterfall, which unfortunately was not frozen - I guess it just wasn't quite cold enough today. It was still nice to see, all the same. By this time some of the blanket cloud had actually cleared, the snow had stopped and we even had a bit of sun coming through. This made for some nice pictures when walking back down towards the car park, as the sunlight lit up the hoodoos around us.

Sadly, that was to be the last of the sun we would see for a while. After leaving Mossy Cove we started our drive towards Zion National Park. Practically the whole of our drive today was accompanied by snow, then sleet, then rain - heavy in places. Thankfully, we were also leaving the high elevation of Bryce Canyon behind and made a steady decent all the way towards Zion.

Once we arrived at Zion National Park it was easy to see why it was such a popular place. The canyon inside the park is really impressive. It was just a bit of shame about the weather. Sometimes it was ok, then every once in a while it would hammer down with rain or sleet. We took it in our stride however and took a drive throng the park.

Firstly you drive through a long tunnel, which then brings you out on the road through the canyon. You can drive the whole road system through the canyon in the winter months in your own vehicle. In summer they have a shuttle bus for the north route.

We were both feeling extremely tired by this point due to lack of sleep, so decided to take a drive through the park along the scenic drive, then return and find a campsite to get some rest. Stu was able to take some photos despite the rain, but I think the novelty was wearing off a little due to tiredness.

It seemed a shame to get to a campsite so early in the day, especially when Zion National Park seemed so attractive. However, we were in dire need of rest and we just weren't enjoying it as much as we could have been.

We got to see some nice sights along the way. A couple of particularly impressive waterfalls - Weeping Rock and Temple of Sinawava. But I think we both realised we would appreciate them a lot more tomorrow after having a good night's sleep, and hopefully having some better weather.

We drove back south through the park and just outside of the south-west entrance to the National Park, where there was an RV park. We got a pitch here and despite it only being about 4:30pm, we wasted no time in setting up the bed in the motorhome and having a nap.

By the time we woke up and hour or so later the weather had cleared up a little. There was even some sun shining through and creating some nice colours on the rock around us.

I made us a hearty spaghetti bolognese for dinner, and we settled in for an early night to recharge the batteries ready for another look at Zion National Park tomorrow.