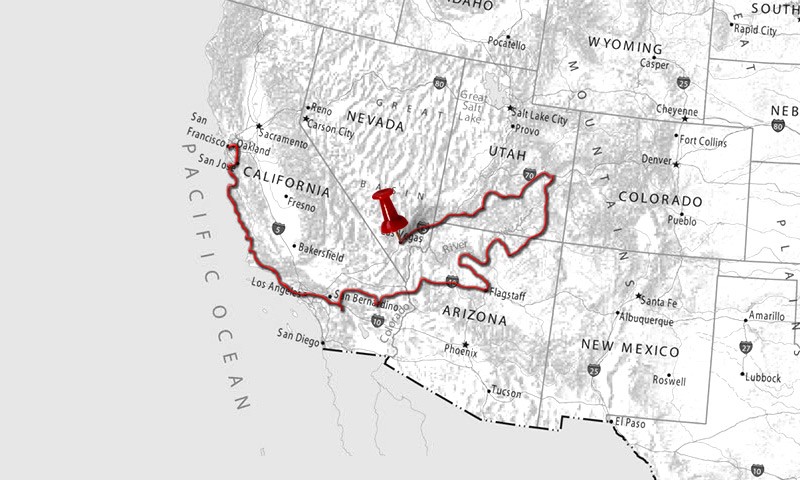 This morning started off well with some dry weather, but it wasn't destined to last. By the time we were ready to leave the RV park and venture back into Zion National Park for a second time, the rain had started. However, we were feeling a lot better today and in much better moods, so we decided to take the scenic drive through the park once again.

We made a few stops along the way to take some pictures. I think Stu was quite annoyed that the weather was bad again for a second day because it meant he wouldn't get the great pictures he had hoped. Despite this we tried to make the best of it. In fairness, because of the bad weather it created an eery mist around some of the rocks and mountains which looked pretty cool.

The weather seemed to flip from being hard rain, to sleet and then to snow. This didn't deter me though even if it did Stu. He ventured out the motorhome a couple of times to take pictures, but was reluctant to walk too far. I ventured out to take some pictures with our little digital camera at Emerald Pools but I doubt the pictures were that good.

I think if the weather had been better at Zion we would have ventured out more and attempted some of the trails. However, with the constant sleet, snow and rain I doubt it would have been very enjoyable, and possibly even a bit dangerous. Still, we are glad we got to see the national park as it was still a really impressive sight.

As the weather didn't appear to be letting up, we decided to leave Zion National Park today and drive straight to Las Vegas. Whilst the wet weather stayed with us for a while we soon managed to escape it and get some blue sky and sunshine. There was some impressive mountain scenery as we drove back into the state of Arizona. Then as we entered Nevada the good weather really came along as we turned off the heating in the motorhome and instead put on the cool air.

We had been driving through the Nevada desert for about an hour or so, not seeing very much apart from the other cars on the road. Then we suddenly saw the skyscrapers of Las Vegas in the distance. It's bizarre because it looks like it shouldn't really be here - but it is.

We drove straight towards the strip in Las Vegas, which took us past some of the famous hotels. The first notable one was the Stratosphere which is a massive tower with roller coaster rides right at the top. We also passed Caesars Palace, Treasure Island, Planet Hollywood, The Mirage, Casino Royale - to name but a few. Las Vegas is somewhere that I have never been too keen to visit, it never really appealed to me. The main reason we came here is because Stu wanted to come here to play poker, and I guess I was a bit curious to see what it was like. The hotels here are massive and quite impressive, but the place is pretty much as I expected really. It's like Disneyland, but with gambling.

Stu decided he wanted to stay at The Bellagio hotel after reading online that it was supposed to be a really good hotel. We drove up to the hotel and managed to park up temporarily while Stu sorted out a room for us, as we hadn't yet made a reservation. It made sense to stay in a hotel while in Las Vegas.

Stu managed to book us in for three nights at The Bellagio, so we packed up a few bits into a bag and parked our motorhome round the back of the hotel. We had to get a valet escort to park us round the back, as they aren't used to having RV vehicles parking in their grounds. We had our own little parking space next to the security area, so I guess it will be pretty safe.

I don't think I realised just how big these hotels were until we had to find our way through the lobby and towards the elevators to get to our room. There were hoards of people everywhere. We had declined the offer of help with our bags as we thought we would be able to get the elevator in the lobby. No, we had to walk quite a bit further than that.

Eventually, after walking all the way through the hotel (and going the wrong way a couple of times - thanks to Stu) we found our way up to our room on the 12th floor. It's a nice room, as you would expect. It's pretty spacious and of course very clean and tidy. The bathroom is great with a large walk-in shower, and I am very pleased about having a hairdryer again.

One interesting point is the mini bar. Stu was advised that everything inside the mini bar has a motion sensor - so basically if you move it, you pay for it.

Just after we got in our room we had a knock on the door. It was housekeeping asking if we wanted them to fold down the bed for us. I know they like to do this but I always find it a bit weird that we would need someone to come in and fold down our sheets for us, especially while we are actually in the room. I said she didn't need to, but we got a handful of chocolates anyway.

We both relaxed for a while in the hotel, and then decided to venture downstairs for a bite to eat. There are plenty of restaurants at The Bellagio to choose from, but I think we had both decided on the restaurant which served Vietnamese food called Noodles.

After a short wait to be seated we soon got our table and ordered. We both ordered a starter and a main course, and it was ok. To be honest though, I have probably had better takeaway food (and paid a lot less for it).

After dinner we took a walk through the casino area. I thought I could smell cigarette smoke, and it turns out I was right. I guess you can smoke anywhere here. You can also drink anywhere - you'll see people walking around any time of day with a beer in their hand.

The casino area is pretty huge, filled with numerous rows of games machines, various card tables etc. It was interesting to see it on such a large scale, but I have to say that I wasn't really tempted to play at all. It all looked a bit sad really - lots of people at the slot machines sitting there on their own wasting their lives away.

It's an interesting mix of people here too. You see some people who are really dressed up (some might say, over dressed), and then you see other people walking around in jogging bottoms and sweaters. It's quite odd. Then you get people with their whole family, pushing prams and taking their kids through the casino - that just seems wrong to me.

We walked over to the poker room and watched a few of the tables. Some of them are quite expensive to join - you can pay thousands of dollars just to join the game.

We wandered outside briefly as they had the water fountain display going on outside. People watch open-mouthed as jets of water are spurted into the air in unison, in time to the music. I guess it looks ok, but I found myself think "It's just water". I suppose like any hotel, The Bellagio needs something as its big attraction, and the water display is it.

Once back inside Stu decided he wanted to give one of the poker tables a go. Unfortunately, the poker area is about the only game which doesn't really have room for spectators. So I left Stu there and came back to the hotel room.

I think I was only back in the room for about half an hour, when I heard Stu coming back. It seems his first venture into poker in Las Vegas was not very successful. (That was a quick $100!) Oh well, tomorrow is another day.