A Long Road Back To California 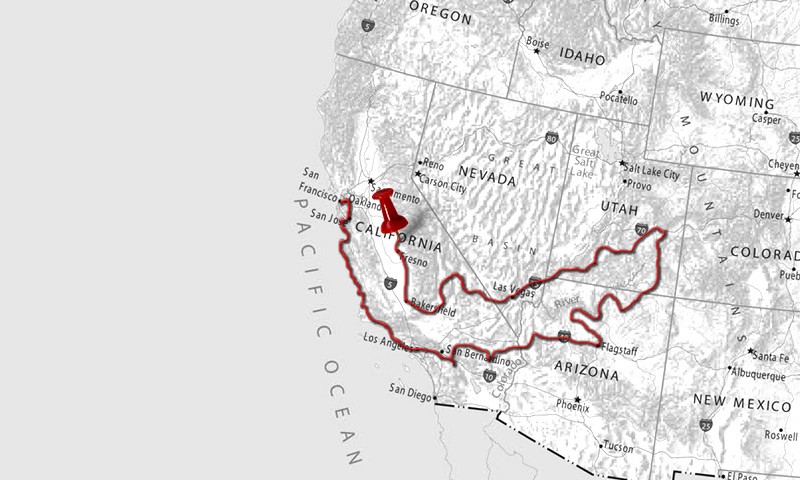 Last night at the campsite in Death Valley I fell asleep looking at the stars above out of our window. The view of the night sky was perfect last night, and with hardly any light pollution around it was a gloriously clear sky. Despite being very tired I could hardly close my eyes and look away from it - truly stunning. With the exception of Mauna Kea, our best views of the night sky have been in the desert.

This morning we awoke to a very hot start to the day, and a bit of disappointment that our battery which powers the fridge had gone flat! I guess not plugging into any electric hookup since before we got to Las Vegas was the culprit here. Thankfully the power must have only recently died as the fridge contents were still fairly cold. We knew that once we started driving again this should recharge things enough until we get to our next RV park, so long as we get an electric hookup this time.

We left Death Valley this morning and headed south first, then west, then north. We needed to start heading north but the Sierra Mountains are in our way and prevent us going directly north. We effectively had to drive south to get round the bottom edge of the mountains, then drive up the other side of them. It makes for quite a lot of driving compared to 'as the crow flies' but it was an impressive drive leaving Death Valley.

Upon leaving the campsite we first ascended a few thousand feet on the drive, before dropping more or less to sea level again, before then ascending once again. All this through winding and dipping roads, past incredible mountains scenery was pretty impressive.

As we drove past the Sierra Mountains, these were impressive too. They go on for miles - like a huge barrier in our path (which is why we have to drive for so many miles around them) - and it's amazing to see so much snow on top of the mountains, and yet the weather outside for us is incredibly hot. It must be somewhere in the 30s again today.

We decided to drive most of the way to Yosemite National Park today. We will need to check what the current conditions are like in the park before going in, but decided that we might as well use today to cover a bit of distance with the driving - as we will need to return the motorhome to San Francisco in a few days.

We made one major stop along the way at Tehachapi. It wasn't to see anything but to grab a bite to eat. We made our own lunch in the motorhome, but parked up outside McDonalds so that we could use the free wifi there (Stu had to sort out some work stuff). It also meant I could have a quick chat with my Mum, who happened to be online.

Once all the Internet stuff was sorted Stu popped into McDonalds to treat us both to an M&Ms McFlurry ice cream. It was quite nice, but 740 calories later we were feeling quite full! (Yes, you read correctly - the ice cream was 740 calories!)

The rest of our drive was quite a long one. We were going to stop as Fresno but carried on a further 40 miles to get to Oakhurst, where we decided to find an RV park for the night at it was getting late. We decided 380 miles for today was enough!

The first one we stopped at wanted $50 for the night, so we continued to the next which was quite a bit cheaper.

After feeling grubby sitting in the motorhome most of this hot and sunny day we both grabbed a shower before enjoying another yummy stir fry for dinner. Thankfully the weather here in Oakhurst is a lot cooler, so we should be in for a more comfortable night.