Heading Down To LA 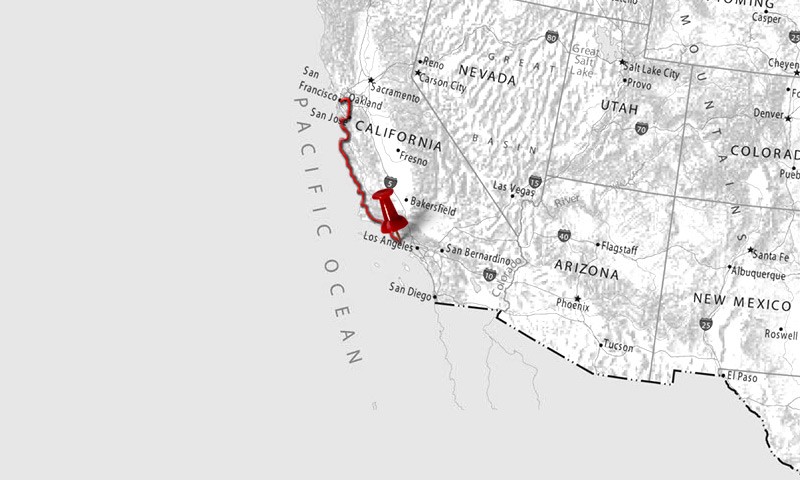 We awoke to a really sunny morning in Santa Barbara. Our intention today was to have a brief look around Santa Barbara, and then head down to LA. Stu's mate Adrian had offered his place to stay down there for the weekend.

This morning we showered, had breakfast and then checked out of the campsite.

We decided to pay a visit to the Santa Barbara Mission first, which is supposed to be the nicest of its kind in California. It's a lovely looking building, and it costs $5 to take a self guided tour through the mission, which includes the church and cemetary. It was only when we came to paying the entry fee that we realised we hadn't got much cash left, so we ended up paying mostly in silver coins - the lady didn't seem to mind too much though.

I suppose the most interesting aspect of the mission was the church, which featured some paintings which were a couple of hundred years old.

It was while we had parked at the mission that Stu realised he had lost the hood for his zoom lens. We looked all through the motorhome to try and find it, but to no avail. He wasn't a happy bunny.

we took a further drive around the town, and then headed to the coast to take a look at the wharf area. We found a spot to park up the motorhome and then went into a local restaurant to grab some lunch. We got a great burger, and pretty good value too.

Next we took a walk up along the pier. it was a nice walk and gave us a good view along the beach. What did make me laugh though was the valet parking on the pier. I assume they don't want people doing their own parking on the pier to ensure that no damage is caused etc., but it was quite amusing to watch. Basically, a car will pull up and the valet parking attendant will get in, then just park the car about two metres away. It seems a bit daft to me and a waste of time, but that seems to be the way they want to do it. I can understand valet parking if you need to park far away from the place you want to get to, but this seemed completely unnecessary.

After a nice walk along the pier here, we took a walk back to the motorhome and then began our drive to Los Angeles.

As it was a couple of hours of driving down the freeway to get to LA I thought I would give the cruise control a try in the motorhome. I have never used it before, but essentially you just set your speed and then take your foot off the accelarator and let it work by itself. This feels really strange at first but you get used to it, and it's a good way to rest your foot. I had to take over a few times though because we hit pockets of traffic, but it is a good way to maintain speed and not go over the limit.

We were making good time getting to LA, until we hit LA traffic on the freeway about 20 miles away and then it slowed up quite a bit. It probably took us the best part of forty minutes to get to Adrian's place from here. He lives in the area of Los Feliz.

We managed to park up the motorhome easily enough down Adrian's road as there was plenty of space. We brought in a few bits and pieces from the motorhome as we would be staying with Adrian for most of the weekend.

Adrian took us out for a brief walk around the block to grab some bits for dinner. We went to his local butchers and got some great tuna steaks for dinner - and a pork chop for Stu.

Back at Adrian's place I made a start on our washing which has been building up - we had three loads to do so it needed to be started asap. Then we took a seat on the balcony and enjoyed the last of the daylight while enjoying a glass of wine.

Dinner later was fantastic, as Adrian cooked the tuna steaks to perfection - they were delicious. After a great meal we settled in for a relaxing evening watching a couple of movies. The first was 'Due Date', a pretty good comedy. It seems to be a bit like Planes, Trains and Automobiles but a bit crazier - it was worth a watch. We also watched another good movie, but very different style, called 'Limits of Control'. Then we called it a night around midnight and headed to bed - nice to have a break from the motorhome and stay in a proper bed.