Up Into The Hills 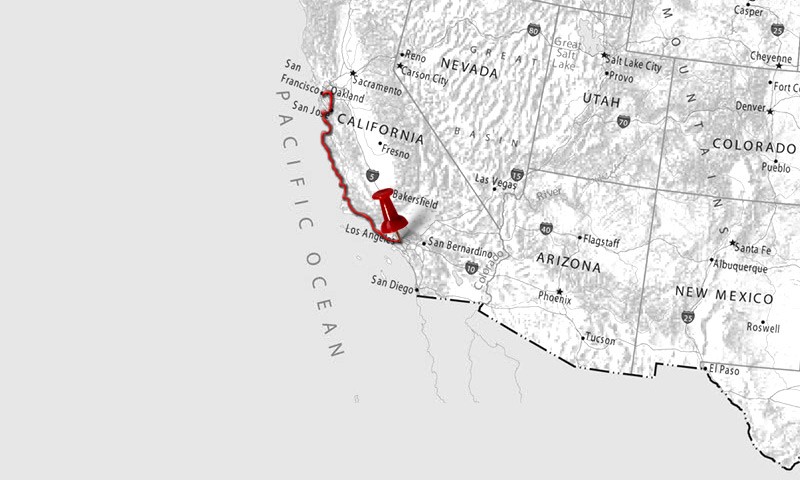 After a fantastic night's sleep in a proper bed, we awoke feeling very refreshed. The plan for this morning was to take a walk into Griffith Park, just a short walk from Adrian's place.

His girlfriend has a couple of dogs, and we took one of them along with us for the walk. The other is recovering from a recent hip operation so stayed behind with Elizabeth.

Our walk took us through Griffith Park, past some of the very swanky and expensive looking houses. Eventually leading us to the top of the hill where the observatory is located. Adrian waited outside with the dog while Stu and I went inside.

The observatory is very impressive, and there are some great exhibits and displays. In the centre of the entrance hall is a huge pendulum swinging from the roof of the observatory, displayed to illustrate the movement of the earths rotation. They also had one of telescopes open, with a live view of the sun - quite impressive, although not a huge amount to see.

Outside there was a great view of the Hollywood sign, and also back down towards the LA basin and downtown LA. There was also a statue dedicated to James Dean, which explained on a plaque that some key scenes of Rebel Without a Cause were filmed here at the observatory. I have seen that film so many times, but didn't click that it was THIS observatory. Now it makes sense andf loooks familiar.

We took a walk back down the hill, which took us past some more expensive houses. Adrian said that one of the houses we went past is supposedly where Slash lives.

Back at the house we ordered in some falafels for lunch, which were delicious. We also got tickets to see the Adjustment Bureau at a local cinema this afternoon. The rest of our time before the film started was spent relaxing at Adrian's.

We headed out to catch the film around 4pm, it was just a brief walk from Adrian's to the cinema. The cinema itself was pretty unique, more like a theatre than just your regular cinema screen. It was all in an Egyptian style, both inside and out, making it something a bit special. Plus, inside they had removed every other line of cinema seats to make for much more leg room.

The film itself was ok, but not as good as we had expected. From the advert it had looked quite good, but I was a bit disappointed. Still, it was nice to have an evening out.

We headed back to Adrian's, where we ordered in pizza for dinner and sat down to watch Sherlock Holmes - the latest movie with Robert Downey Junior. Again, another film which was not as expected and a bit of a disappointment. I hadn't realised at first that it was a Guy Ritchie film, but it certainly made sense (all the fighting scenes etc.)

Another lovely day in LA.