Up To The Snow Capped Mountains 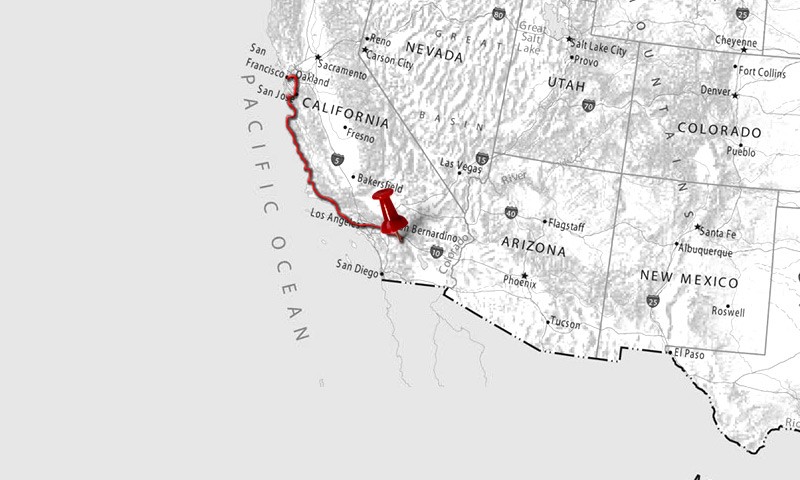 Yesterday, Stu had an important piece of work to get done so there seemed no point writing a blog entry. We just stayed in the same rv park for another night. Thankfully the windy weather of the previous day had completely gone and we had a sunny, hot day.

Today was much the same, very hot and sunny. Stu had to finished off his work this morning which just took a couple of hours, and then we left our rv park.

Before heading to the Palm Springs Aerial Tramway, we had to find somewhere to fill our gas tank (for our cooker, heating etc.), and also to fill up on petrol. We found a Shell garage nearby to fill the gas, but they were out of the pertol we needed. We drove to the next one down the road, but they didn't take credit cards so had to go to the next one - finally we were successful. Filling up with petrol in the US (apart from Hawaii which was fine) seems to be a bit of a pain. Most of the time you can pay at the pump with a card, but it asks you for a zip code - which of course we don't have - so it means we have to go into the shop, give them our card, fill up the petrol then go in and pay. It's a hassle. They always ask you how much petrol you want to buy too, but we just want to fill the tank so we don't know until it's full!

Anyway, after finally getting petrol sorted we drove back across the other side of Palm Springs to the Visitor Centre, where we had parked the other day. It was around midday so we decided to make some sandwiches for lunch here before driving to the tramway.

After lunch we took the road by the side of the Visitor Centre to take us to the tramway. This road takes you up to an elevation of around 2,600 feet, which is where the car park and visitor station for the tramway is located. They have a shop and cafe here, but we just parked up, changed into some warmer clothes (it would be cold up there) and bought our tickets for the tramway. The tramway itself is essentially a large type of cable car. It is designed to carry up to 80 passengers. There are two cars running at a time, one going up and one coming down. After buying our tickets we boarded the next available tram.

The tram is standing room only around the outside, with a couple of seats in the middle. We positioned ourselves at the front - although there is no need to find a specific spot as the floor of the tram actually rotates so you get to see the journey from all sides on the way up. It's quite impressive, and means you always get a good photo opportunity.

It was a pretty impressive ten minute, 2.5 mile journey to the top of the mountain. On the journey you pass through five unique life zones, from the Mexican Sonoran Desert to the Alpine wilderness. The journey is an incredibly steep one, which takes you up to an elevation at the top of just over 8,500 feet. The journey is pretty smooth, although when the tram goes through each of the towers along the way it does sway a little which feels a bit strange. The driver does warn you aboout it though, and everyone on board gives a bit of a 'whoooah!'.

At the top we were able to look out from a few observation points. It was an amazing view. At the top it felt a lot cooler, and we were surrounded by snow and ice. Down below we could see Palm Springs as it basked in the heat of the desert. It felt so strange to come into a different climate in just ten minutes.

After walking through the visitor centre at the top we took a pathway which led down towards the start of some of the nature trails. Due to the snow everywhere, we opted for the easy 1.5 mile nature trail which led to the desert view. Whilst the snow was very deep in places, at least a couple of feet, we stuck to the main route which was well packed down and easier to walk on.

It seemed that not many people were taking these trails today, as only a few minutes after leaving the main pathway we were virtually on our own, in the peace and quiet of this beautiful snowy lanscape. Along our route we saw some lovely big trees, some squirrels and (what I suspect to be) chipmunks.

Eventually our route led us to an edge where we were able to stand on some large rocks and get a tremendous view down to the desert once again. Stu wanted to take some shots of me standing on the edge of one of these rocks. I obliged, but my knees were a little wobbly. After getting some lovely shots we began to head back to the visitor building.

By the time we got back it was around 5pm. All the walking through the snow, as fun as it was, had made us feel the cold. We headed up to the cafe to get a hot chocolate. They also sold churros in the cafe too, which went with the hot chocolate perfectly.

We got the next tram back down to the car park. It was at this point that Stu realised something else which he seems to have lost. While we were out walking he took the clip off his little GPS device (for some unknown reason), and it appears to have gone missing. Thankfully, we still have the GPS device (this is what Stu uses to record where we have been, not to be confused with our sat nav app on the iPad). It just means that we now no longer have a clip to conveniently clip the GPS to our bag anymore. Up until this point Stu has been carrying his own passport, but today I decided to look after it instead as he seems on a roll of losing things lately.

Once back in our motorhome we decided to head towards the Joshua Tree National Park. As it was now starting to get dark we thought that actually entering the park could be left until tomorrow, and so instead we drove to the outskirts of the park and found a campsite here. The good thing is that it's only $30 and has wifi! There are also some of the interesting looking Joshua trees in our campground.

After Stu did his favourite task of emptying and cleaning the toilet, we sat down for dinner and settled here for the night. Stu was also finally able to sort out some of the pictures from the last week so we can get some of our blog entries posted, as he hasn't had a lot of time to do them lately.