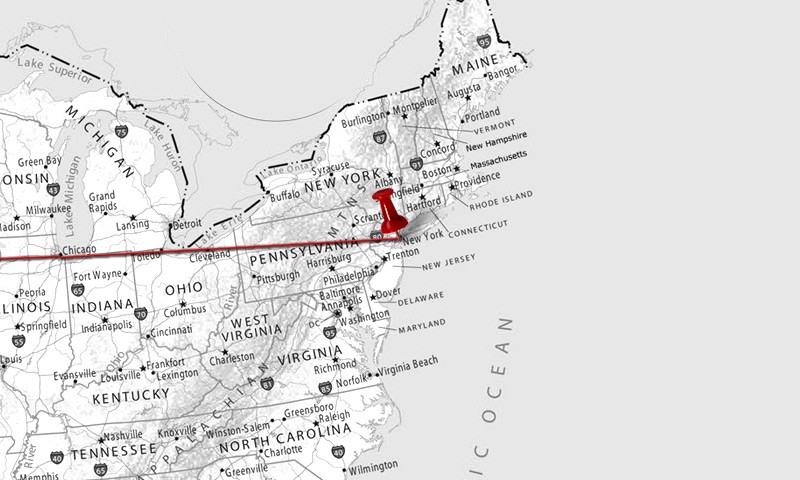 We managed to struggle out of bed a little earlier than yesterday - just about! We grabbed breakfast at the Tick Tock diner just next door to our hotel, then headed over to the Empire State Building. It seemed that a lot of other people had the same idea too, as the queue to get inside was snaking around the corner of the block. However, it seemed to be moving along fairly quickly and the weather was good today with clear skies and sunshine, so we had to take advantage of the nice day and get to see the view from the top.

Once inside the building we saw that the queue did not end there. It was snaking all through the lobby area, and this was where we began to realise that we might be here for a while. However, it was still continually moving, albeit rather slowly, so we thought it wasn't that bad.

Soon we came to the security checkpoint. Here they had x-ray machines just like at the airport - they obviously don't want to take any chances. We got through this fine, but on the other side we realised that there was another long snaking queue to take us to the ticket desk.

We must have made it to the ticket desk after around half an hour of queueing so far, and got our 'free' tickets for the Skyride and Observation Deck. ('Free' because of our purchase of the New York Pass). The Skyride was billed as a motion-simulated ride through the streets and around the buildings of New York, narrated by Kevin Bacon no less! This is located on the second floor of the building, and the Observation Deck is located on the 86th floor. You can pay another $15 to ascend to the 102nd floor, but we didn't see much point.

After the ticket desk the queue split into two. One queue was to the Observation Deck, the other to the Skyride. The queue to the Skyride didn't seem too long so we continued in that queue. Little did we realise just how long this queue would actually take. After waiting for around 20 minutes or so, we discovered that although they have two motion-simulator theatres - each with a capacity of 39 people - one of them was broken. This meant that the waiting time would be longer than normal. However, we decided to stay in the queue as we thought it wouldn't be too much longer.

Around an hour later we were still there! Although we could now, finally, see the entrance to the theatre. The only thing we were worried about now was if this motion-simulator ended up being complete garbage.

After waiting another 20 minutes or so we gained entrance through the doors with our party of around 40 people. We thought we had made it, but this was simply a holding room where they showed us a naff video about the top ten attractions in New York City (and obviously the Empire State Building was number one!)

After the naff video we went through to what we thought must be the theatre... but no, it was another holding room and another naff video. This time showing us pictures of New York City.

The video finished and we were waiting around, wondering if we would ever get to experience this bloody Skyride. A woman who worked there was telling us that the reason for all the long queues and the waiting was because we'd had poor weather for a few days, and the sun coming out today so everyone wanting to visit the building. This meant, and I quote the woman, that there was "... a high velocity of people today". And that was no slip of the tongue, as she repeated the same thing to someone else straight after. Superb!

We finally made it into the theatre and got ourselves seated. They had obviously miscounted the number of people in our group, as there was a handful of people from our group that didn't get a seat and had to wait outside for the next showing. I felt bad as I saw one of them shout "What? We have to wait again?" Poor bloke.

As the show started our seats rose up and shifted around, in sequence with the video screen images in front of us. Essentially, the screen was showing us swooping around some of the buildings of New York, and the motion was supposed to be simulating that.

I think the show had been going for about ten minutes or so when the seating platform made a bit of a clank, and then a message came on the screen saying "Thanks for watching". Everyone looked a bit puzzled. I was unsure whether something had gone wrong, or this ride was utterly terrible! Either of which could be possible. As the lights came up it became obvious that something had gone wrong. The staff members in the room were both looking confused, one of them asking the other to start the ride again, but the other saying it wasn't working. After a lot of muttering and people asking what was going on, the lady working there opened the exit door, said sorry informing us the ride had broken, and then asked us to leave through the door! Most people were is disbelief, and started shouting and protesting about the fact that we had queued for this ride for well over an hour (nearly two if you include the entire queue from the front of the building, not just for this ride). All the staff members said was that there was nothing they could do and that we should ask for a refund - utterly ridiculous and unacceptable considering the time taken waiting in the queue. As more protests were being made about our treatment, the woman who worked there simply replied "Well, it's not my fault". Now, I'm a mild mannered person, but I could have easily punched her in the face at that moment.

So, it seemed that we had completely wasted our time queuing for this ride. Our only consolation was that at least we had seen ten minutes of the show - not like the poor buggers behind us in the queue. When we got outside of the ride we immediately grabbed a member of staff. Explaining that we don't want a refund - as we hadn't actually paid for the ride anyway because of our New York Pass - we demanded that he write on our ticket that the ride broke and that we be let straight to the front if we decide to come back again. He managed to get hold of his manager and did this for us. However, there is a good chance that we won't bother going back anyway.

At the top we briefly managed to forget the wasted part of our lives we had just had in the queue and managed to enjoy the view. It was a great view of New York City, and despite there being loads of people on the Observation Deck we managed to find plenty of gaps to take a look and get some photos. The great view helped to relieve some of the anger of the Skyride experience.

After fully enjoying the view from the top, we made our way back down the elevators to the bottom. We had considered checking to see if the Skyride was working again and finding out if we could get straight to the front, but we both decided in unison to "Sod it!"

Instead we headed out of the Empire State Building and straight into Dunkin Donuts to grab a coffee and a snack. We were both glad to have visited the Empire State Building, and certainly pleased with seeing the view from the top. It was just such a shame it was marred by the 'joke' that was the Skyride experience. My advice to anyone, don't bother with it. I know we only saw ten minutes of it but it looked pretty naff anyway.

After a quick look at the map to see what other 'free' things we could do with our New York Pass nearby, we spotted the Museum of Sex just across the road. Our guide book states 'The mission of the Museum of Sex is to preserve and present the history, evolution and cultural significance of human sexuality'. Well, it was certainly an interesting museum, presenting some quite amusing exhibits. The gift shop had some amusing items for sale too, it wasn't a bad way to spend an hour or so.

After this we just strolled around, in no particular direction, and Stu just took pictures along the way. It was actually quite nice not to have anything specific to do but just take a walk.

As we headed in the direction of our hotel after dark, we spotted a Chinese restaurant and decided to have some dinner here. The food was nice, but once again I was startled by the size of the portions. I ordered pan-fried noodles with beef for my main course and it was huge! It could have easily fed the two of us. In fact, it has really made me think about the amount of food that must be wasted over here. I am usually someone who easily finishes my meals, but this is certainly not the first time I have been beaten by a meal in the US. Despite the good food, I left the restaurant feeling incredibly guilty at the waste.