Last National Park Of The USA 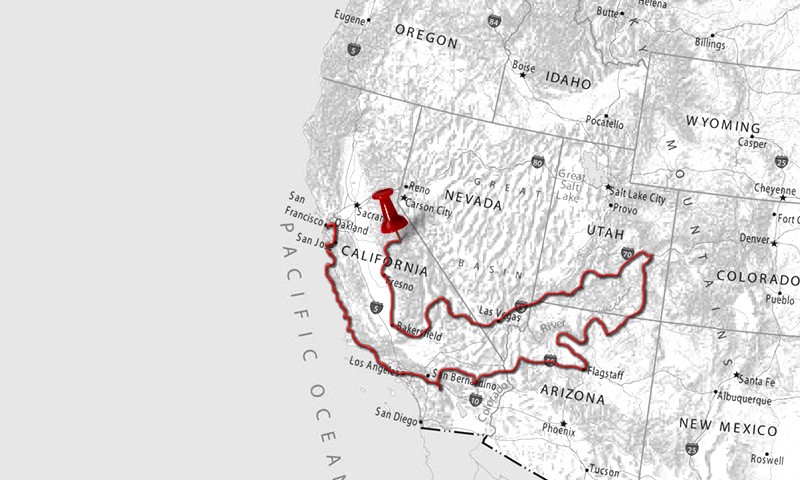 Yesterday we had a fairly relaxed day, hence no blog post. We stayed at the RV park in Oakhurst for the day and another night so we could get a few things done. I needed to get a load of laundry done, as Stu literally had no clean clothes left. (He was sat naked in the van while I got his clothes clean!) It was a bit of a pain at first. Once we had decided to stay in the park during the morning, I headed up to the laundry building, which was just up a little hill within the park, with three giant bags of laundry in tow, only to find the laundry was locked. The sign on the door explained that due to 'unauthorised activity' the laundry was locked and I had to get someone from the office to open it. I left the laundry bags there, wandered down the hill to the office, only to find they had locked the office and gone out! Therefore I had to go back up the hill, retrieve the laundry and take it back to the motorhome. It was a bit concerning as doing the laundry was one of the main reasons for staying here another night, so we hoped they would return soon.

Stu left a note on the office door for them to let us know when they were back, and thankfully they returned within the hour and unlocked the laundry for us. While I got our clothes clean Stu took some time to sort the photos for the blog, as he was behind by a few days. Once he got these done we were able to get our blog up to date again.

The rest of the day was fairly relaxed. It was actually a nice little RV park, and we were parked right near the river with hardly anyone near us so it was nice and peaceful.

This morning we decided to head up to Yosemite National Park, the entrance to which was only around a 15 mile drive from our RV park. We weren't too sure what the driving conditions would be like, as reading online it appeared that snow chains may be necessary this time of year!

Once we had entered the park it was evident that they had previously had some serious snow here. It was piled high either side of the road. However, they had also dome a good job ploughing it too as all the main roads seemed to be clear. Some roads are closed this time of year as they are not cleared, but we were fine to take the Yosemite Valley drive. In fact, I think we may have come just at the right time of year as they had turned all the signs around which designated roads needing snow chains, so they obviously weren't needed. I am sure that if we had been here a few days earlier it would have been a different story.

It was a nice start to the Valley drive, along lots of winding roads and getting to some quite high elevations, and lovely viewpoints. At the first really impressive viewpoint we could see a couple of really high waterfalls, and also our first view of two well known points of the Park - El Capitan and Half Dome. El Capitan is a giant, 3,000 feet tall granite rock, and Half Dome (as may be fairly obvious from it's name) is a half dome-shaped granite rock.

A little further down this road we entered a tunnel through the mountain - which we just scraped through as the clearance was 10 feet 2", and our motorhome is 10 feet tall exactly. It was only a fairly short tunnel though, and once out the other side we were treated to a stunning view of the valley where we saw El Capitan, Half Dome and the beautiful Bridalveil Falls. We parked up here to have a proper view and so Stu could get some pictures. Despite the mainly cloudy day, the sun broke through a few times which made an already stunning view even better.

A further drive down the road and we found ourselves at the trail to Bridalveil Falls. We parked up and took the short trail to the foot of the falls. There was a fair amount of spray coming off at the bottom of the falls so Stu wasn't really able to get a good picture from here, but it was pretty cool to be there and look up to the top - despite getting a bit wet. We could take a trail in another direction which gave Stu better chances to take pictures, and see the falls from another angle.

Once back in the motorhome we came to a few other great places to stop and get out to take pictures. Some more really beautiful waterfalls and nice views of the river. It was very picturesque with the snow too, a beautiful place.

A bit more driving and we were coming up to the place where we needed to stop and make a campsite reservation, as they are by reservation only in most camps in Yosemite. We were extremely lucky as there were only four sites left in the entire park! As it was getting late into the afternoon we decided to head straight to the campground and get parked up for the night. We were given warnings about how to store our food, as they do get Black bears in the park. We are OK to have food in our RV but we just need to make sure we don't leave anything on display in the motorhome that might be easy pickings for the bear. Also, if we do see a bear the best course of action is to make lots of noise to frighten it away. To be honest, if I did see a bear I think I would make a lot of noise anyway out of shear panic!

Once we found our site and parked up I made us a cup of tea while Stu started sorting through his photos from the day. It's bizarre as despite all the snow settled in the park, it hasn't actually been cold at all. Today you probably would have got away with just a t-shirt, especially when the sun came out. Once the sun started to set it did get a bit cooler though. We didn't envy all the people we could see around our site who were camping in tents, and cooking their food outside. But we weren't feeling smug in our cosy motorhome - not at all :)

Just before bed Stu put his camera equipment up in the top storage compartment, instead of the usual place on the front seat of the motorhome. (I know we were given warnings about bears breaking into cars, but I think they are more likely to go for a bit of steak than your Canon 5d mkII Stu!)

It's hard to believe that our motorhome trip will soon be coming to an end. After Yosemite we will be making our way back to San Francisco to return our motorhome, then flying to Chicago. I think in some ways we will be glad to be out of the motorhome after six weeks or so, but we will also miss being on a road trip. It has been a lot of fun.