Heading Back Towards San Francisco 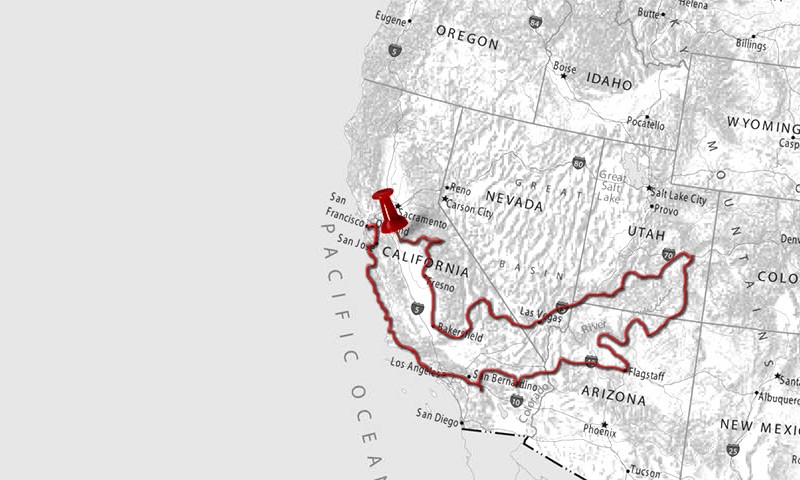 We awoke to a bright, sunny day today. All the cloud from yesterday seemed to have cleared. First we had to empty our grey and black water from the motorhome. Not very thrilling, but a necessity I'm afraid.

It seemed there was a bit of a queue for the dump point in the campground due to one of them being blocked, therefore only having one in use. It also didn't help that the people in front of us were taking what seemed like forever to empty their grey water. The silly thing is, they had a tiny campervan - how much water could they possible have to empty? Finally we got to empty ours - in a quarter of the time they took. Stu wanted to take a walk to Mirror Lake in Yosemite this morning. There wasn't any parking at the trailhead for it which would mean having to get one of the free park shuttle buses, but first we had to find a parking space for the motorhome. This is easier than it sounds as each car park we found was virtually full, and it's not as if we can squeeze into any old spot in the motorhome. I guess it didn't help that it was the weekend, meaning it was busier than normal. Finally we found a spot though, and took a short walk to grab the shuttle bus. It was only around a ten minute journey on the bus to the trailhead for Mirror Lake. The bus driver recounted his bear experience with us all on the way, telling us about the time a bear got on his bus and he had to let it out of the back doors while he jumped out the window. He then proceeded to tell us a few terrible jokes too, but it made the journey race by. Once off the bus we had around a mile to walk to get to Mirror Lake. This was all paved and easy, although once at the lake there was a bit more snow and sludge actually around the lake. Thankfully it was starting to melt though so no really slippery ice. Mirror Lake itself was very pretty. There were some great reflections on the still water of the lake, and some lovely views of the sheer rock faces around us. We also spotted a few small waterfalls making their way down the rock faces too. Stu managed to get some lovely photos here, although it took a bit more patience than normal due to it being fairly busy with people - lots of them getting in the way. After a nice walk around Mirror Lake we took a walk back to the bus stop, got the bus back to where we had parked the motorhome and then had a spot of lunch. It was now mid-afternoon and we intended on leaving Yosemite National Park to begin our drive towards San Francisco. On the way out of the park though we parked up briefly nearby Yosemite Falls to get a look and some pictures. Yosemite Falls, according to our park brochure, is the tallest falls is North America - so it seemed worthwhile to make a stop here. It was very impressive too, it has to be said. There were also some deer in the field just in front going about their daily business. We drove out of Yosemite on the 120 route which took us back out west, heading back through Yosemite Valley with some more stunning scenery. We managed to catch another glimpse of Bridalveil Falls too, which was definitely worth a stop for some more pictures. After a very picturesque journey we eventually decided to find an RV park around 80 miles out of San Francisco, as we were in no huge rush to be in San Francisco tonight and it was also getting a bit late. We had looked one up on our iPad app, but when we got there it seemed they had just had a huge flood - the whole RV park was under a few feet of water! So this meant finding another place as the sun was starting to set. We also ideally wanted an RV park that had wifi so Stu could check his email and also so we could book a hotel for the night after we return our motorhome. We found an RV park a few miles away, but unfortunately because we had got there quite late their office was shut. We were probably fine to park up on a spare site and sort payment tomorrow but their wifi was password protected. Luckily, there was a guy nearby sorting out something on his RV so Stu went to have a chat with him. It seemed he didn't have the wifi password but he lent Stu his mobile phone so he could call the owner of the park. After a quick chat with the owner on the phone, he came down to the park to meet us, gave us a key to the shower block and sorted us out with the wifi - we got there in the end! This evening Stu managed to book us a cheap hotel for the day we return our motorhome, before we fly to Chicago. I was feeling tired after a lot of driving today so Stu cooked us a lovely dinner. Tomorrow we head back to San Francisco to get the motorhome cleaned and return it.