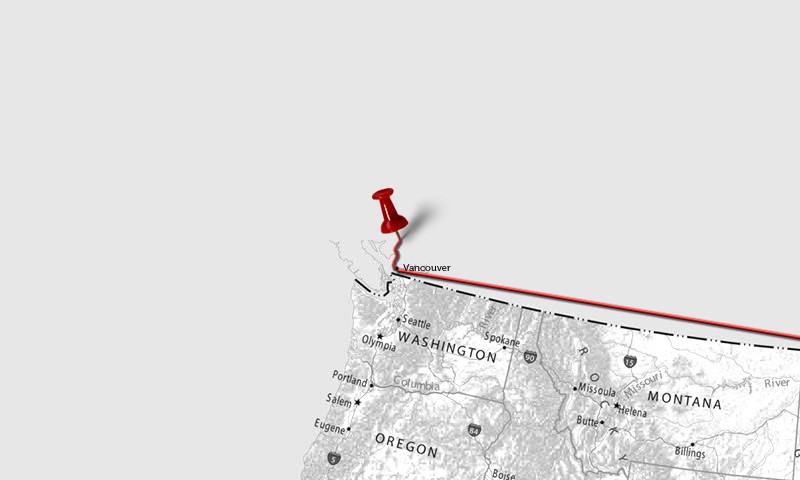 We awoke early this morrning so we could get to the rental shop in good time to avoid the expected queues. We arrived just before 9am and there were only a couple of people in front of us. Ten minutes later the queue started filling up so we arrived just at the right time.

Here we got fitted for our equipment. Stu had opted for snowboarding today, and I skiing. The fitting for snowboards and skis are very different, and the boots for snowboading look a lot more comfortable. For skiing the boots are really tight and I could feel my feet starting to ache straight away. Plus, the boots are not that easy to walk in either.

After being kitted out with our boots, skis and poles and snowboard we still had some time to grab a bit of breakfast before making our way over to the snow school and meeting our instructor for the day, Eric. He was a really nice guy from Quebec, and we lucked out with having him all to ourselves.

Unfortunately, once on the gondola to take us to the first slope Eric pointed out that we didn't have helmets. Whilst he said it was less of an issue for me, he said that as a snowboarder Stu would really need a helmet. We felt a bit annoyed that the girl who sorted out our rental equipement hadn't advised us about this. So Stu took the gondola back down to the shop to get a helmet, while Eric let me use his and started to go through some techniques with me. Although Eric just had a snowboard, it was easy enough for him to explain the skiing techniques to me.

After some explanation Eric had me starting and stopping down a small slope, just a few metres long. It's one of those things that just clicks in your head. You try a couple of times and aren't sure, and then it just works. After that he had me turning whilst going down the small slope, and then trying a mini slalom. All good practice to keep me going for a few minutes. Meanwhile Stu had returned with a helmet and Eric went through the basics with him.

We had booked a morning and afternoon lesson, and in my head I assumed we would spend the whole morning on this mini slope. I was wrong. After Eric felt we had both mastered the basics he said we were ready to take the first slope down to the bottom.

Feeling a little nervous (well, me anyway) we started to make our way down the slope. We both fell over a few times, but we found ourselves gaining confidence and really starting to enjoy it. It was good fun, and I hadn't expected to pick it up so fast.

At the bottom of the slope we headed to a restaurant to get some lunch. I don't think any of us was extremely hungry but we were certainly thirsty.

After some lunch we took a ski lift up to a much higher slope - significanbtly higher and steeper than our basic run this morning. Whilst we were a little concerned about trying the harder slope, Eric told us he had absolute confidence in us and that if he didn't think we could do it he wouldn't have taken us up there.

Once off the lift things started out ok. I think I may have come off once or twice near the top, just while I found my stride again. We saw Stu power on ahead for a minute and expected that we would catch him up as soon as I found my feet again. However, as we contined on there seemed to be no sign of Stu.

Eric and I continued down the slope. I was going well for most of it. I didn't like one section where the slope became thin with a steep egde off the side. In my head it made me a bit afraid, which is why I took it really slow here. Then it went OK for a while - still no sign of Stu - until we hit a really steep bit. I think because it looked steep I started to loose my confidence a little. I fell over quite a few times here, and in quick succession too. The snow was also quite slushy, as it is April, which I didn't like. This didn't really help my confidence either and I was starting to get really frustrated and tired of pushing myself back onto my feet again.

After we made it through the really steep bit I was fine again. I found myself skiing well, veering from side to side, turning nicely etc. It felt amazing! Despite Eric not letting me use my poles most of the time, as he wanted me to balance without them, I had them in my hands towards the end of the slope and it felt amazing - weaving from side to side with the poles in hands, I actually felt like a bit of a pro (OK, it may have only been in my head, but it felt fantastic!)

There was a bit of a steep section just as the slope came to an end at the bottom in the village. I don't know where this rush of confidence came from but I just decided to stop going from side to side (which of course helps you control your speed) and just ski in a straight line to the bottom. I started to go really fast, and had a small panic as I saw myself coming really close to someone in front. Thankfully I kept my cool, brought my skis together at the front and came to a stop at the end of the slope. It was great as Eric came over and said I did amazingly well. He also said he was a little scared when he saw me going fast at the end - but hell, I was scared too so that made two of us! It was great though.

We hoped we might see Stu at the bottom but had a look around and there was no sign of him. Eric suggested that perhaps he had come down to the bottom of a different slope so we took a walk over to the bottom of that slope, a five minute walk away. Doesn't sound like much of a walk, but when you're walking in ski boots it feels like it's never going to end!

At the other slope we could still not find Stu. At this point I was beginning to get worried. Although I knew that Stu had seemed very capable on the snowboard and I trusted that he wouldn't do anything silly, part of me had visions of him stuck in a ditch somewhere with a broken leg (or worse!) Eric suggested we go for another run down the slope, but I didn't really want to carry on until I knew Stu was OK. Plus, my feet were aching and I was feeling tired too, so thought it would be good to have a break. I suggested that perhaps he should go back up to the top of the slope, come back down on his snowboard and see if he could spot Stu on the way. Eric is a pro so he would be able to come down quick enough.

I took the gondola up to the basic slope and waited there, while Eric continued to the big slope up top.

About ten or fifteen minutes later Eric met up with me and said he'd had a call from his office and that Stu was waiting at the bottom of the big slope. I was feeling really tired and achy and had decided that I didn't want to do anymore skiing for today, so said I would get the gondola down and meet them at the bottom.

When Stu and Eric met me I was glad to see that Stu had no injuries. In fact, he'd been having a whale of a time apparently! After he lost us (or rather, after he sped off and left us behind) he managed to get to the bottom and come back to the top and do it a second time! Not only that, but at one stage he found himself on one of the more advanced sloped by mistake but still got on fine! (And there was me worrying eh?)

In fairness, I think Stu felt a bit bad for worrying, but at the same time I think he was rather glad he did leave us behind as I was obviously a bit slower than he was. I can't say I was happy that he got me worried, but I am glad he did well and had an amazing time.

By the time we had all caught up with each other we only really had about half an hour of our lesson left, and Eric advised us that it wasn't really long enough to do another slope. I'm sure Stu would have loved to have done another one, but I was more than ready to get my ski boots off and head back to the hotel. I had thoroughly enjoyed it, but I was definitely tired now.

We bid a fond farewell to Eric, who was a great intructor, and headed to the rental shops to change back into our shoes. It felt so good to get the ski boots off, though my feet felt really strange at first trying to walk in normal shoes.

We grabbed a much needed drink on the way back to the hotel and then took a look at some of the footage from today. Our hotel rents out mini cameras for free that you can attach to yourself while skiing. Stu had taken one of them along with him today and got some pictures of us and some skiing footage. Unfortunately there is very little of me in it because of Stu going off alone, but some of the footage of him snowboarding is pretty cool.

All in all a really good day today. We both feel quite tired now, and I am sure we will ache like mad tomorrow, but we had great fun. I think I surprised myself at how much I enjoyed it and how much I pushed myself, considering I was quite nervous beforehand. A great new experience for the both of us!

After relaxing in the hotel room for a bit we headed for some dinner and some much needed beer - the perfect end to an adrenaline fuelled day. I think I will sleep like a baby tonight!