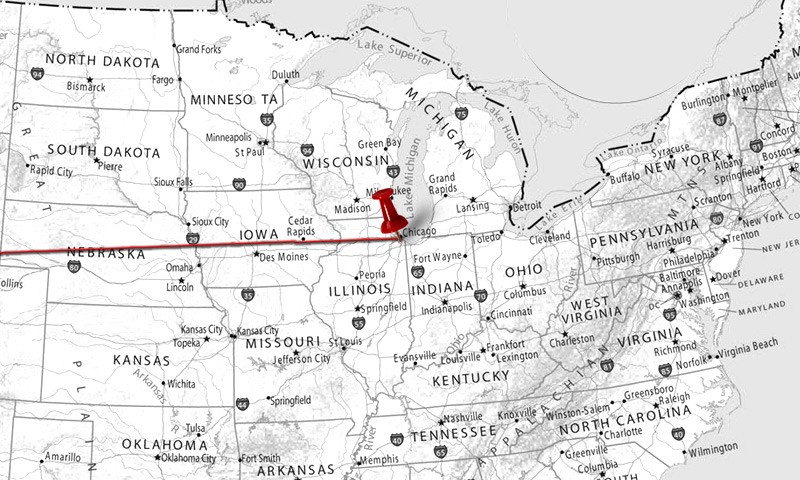 This morning we were going to venture out into the city. Chaz gave us some pointers about places that would be good to visit, and very kindly printed some maps for us and lent us a guidebook so we could find our way around.

Once downtown it was around midday and quite cold outside (bit of a change after the sunshine and heat of California) we found a nice cafe to stop and have lunch first. I opted for a small coffee and a chicken Caesar salad - both of which were pretty big. I would say the size of the small coffee was at least a regular size back in the UK. It was good food and coffee though so no complaints.

Just before we left, Stu darted to the loo and fortunately stumbled across an impressive model city of Chicago on his way. He came back and took me along to show me, and it was pretty cool. A full scale model of the city of Chicago with each building detailed. Very cool.

After warming up we ventured back out into the cold and walked over to Millennium Park. This park is a huge area with lots to offer. We walked past a large pavilion in the centre, there are some interesting, modern sculptures along the pathway and then you are lead to Cloud Gate (commonly referred to as 'The Bean'). This is a public sculpture by Indian-born British artist Anish Kapoor constructed between 2004 and 2006. It is nicknamed 'The Bean' because of its bean-like shape. It is a really impressive structure, made up of 168 stainless steel plates welded together. However its exterior is highly polished and has no visible seams. Apparently the design was inspired by liquid mercury and the sculpture's surface reflects and distorts the city's skyline. You can walk right around and underneath the sculpture and achieve some very interesting reflections and photographs.

Walking further through Millennium Park you get a nice view of some of the impressive buildings in Chicago. There are some fine old buildings, architecturally very attractive. These old buildings interspersed with some newer skyscrapers makes for quite an attractive sight.

Next we saw Crown Fountain. We were unsure what it was at first, simply seeing two huge video boards facing each other, both with faces on them that were changing their expressions. We have since discovered that this is an interactive work of public art and video sculpture designed by Catalan artist Jaume Plensa. The fountain is composed of a black granite reflecting pool placed between a pair of glass brick towers. The towers use LEDs to display digital videos on their inward faces, and is designed to have water intermittently spurting water from the mouths of the people's faces. However, we must be out of season as the water wasn't flowing while we were there.

A further walk through the park brought us to the BP Pedestrian Bridge. This is a girder footbridge which spans Columbus Drive to connect Daley Bicentennial Plaza with Millennium Park. It is a snakelike, curving bridge which has apparently won awards for its use of sheet metal. It also serves as a noise barrier for traffic sounds from Columbus Drive. We took a walk over the bridge, but then just came back into Millennium Park once again.

The Art Institute of Chicago is located in the park. We had walked past it on our way in, but decided to head back and take a visit inside. We were both getting a bit cold outside, plus the place had come highly recommended in our guide book and online.

It was $18 each to get in, but this actually worked out to be great value. The Art Institute has an extensive display of art. There is sculpture, paintings, photography, architecture and design - even dolls house miniatures and paperweights! It also houses some very well known classic works by famous artists. We were pleasantly surprised by what they had on display. They had work by Picasso, Monet, Degas, Van Gogh, Dali, Rodin to name just a few. Some famous paintings on show were Grant Wood's 'American Gothic', Edward Hopper's 'Nighthawks' and Georges Seurat's 'A Sunday on La Grande Jatte. We were also impressed with some of the Egyptian pieces on display, which included some impressive mummy head covers, various pottery (which was in remarkably good condition despite it's age) and a full mummy sarcophagus. I think this has to be one of the finest art galleries I have ever been to, we were both very impressed. It was a great way to spend the afternoon, but spend it we did! We left the place just as it was beginning to get dark.

We had agreed with Chaz that we would be back around 7pm so we could get food, so we had to head back to the station to get our train. However, because it was getting dark Stu wanted to get a picture of the Chicago sign on the Chicago Theatre, as it would now be illuminated. This was a bit of a walk out of our way but we managed to get there, get the shot and get on.

We had a slight issue when coming to get our train back to Chaz's place. The tickets you buy for the train, effectively you charge them up with cash. Each journey costs $2.25, but you can put as much cash as you want on them - then the money is just deducted off the card each time you use it. When we bought our tickets we used the last of our dollar bills putting money on our cards - $4 onto Stu's and $5 onto mine. Whilst in town we tried to get money out of ATMs with our credit and debit cards, but to no avail. We were OK for getting food and getting into the Art Institute etc. as we could use our cards for payments fine, it was just getting cash that seemed to be the problem. However, when it came to our return journey Stu needed to add 50 cents to his card to make it up to $2.25, but we thought we had used all our cash (and the ticket machines only take cash). By some miraculous good fortune I had exactly 50 cents of change left in my pocket but 10 cents of it was made up with 1 cent coins, and the machine doesn't take 1 cent coins!

Luckily, we found a guard and thought he might be able to change this up for us. Sadly not, and we were growing a bit more concerned. However, a friend of the guard's came along and asked us what the problem was, then kindly gave us a dime (10 cent coin) in exchange for our handful of 1 cent coins. The rest of the journey back was a breeze.

Once back at Chaz's place we all decided to order a deep dish pizza for dinner. It had to be done really while were here, as Chicago is the place where they developed the deep dish pizza. We were intrigued to see just how big these pizzas were. Chaz was telling us that when they order a large pizza it usually lasts them a few days as one slice is usually all they can eat in one sitting!

Once we had picked up the pizza though it was easy to see how filling it was. Just lifting the pizza box was an experience - it felt like it had a couple of house bricks inside! As a treat we all got a slice of cake for dessert then headed back to Chaz's.

We all served ourselves a slice of the pizza and tucked it, and this pizza was really something. It was incredibly thick, but I have to say it tasted really good. Stu and I normally opt for thin and crispy whenever we get a pizza, but this pizza was good.

I was definitely full after one slice though, but Chaz and Stu somehow managed to fit in a second.

We settled down to watch some tv. Chaz had recorded a show called 'Baggage' presented by Jerry Springer. It started off to be a bit like 'Blind Date' but with an interesting twist. Each of the three possible partners come along with some kind of baggage, which is gradually revealed throughout the show. It was hilarious!

Next we settled down to watch Close Encounters Of The third Kind - I don't think I have seen this film in years (not even sure if I had sat through the whole thing in one go before). It was superb, a great film. We managed to fit in our desserts while watching the film - though Stu didn't manage his as he was still so full from the pizza.

A great day in Chicago!